It all started with porcupines in the outhouse.

It’s not unusual for conservationists to trace their “origin story” to youth camping experiences. For many, the combination of nature education, outdoor skills and woodsy mentors helped shape career paths and life passions. That wasn’t the case for me. In fact, some memories of camp still induce anxiety attacks.

For me, the draw of camp wasn’t the campfire. It was what was happening just outside the shadows cast by the campfire’s glow. When no one was paying attention, creatures were at large.

I’d sneak away from the tents and find a campground alive with creatures. I’d follow the deer tracks as they bypassed the tents, I’d search for a sneaking raccoon, I’d flip rocks in hopes of crayfish. And yes, I’d stake out porcupines, hoping to see one visiting the outhouse.

My obsession with these campground critters provided a welcome source of diversion and even solace. And my encounters would teach me how to find wildlife wherever I looked.

The Solace of Porcupines

I initially didn’t believe the stories of outhouse porcupines, and for good reason. Before every scout camp, the older kids would serve up questionable nature facts meant to show their expertise and perhaps instill a bit of fear. On my first campout, there was the snipe hunt where younger boys lined up deep in the woods in the night to call in “snipe”. Snipe are indeed real birds, but they do not fly into paper bags.

When summer camp rolled around, we were warned of carnivorous lizard people. Their footprints and urine glowed in the dark. And yes, the surrounding forest did indeed contain glowing moss, but it was caused by bioluminescence, not human-reptile hybrids. (As an aside, one of the boys most fond of this story now, forty years later, makes social media posts about global conspiracies involving, unbelievably enough, lizard people).

I may have been only twelve years old, but I had read enough natural history to know an obvious tall tale. I could only roll my eyes when, prepping for a group stay at a cabin, I heard stories regarding porcupines that visited outhouses at night. To eat the toilets. The conversation took a horrific turn as junior high students imagined, out loud, the various outcomes of a late-night bathroom break interrupted by a quilled rodent.

Upon arrival to that camp, I immediately strolled over to the outhouse. There was no porcupine. But it was very clear that something had gnawed nearly every wood surface inside and outside the outhouse. It could only be a large rodent, and I realized the porcupine stories were true. The animals were drawn by the salt in urine. And the bathroom habits of boys ensured there was plenty of salt.

I had never seen a porcupine. By this point in my life, I was obsessed with wild mammals. Here was my quest. I started searching. I peered into the outhouse at any opportunity. I’d hide along wildlife trails any free time I had. I’d get up in the middle of the night under the auspices of a trip to the restroom. I devised traps made of sticks and strings.

I kept at it, camp after camp. The porcupines never showed. Plenty of other creatures – deer and striped skunks and racoons – did. I’d pause to enjoy the evening chorus of frogs, and nightjars, and great blue herons returning to roost.

At some point, this became about something more than porcupines. I needed this. It became what made scout camp bearable.

My scout camp more closely resembled Lord of the Flies than Boys’ Life. Scout leaders gave a few boring lessons, and then it was assumed that we’d learn valuable life skills via bullying. It wasn’t all bad, of course. I wasn’t an antisocial kid. But endless Dungeons and Dragons marathons held little appeal. Even less so: stick fighting and pill popping and frying ants with magnifying lenses. And then there was the adult scout leader who would twist my arms behind my back until I begged for mercy. And then he’d keep going a bit longer, laughing maniacally.

The evening wildlife walk was an out. Even if we were in a crowded cabin, I could often slip out without anyone noticing. With a tent, even easier.

I rarely thought about it as an escape. I was so absorbed by the signs of creatures, the questions in my head. Where was that porcupine? Why were the nightjars more concentrated over our camp than deep in the forest?

I was beginning to perceive a weird twist, one never taught in our nature study merit badge courses. Our camp was attractive to a certain set of animals. It provided food, shelter from predators, even habitat. A “clean camp” – which as scouts we all were honor-bound to uphold – was an illusion. Table scraps, toothpaste, even urine offered a wildlife banquet.

Fear and Loathing in Scout Camp

Before my first camp, I imagined we’d go on daily expeditions to see all manner of wildlife. But raucous “nature hikes” surely scared every animal for miles. On my own, standing quietly on the edge of camp, anything could happen. Oftentimes the most fascinating wildlife was not found on a long hike away from camp, it was found in camp. Just by being observant, wherever I was, I could find wild nature. Few lessons have been as important in my career as a nature writer.

A lantern in camp drew luna moths and other insects, striking creatures often glimpsed only after everyone else had tucked into their sleeping bags. The bugs that hit the light and fell to the ground were scooped up by frantic shrews. The firewood piles drew mice which in turn drew snakes.

On the edge of camp, I could often find tracks of other creatures that had passed. When had that deer trotted by my tent? What were those little paws paralleling the stream?

The endless stories of bears and other things that go bump in the night (like lizard people) added an element of terror to my expeditions. But usually, it wasn’t the wild animals I had to fear.

Once my brother and I walked a creek looking for minnows and crayfish, eventually ending near another troop’s campsite. Enemy territory. A boy several years older approached with a handful of fireworks. He began lighting them as my brother and I scrambled up the bank. He pitched a large firecracker and it arced right down my shirt, blowing up on my collarbone. I was left with a burn and ringing ears.

Another time, I strolled back after an early morning outing at our winter cabin camp. As I reached for the door, a piercing blow to the face dropped me. Tears welled and my head spinned at the sharp pain. I looked up to see a hulking man, one of my fellow scout’s parents, looming over me.

He told endless stories about his nearly making the Major Leagues. The rumor before this trip was that he had frozen a bunch of snowballs, which he would use on wayward scouts. I chalked this up as yet another bit of camp myth. I was wrong. I was the example. I had been beaned by a power iceball.

“No going out without another scout,” he announced. “That should teach you. No more wandering.”

I wandered anyhow. By that point, the way I saw it, I didn’t have a choice. It was my way of life.

On the Edge of Camp

By high school, I participated in camp opportunities beyond the scouts. The experiences improved. At these camps, I no longer needed an escape. But still, most evenings, I’d go out on my own and look around. Just to see what was out there.

I received a scholarship to attend Pennsylvania’s Conservation Leadership School, a two-week high school program situated at a lake and forest reserve owned by Penn State. We stayed in tents. I recall our first evening’s campground discussion revolved around evolutionary biology, which surprised me in a good way. And the campers enthusiastically joined in, which surprised me in an even better way. I was with my people.

I loved every minute of that camp. And yet, one evening I felt like I was so caught up in the program, I hadn’t checked out the surrounding area. I crawled out of my tent, well past curfew, bringing my fishing rod with me. I caught a couple of bass in the dark night. I heard a loon, a bird I had never encountered in Pennsylvania.

And coming down the trail I saw my group leader, a marine biologist named Kevin. Kevin loved marine invertebrates but he engaged me on every nerdy obsession I brought him. Rodents, fish management, the ethics of hunting. He gave me things to read, offered counterpoints to my arguments. I was a straight-laced, rules-following kid. And I knew now I had let him down.

He cut me off. “No need to apologize,” he said. “Why do you think I’m out here? For the same reason you are.”

Years later, I lived near that lake as an employee at Penn State. I’d visit several times a week to fish for bass. I’d be surprised just how often I’d see a kid sneak off from camp and stand by the edge of the lake. Sometimes with a fishing rod, sometimes with binoculars, sometimes just standing there.

I have friends today, serious hikers and backpackers, who will tell me they didn’t see much wildlife on their latest expeditions. There was phenomenal scenery and hot springs and waterfalls. But the wildlife didn’t show. And I think: how is this possible?

Because wild animals love campsites. I have retained a soft spot for the creatures that live there, that show the barrier between the human world and the “wild” exists only in our heads. There are the Steller’s jays that circle when we start cooking. Golden-mantled ground squirrels that pop out of their hole to snag a crumb from a picnic.

And chipmunks: there are 22 species in the United States, and their color patterns are surprisingly varied. The optimal way to see them is to visit national parks in different habitats. And the best place to see them in national parks is campgrounds. They grow fat and happy there. To the mammal enthusiast, they’re kind of like warblers. Most others never see them.

I’ve seen spawning salmon and endangered island foxes, been surrounded by raccoons and awakened by wolves, all without leaving camp. The wild was not just on some distant peak but what was right around me.

On our latest backpack trip, my 5-year-old son immediately began catching scuds and tiger beetle larvae for what he dubbed his “aqua-zoo.” We saw mountain goats and a golden eagle. And then, one evening, my campground wildlife encounters seemed to come full circle.

My son had been using the same tree for night-time potty breaks. And that evening, a mule deer came in and began gnawing on the tree, much as I imagined the porcupines of my youth. So enthusiastic was the deer that it barely paid attention to our presence. My son, in his version of an experiment, wanted to set up another “salt lick” on a nearby log, to see if that is why the deer was really coming to this tree. Without going into the experimental design: It was.

The laughter this brought to my son made me think about scout camp. And I admit, I wanted to protect his innocence and wondered how much I’d worry when it came time for him to go off to tent with a bunch of other kids. But I hope that when the going gets tough, or boring, or he just needs to step away, the wild things will be there. Not somewhere far away, but right there. 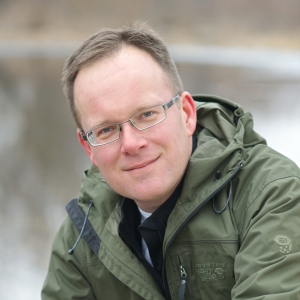 Matthew L. Miller is director of science communications for The Nature Conservancy and editor of the Cool Green Science blog.