Offshore wind resources are being rapidly developed in the United States, particularly on the East Coast. In addition to providing clean energy, a new report demonstrates that wind turbines can also enhance fish and marine life habitat by incorporating nature-based design principles.

The report, “Turbine Reefs: Nature-Based Designs for Augmenting Offshore Wind Structures in the United States,” details options that can be integrated in or added to the design of offshore wind infrastructure to create suitable habitat for native marine species. Commissioned by The Nature Conservancy, it offers a first look at the ecological, logistical and engineering considerations for incorporating such designs and provides a catalog of U.S. vendors that are already geared up to supply materials.

It is important to protect offshore wind turbine foundations from scour, which is the redistribution of sediments away from the base of the turbines caused by currents and wave energy. The report details ways that scour protection can serve the dual purpose of fortifying the turbine while also providing enhanced habitat for marine species.

A key element emphasized in the report is enhanced scour protection layers, a combination of large and small structures with various-sized holes (and/or rocks) with a range of shapes and sizes that increases habitat complexity. This provides shelter for larger species and suitable refuge for juveniles and smaller creatures.

The report also suggests mimicking natural hard bottom habitat, an important and sometimes limiting ecological feature in the region, and using material designed to promote growth of shellfish and other organisms. 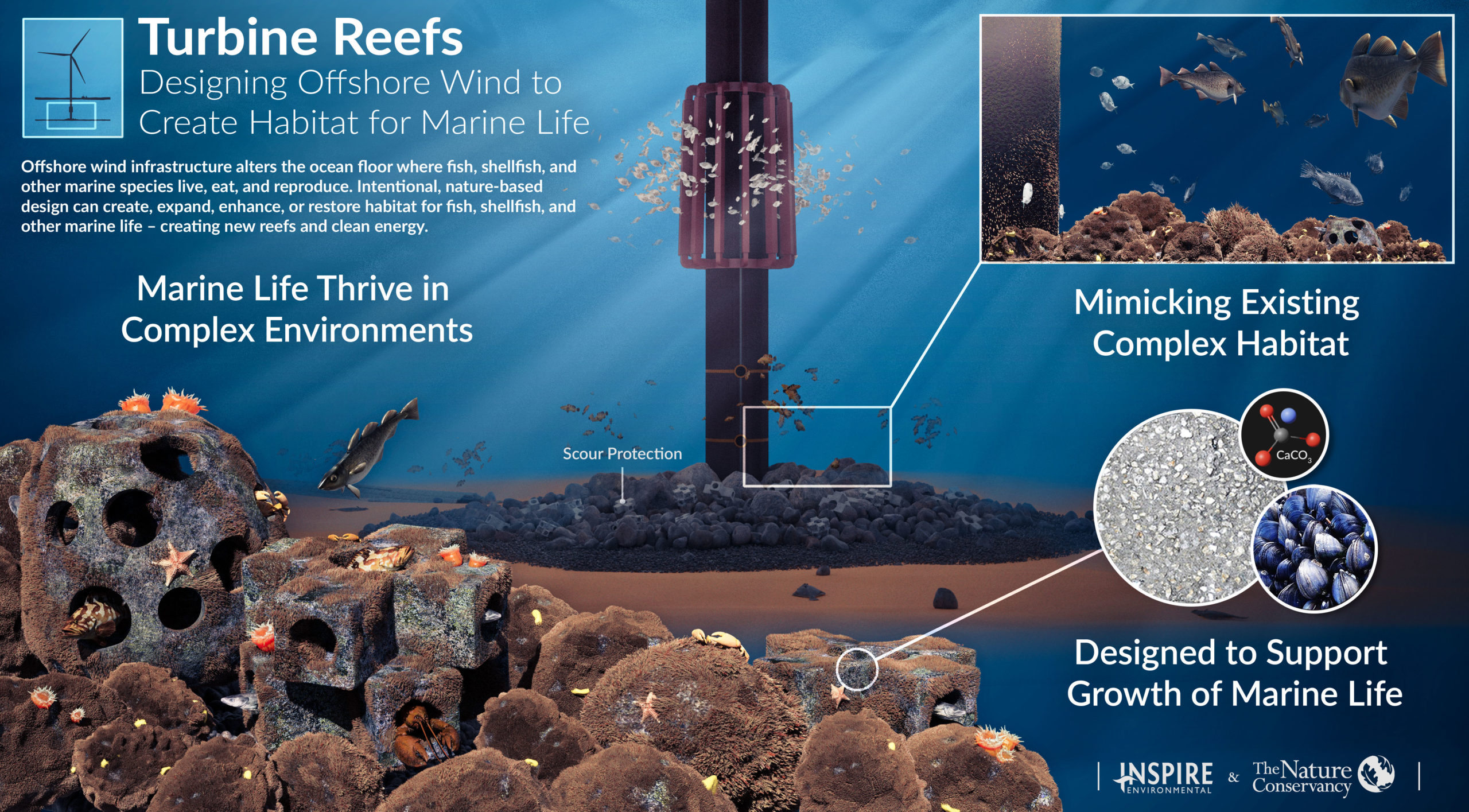 Offshore wind is already common in Europe and Asia and is being increasingly developed in the United States. The U.S. Bureau of Ocean Energy Management has created 15 commercial offshore wind lease areas along the U.S. East Coast, with planning underway for additional areas in New York, South Carolina, California and Hawaii.

There are currently seven offshore wind turbines operating in the United States, five in Rhode Island and two in federal waters off the coast of Virginia. These wind turbines have already become known for their fish habitat, a fact not lost on anglers in the area. The waters around the five turbines near Block Island, Rhode Island, has become a favorite place for recreational anglers and charter boats.

“You go to Block Island, and you see lots of recreational anglers fishing right on top of the turbines,” says Captain Dave Monti, a charter boat operator with No Fluke Fishing. “Moving forward, anything we can do to enhance the pylons will have even more of a benefit.”

“With a little extra thought, there’s great potential to enhance and protect fish habitat as part of the buildout of offshore wind energy,” says Carl LoBue, New York oceans and fisheries manager for The Nature Conservancy.

When addressing the impacts of development, conservationists often refer to a mitigation hierarchy that focuses on avoiding, minimizing and where necessary mitigating impacts. The idea is to return conditions as close to the baseline as possible. But with Nature-Based Designs applied to offshore wind farms, there is an additional opportunity.

“This concept isn’t exclusively about mitigating impacts,” says LoBue. “It’s about the potential to create new habitat. By incorporating Nature-Based Design, we could expand or enhance habitat above the existing baseline. We can actually make things a little better for some marine life.”