If you grant most birders some free time, their thoughts turn to numbers. They plot big days and big years. They plan trips to see dozens or even hundreds of species. They twitch and tick boxes in their field guides and apps.

British naturalists Vic Fairbrother and Ken Hutchinson took a different approach. They focused their watching on one species of bird, in one specific area. For 20 years. In doing so, these “amateurs” contributed greatly to the knowledge of one of Great Britain’s least-known birds, the ring ouzel.

The ring ouzel is an attractive little thrush, with a black body and a striking white collar. Due to its upland habitat and secretive ways, most never see one. And the ouzel’s population has been in long-term decline.

They recently published their observations in an enjoyable book, The Ring Ouzel: A View from the North York Moors. As they write in their introduction, “We cannot recommend highly enough the rewards of undertaking a single species study – we only wish we had started sooner!”

It’s the opposite of twitching, and a way to contribute to research and conservation wherever you live.

I recently had the chance to join Vic and Ken via Zoom, and they discussed the details of their project.

In 1998, Ken was looking for a “bird project” that he could do upon his retirement. He was particularly drawn to the upland habitat of the North York Moors, as this was a habitat he had spent many enjoyable hours walking and exploring as a child.

“I wanted to learn a lot more about a bird species and study it and get to know it,” he says. “I wanted to leave something for others to perhaps carry on and take further.”

At the same time Vic was participating in voluntary bird studies in the United Kingdom. He participated in an upland bird conference and learned that ring ouzels, an upland species, were experiencing a worrying decline.

The two men decided to join forces to carry out a study on ring ouzels, a thrush species that most British hill walkers never notice.  “It’s not only not common, it’s an elusive bird,” Vic says. “It’s one of the least-studied birds in the UK.”

A Sense of Wonder

The two men set out to see if ring ouzels were stable or declining at their local national park. They ended up documenting breeding sites, breeding and nesting behavior, feeding habits, predation events and human impacts – all meticulously reported in their book The Ring Ouzel.

“We were out there for hours, days, weeks, year after year,” says Ken.

And they clearly never lost their enthusiasm. In fact, as they spoke with me, these two retired men radiated a youthful enthusiasm for the birds, how they often swept around the back of them to avoid detection, how they constructed their intricate nests with just their bills.

“I think of it as slow birding,” says Vic. “You need to focus your attention and concentrate. I didn’t want to rush from place to place, always in a rush.”

Ken adds, “Sitting and watching one species, all these details start to be revealed. The more you learn, the more questions you have.”

While both insist they are amateur ornithologists, their study provided critical information on a poorly understood species. They participated in the UK Ring Ouzel Study Group, comprised of like-minded individuals in the United Kingdom and Continental Europe. Their studies nicely complemented a similar long-term study, conducted by professional ornithologists, in Scotland.

The Role of Citizen Science

These two took this dedication to citizen science even farther. Their book details a lot of natural history, including some never-before-recorded courtship behaviors. But even more important, this information can help conservationists understand the birds’ decline. Two key factors are first-year survival and adult return rates. 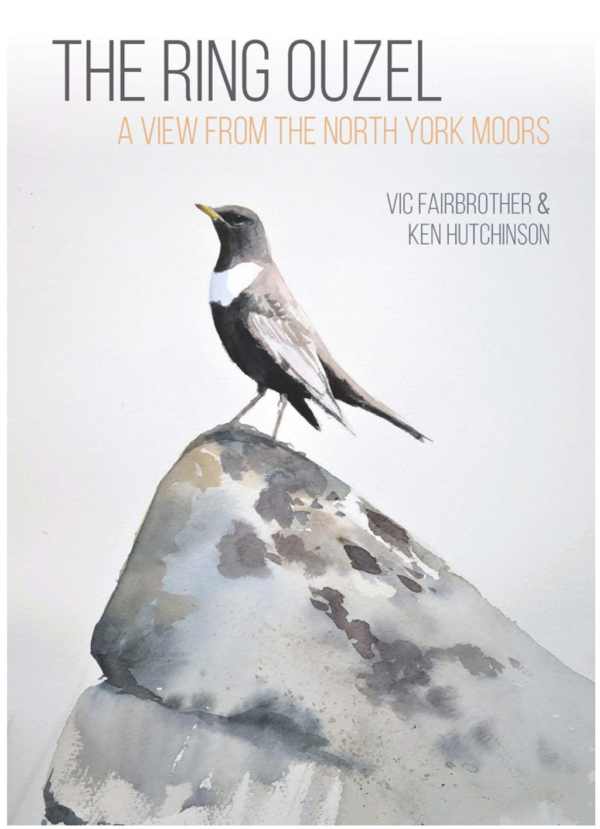 Ring ouzels face numerous threats, from habitat loss to disturbance from humans recreating in their habitat to being directly killed by people along their migration across Europe. The authors note in The Ring Ouzel that climate change is likely a significant factor in the decline, and many areas where the bird is found, particularly in the North York Moors, may become unsuitable in the future.

“Our amateur study was able to contribute quite a lot of information to efforts to understand the bird,’ says Ken. “It helped build a picture of what these birds are facing.”

The Ring Ouzel helps paint that picture, a study of a bird species in a specific place. In some ways, it reads like a piece of natural history writing from another era – and I mean that as a compliment. The book conveys the joys of observation, of hiking and hiding in wild places, of making discovery.

But the great thing is this: this study didn’t take place in the past. This adventure and the ability to contribute to science and conservation is available to anyone with some free time. These two retired men devoted their time to an easily overlooked bird, but there are thousands of other under-studied species out there.

“Anyone can contribute to our understanding and appreciation of the natural world,” says Vic. “The best part of it is that you are recreating the wonder you had as a child. When we would find a hidden nest, it just sparks something inside. That is available to anyone, and those field observations still can make a difference in the world.”