Wingspan and Other Tabletop Games for Naturalists

Last year, Stonemaier Games created quite a flutter within both the birding and board gaming communities with the release of Wingspan. The game, by designer Elizabeth Hargrave, was an instant hit. It sold out a 10,000 unit printing before I even had a chance to jump on the bandwagon. For much of 2019 and early 2020, unopened Wingspans were being sold on the second-hand market for prices that fell somewhere between black-market bathtub kidneys and Tickle Me Elmo.

As 2020 progressed, I continued to see social media posts of friends locked down with loved ones, building cherished memories as they competed head-to-head growing their Wingspan flocks to victory. I recently joined the 13,000 member Wingspan Facebook Group only to see that my good friend Alyssa had posted to the page just 6 hours earlier. My household is literally late to the game on this one, but I’m so excited that our copy of Wingspan has arrived just as we are hunkering down for a pandemic winter in the Midwest.

My initial impression of Wingspan is that it is visually stunning. A cover-worthy specimen, Oklahoma’s state bird, the scissor-tailed flycatcher, soared to the top of the box. Other bird stars on the box include the ruby-throated hummingbird, eastern screech-owl, western tanager, and Carolina chickadee. These are some of the most powerful cards when it comes to game play, and I hope this was a subtle hint that was curated into the layout.

For board game enthusiasts, Wingspan is a “competitive, medium-weight, card-driven, engine-building board game,” according to the Stonemaier Games webpage. The game can be played with 1–5 players, ages 10 years to adult. Games take roughly 40-70 minutes to complete.

For bird folks, the objective of Wingspan is to populate your habitat-based playing board with a diversity of bird species. Points are accumulated for the birds, eggs, cached foods, tucked cards, and various bonus scenarios. 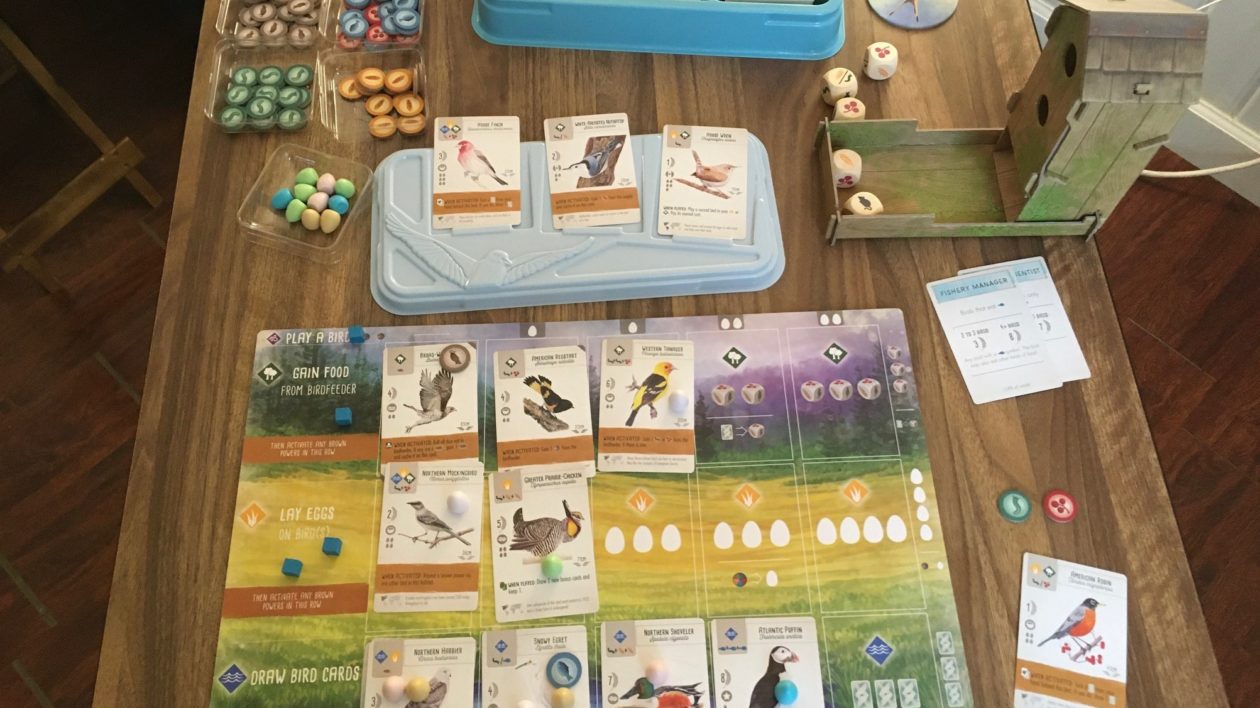 Each player gets 26 turns to create the highest scoring nature preserve possible. Each turn is kicked off with one of four actions: play a bird, gain food, lay eggs, or draw bird cards.

The engine-building design of Wingspan means early plays can be maximized throughout the rounds. The actions pay bigger dividends late in the game.

A couple of features that are especially helpful for new gamers are the online tutorial videos and optional template scenarios used for starting a game. The videos by Watch It Played and Quackalope Games help navigate the logistics of a turn. The templates map out the first 4 turns of a game helping ensure you’re on the right track. This also reinforces the mechanics of the game and the steps of play.

Kudos to illustrators Natalia Rojas, Ana Maria Martinez Jaramillo, and Beth Sobel, for their collective attention to detail on the species cards. Although their online shop is temporarily closed to “concentrate on creating new artwork for Wingspan,” it brings me great joy knowing that prints of Wingspan birds are available.

The Game That’s a Field Guide

Cumulatively, the deck of cards serves as an introductory field guide to 170 species of North American birds. The natural history of each species is reflected on each bird card.

Habitat and food preferences are noted, as well as information about nest types and relative clutch sizes.

The Wingspan team clearly did their homework. Brown-headed cowbirds are notorious in the birder world for their egg dumping strategy, and this is reflected in game. Instead of building a nest and laying eggs, the action for the cowbird card is to lay an egg on a different cup nesting species card. The wingspans of birds are also shown, and these become important for some of the bonus cards.

The range maps are only meant to reference which continent the birds are found on. This general range reflects migratory species, and birds like barn swallow and osprey that have wide distributions.

This is also intriguing as the European and Oceania expansion packs are hitting the market and can be integrated with the original North America deck. 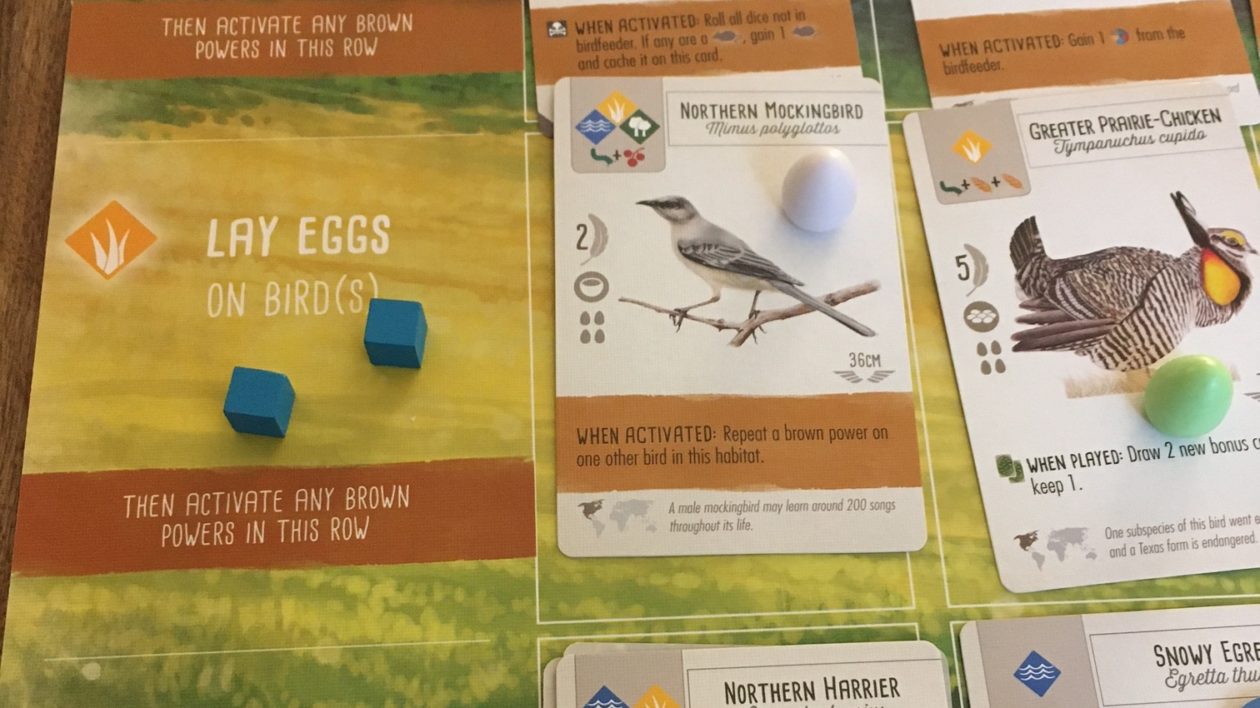 Each bird species has a fun fact included on the card. These don’t impact the game at all, but the naturalist and environmental educator in me beams with pride every time my wife reads aloud a nature nugget she finds especially fascinating.

Did you know that the scientific name for the Lazuil bunting (Passerina amoena) translates to beautiful or charming? My beautiful and charming wife didn’t, and honestly, though one of my prized possessions is a copy of Latin Names Explained by A.F. Gotch, neither did I.

For board gamers, Wingspan is a breath of fresh natural air in the widely popular genera of engine-building games. Many engine-building scenes play out in alternative science fiction realities or medieval times.

For fledging gamers, birds can be an easily relatable theme, and for experienced gamers, the setting is new and inspiring.

Much to my wife’s relief, I can play Wingspan by myself. According to Nick Murphy of YouTube’s You Can Solo That, the Automa feature for the self-play of Wingspan is especially well executed. Murphy laments the “simple, clean, and easy” play of solo Wingspan. He “loves hard solo games,” continuing,  “I also love the fact that it has 3 different difficulties.”

The Automa opponent puts all of their eggs in one basket, so to speak. The point generating options for the solo opponent are limited, so the design structure cranks out eggs. Don’t be discouraged though, you’re building an ecosystem of points with birds, eggs, cached foods, and tucked cards.

Is the Natural History Correct?

From a natural history perspective, my complaints are few and arguably superficial. The pine siskin beak seems a bit thick to my eagle eyes. The designers went with painted whitestart instead of painted redstart.

Both are acceptable names, and Cornell Lab of Ornithology points out that despite the shared common name, these two starts aren’t closely related. Perhaps we can petition the naming committee of the American Ornithological Society to consider officially adopting the Wingspan version in future checklists.

The birdbox tower for rolling dice is clearly a nod to a birdhouse, but the dice are food choices. My years as a professional birdseed salesperson made me cringe at this choice. It’s hard enough for many folks to keep birdfeeders and birdhouses separate, but I’m obviously overly sensitive to such technicalities. These are all admittedly minor details that don’t detract from my enjoyment of Wingspan for a second.

You better believe that in addition to my binoculars, I’ll be packing Wingspan on my next trip back home to Wyoming. My family should be fully prepared for hours of games and bird watching.

They won’t be surprised though. They planted the seeds of interest in these hobbies decades ago. The engine-building actions of my own life have all led to this moment of happiness combining birding and board games. Thank you Stonemaier Games for Wingspan.

Wingspan lies at the intersection of board games and nature. This interface has a modest history. Here are some others that may of interest to gamer-naturalists.

Mariposa, by Wingspan designer Elizabeth Hargrave, was released by Alderac Entertainment Group during the 2020 Summer. The game follows the journey of the migrating monarch butterflies.

Evolution, a North Star Games strategy title, is continuing to release expansions. Over 12,000 different species combinations are possible as players “adapt their species to eat, multiply and thrive,” according to company. Avian artist and Zeiss Optics Ambassador Catherine Hamilton was an artist for the Evolution series, and the vibrant characters nearly jump off the cards.

The National Parks have been themes for numerous games, but a game about a National Trail is my favorite in this realm. A combination of nature knowledge trivia and chance help the Appalachian Trail Game replicates a thru-hike. A portion of game sales are donated to support the Appalachian Trail Conservancy.

Photosynthesis, by Blue Orange games, plays out with beautiful 3-D trees. Blue Orange suggests players, “carefully pick where you sow and when you grow, as trees in the shadows are blocked from light, and from points.” The game is noted for realistic gameplay and beautiful graphics.

As opposed to Photosynthesis, another personal favorite of mine isn’t about growing trees. Instead it’s a game of harvesting them. Flapjacks and Sasquatches by Prolific Games is a breezy game where loggers accumulate points by harvesting silver maples, red oaks, Norway pines, and other trees. Beware of Sasquatch disruptions though.

Genius Games has two releases that take me back to college. Peptide: A Protein Building Game is a game that sounds more straight-forward than my physiology class, (no offense Dr. Harlow), and Ecosystems, which sounds like the board game equivalent of my degree in Wildlife Biology and Management.

The widespread success of Wingspan and these other endeavors will hopefully expand both the tabletop game and natural history hobbies, while providing a bit of cross-pollination between complimentary interests.