BirdCast: It’s Like a Weather Forecast, But for Birds

When I first became a serious birder 15 years ago, I wished there was a way to easily access historic birding data. What could you see at this park in October? That kind of information just wasn’t easily accessible. Then came eBird.

Once I started learning how to identify birds by ear, I longed for a tool that could help me identify that weird bird call I was hearing. Then there was Merlin SoundID.

And as I became a die-hard bird nerd, I’d plan my spring and fall travel around migration. I knew April-May and September-October were the best months, but there was no way to know if any one day or week was going to be particularly good birding. That is… until BirdCast came along.

BirdCast provides real-time predictions of bird migrations: when birds are migrating, where they’re going, and how far they’re flying. The sheer scale of the data is incredible, and it will change the way you bird during migration.

From Enemy Aircraft to Birds

BirdCast uses the same weather radar data that you’d see on your nightly weather broadcast to predict the numbers and flight directions of migrating birds.

Radar technology was developed to detect enemy aircraft during World War II, and then quickly expanded to its current application in weather forecasting. Yet early radar engineers were puzzled by strange dots on their screens that didn’t correspond to known aircraft or storm systems. Eventually, two ornithologists worked out that radar could also detect masses of migrating birds. That was the beginning of a new scientific field: radar ornithology.

As computing power and data storage grew, researchers developed computer algorithms to separate bird detections from meteorological phenomena, or aircraft, or insects, or even bats. By 2018, the technology was advanced enough that BirdCast could bring real-time migration forecasts directly to birders in the United States. The freely available tool is a partnership between the Cornell Lab of Ornithology, Colorado State University, and UMass Amherst.

(For a more in-depth look at the history of BirdCast, look here.)

The BirdCast site has a variety of tools you can use to up your birding game:

We recommend starting with the three-day forecast maps, which are the first maps you see on the BirdCast homepage. These maps show the predicted nocturnal migration 3 hours after local sunset. They cover a three-day period (one map per day) and are updated every 6 hours. The lighter the color, the more intense migration will be. The maps also incorporate weather systems, which can affect migration at a local scale. 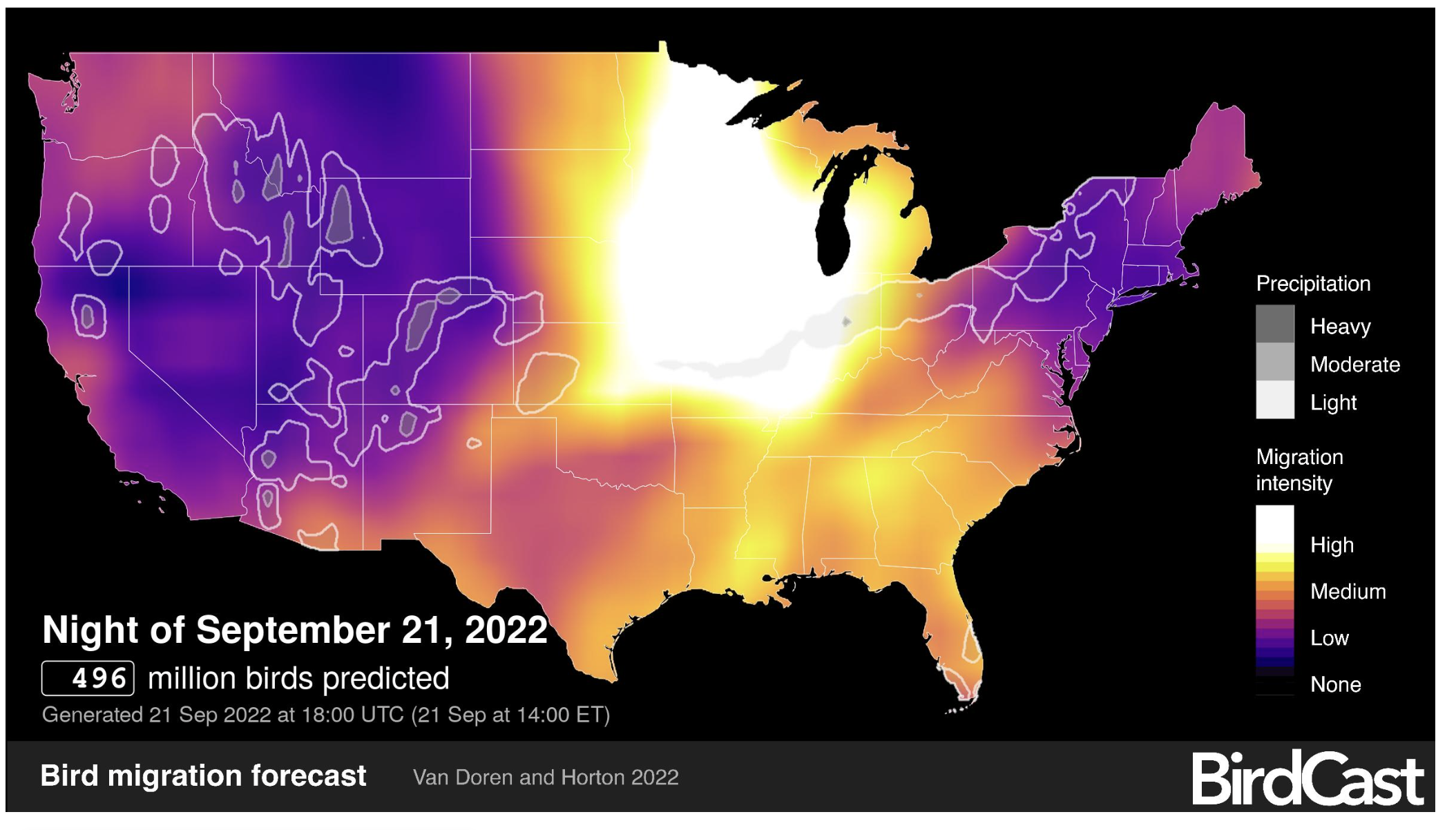 Just like weather forecasts, these maps combine several variables: wind speed, direction, barometric pressure, temperature, and 25 years of migration data. They should give you an idea of what migration will look like over the coming days.

Next, scroll down to the second map, which shows real-time information on the intensity and direction of migration, as detected by weather radar between local sunset and local sunrise. These maps have a similar color scheme, noting migrating intensity, along with arrows to show the prevailing flight directions. By hitting the “Play” button in the lower left, you can watch the live data as the night progresses. 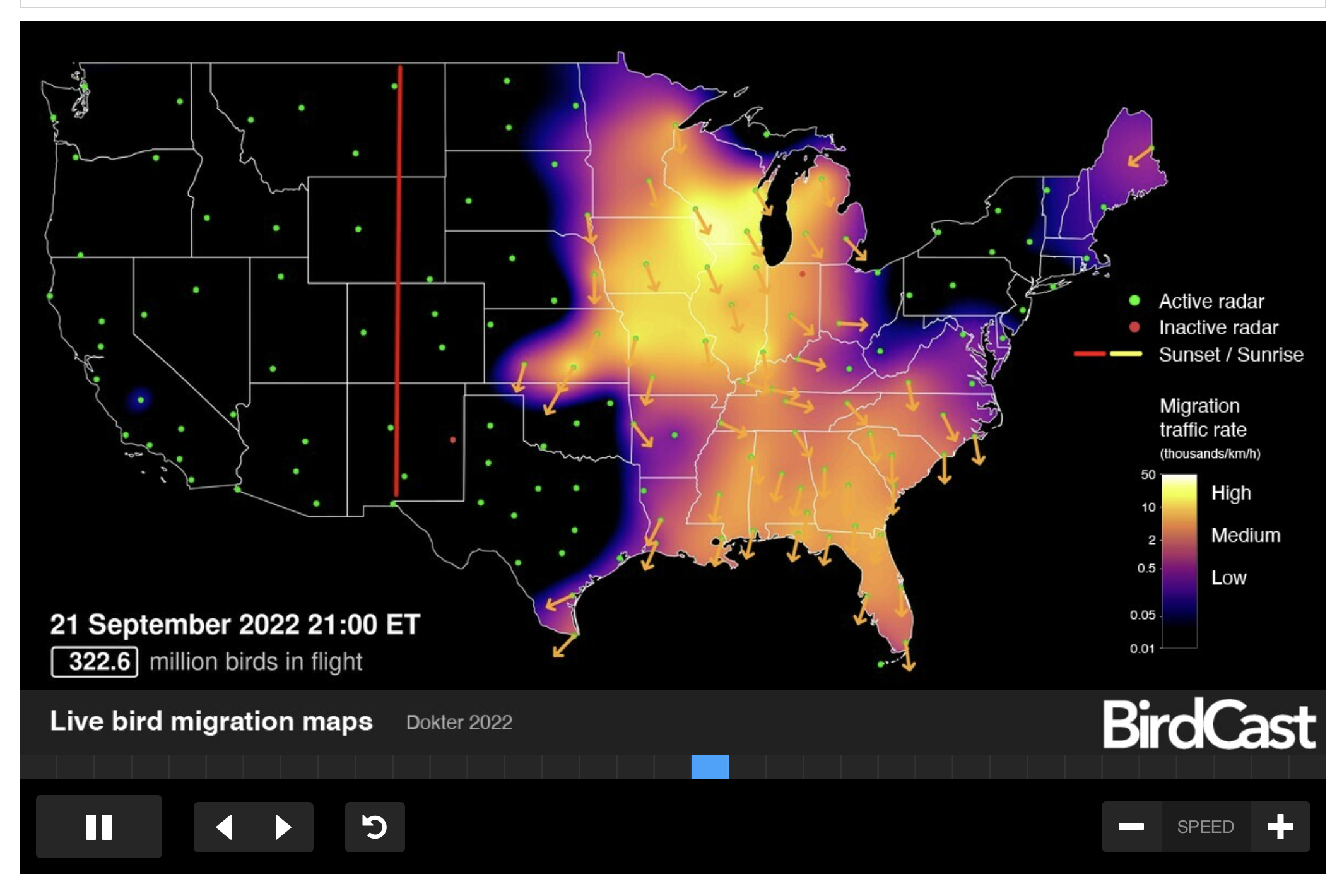 But wait, how does knowing where birds are at night translate into better birding?

All of those birds flying overhead have to land each morning to rest and refuel. Knowing the relative intensity of migration in your area can help you pick the best days to head out with your binoculars for some migration magic.

Before you leave in the morning, check the Migration Dashboard for county-level data. This is the tool that will tell you what to expect at your favorite birding hotspot.

The amount of detail here is somewhat mind-boggling. BirdCast can tell you the number of birds in flight (during the previous night), their flight direction and speed, as well as their altitude. And by integrating eBird data into their predictions, BirdCast gives users a list of the birds that are flying overhead, and that you’re most likely to see during the next day’s birding.

If you don’t have time to check BirdCast every day, you can sign up for the migration alerts that notify you when intense migration is occurring in your area.

And while we’re talking bird tech… If you haven’t already checked out Merlin Sound ID, drop what you’re doing and download the app right now.

As CGS writer Cara Cannon Byington notes, Merlin Sound ID is like Shazam, but for birds. When you hear an unfamiliar bird sound, just open the app and start recording.  Merlin magic does the rest, using spectrograms Cornell’s vast repository of sound data to identify whatever you’re hearing.

It’s not an understatement to say that my jaw dropped the first time I used it. Sound ID currently covers North America and Europe, with plans for further expansions. I’m counting down the days until they add Australia.

Now get out and go birding.