Shrikes: Meet the Bird That Impales Prey on Spikes

The desiccated lizard hangs lifeless on fence, impaled through the gut on a barbed-wire spike. A few meters away, a dead bee protrudes from another twist of metal.

Who killed them? And why? As it turns out, this real-life murder mystery has a surprising avian culprit: the shrike.

Also known as butcherbirds, loggerhead and northern shrikes leave a culinary horror show in their wake. Both species regularly impale prey — often still alive — on spikes, thorns, or barbed wire, and leave them there for days or weeks.

We dive into the fascinating story behind shrikes and their grisly table manners.

A Tale of Two Killers

If you’ve ever come across a small animal impaled on a spike, odds are it was killed by a shrike. But which species? There are two types of shrike in North America, the loggerhead shrike and the northern shrike.

Both species are remarkably similar: they’re about the size of a robin, with a dark, hooked bill, grey body, and black-and-white wings. Both birds also have prominent white wing patches that are visible in flight and a black band through the eye.

Getting a good look at that band is key to telling the species apart: Loggerheads have a slightly chunkier body and a thicker band that covers the top of bill. Northerns have a slimmer band that narrows as it meets the bill, and does not cover top of bill or go over eye. (For more shrike ID tips, check out this guide from Audubon.) 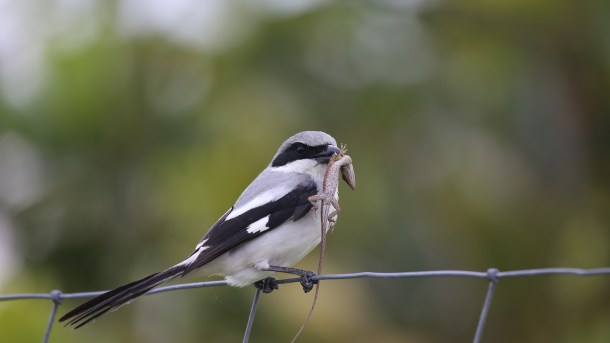 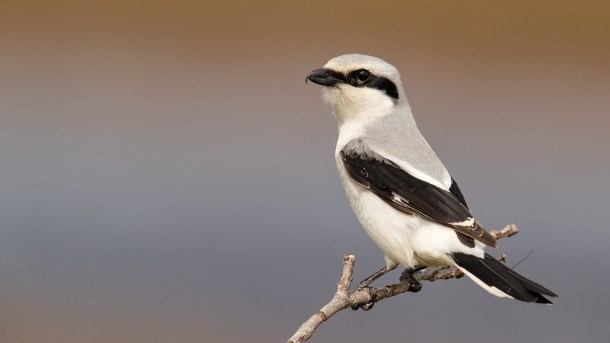 Another good way to tell the species apart is their range. Loggerheads are found year-round in the bottom half of the continental United States, and in the summer they migrate north to the Rocky Mountain states and Midwest. (But not the mid-Atlantic or New England.)

Northern shrikes have, unsurprisingly, a more northerly range. In the summer they breed in Alaska and farther northern Canada, where the tundra meets the taiga. In winter they migrate south, ranging through the northern half of the continental US. (They venture a bit farther south in the western states, to around the Colorado-New Mexico border).

Both species live in open, brushy habitats like grasslands, prairies, desert scrub, and savannahs. Shrikes are also common near human development, where they inhabit agricultural fields, pastures, old orchards, riparian areas, golf courses, and even cemeteries. They’re commonly seen along roads, searching for prey along the mowed strip of grass.

Anyone Hungry for Shish Kebabs?

Shrikes eat, well, just about anything. Loggerheads will consume arthropods, amphibians, reptiles, small mammals, and even other birds. They tend to eat more insects during the summer breeding season, and then add a little more variety in winter. Northerns have a slightly pickier palate, tending to eat fewer reptiles.

Both species hunts like miniature raptors: they wait on an exposed perch and watch the ground below, diving down on their prey from above. (Loggerheads will also hover-hunt, like kestrels, or flash their wing patches to startle prey out of hiding.)

Then it gets gruesome.

Shrikes might hunt like raptors, but they lack talons to pin their prey down. And when you hunt prey almost as large as yourself, that’s a serious drawback. So shrikes grasp prey in their hooked beaks and fly it to the nearest pointy object, like a cactus spike, branch, or barbed wire spike.

Then they impale the animal to both immobilize and kill it. If there’s nothing spikey at hand, shrikes will also wedge prey in the crook of a tree branch.

The shrike can either pick its prey apart, bit by bit, or leave it for later. These food caches are called “pantries” or “larders,” and they provide a critical source of food when prey is scarce in winter, or when the birds need extra nutrition during the summer breeding season.

Sometimes, caching prey also helps make it more palatable. In the southern US, shrikes prey on the toxic lubber grasshopper, Romalea microptera. Leaving the insects out to dry for a few days allows the toxins to degrade, making them safe to eat.

The impulse to impale is hard-wired into shrikes, and people have even observed juvenile shrikes practicing by impaling leaves on tree branches near their nest. Adorable… sort of.

Come on Baby, Let’s Do the Twist

Things get even more interesting when shrikes take on a big meal.

Loggerhead shrikes often hunt prey as large as themselves, so the birds have a special hunting method for taking down these supersized meals. Scientists discovered this unique technique by analyzing high-speed video of hunting shrikes to figure out just how they kill large rodents.

First, the shrike grabs the rodent from behind, clamping down at the base of neck and pinching the spinal cord to paralyze the animal. Then the shrike shakes its head back-and-forth to break the rat’s neck.

That might sound simple, until you learn that the back-and-forth whipping motion generates accelerations of up to 6 g-forces, or as Audubon describes, “roughly the same amount of force felt by passengers on high-g roller coasters, or the whiplash experienced by victims of low-speed, rear-end car crashes.”

Shrikes Around the World

Northern and loggerhead shrikes are just two of the 33 shrike species worldwide. Their family name, Laniidae, is derived from the Latin word for “butcher,” and shrikes are also known as butcherbirds.

Most of the 33 species are found in Eurasia and Africa; there are just 2 in North America and one in New Guinea. (You can find several species of butcherbirds in Australia. These birds aren’t shrikes, but they occupy a similar ecological niche.)

Nearly all shrikes live in open habitats, and they all share the same general grey / brown / black and white coloration.

With killer hunting moves and a diverse diet, you might think that shrikes are relatively safe from threats. Think again.

Loggerhead shrike populations are declining across much of their range. Data from the North American Breeding Bird Survey shows that, between 1966 and 2015, the species declined by almost 3 percent a year. That works out to a cumulative decline of 76 percent during the past 50 years.

According to the Cornell Lab of Ornithology, the population decline coincides with the increased use of chemical pesticides from the 1940s and the 1970s, possibly because the birds are eating pesticide-laced insects near treated fields.

Other threats to loggerheads include vehicle collisions when they hunt near roads, the loss of hayfields and other pasturelands to development, other forms of habitat destruction, and changing prey populations due to livestock grazing.

We know much less about northern shrikes because they are relatively rare and occupy such remote habitats.

Hopefully, scientists and conservationists can pinpoint the causes of shrike decline before it’s too late. Because — as gruesome as it may seem — there’s something wonderful about finding a fence line decorated with little bodies, and knowing that a shrike lurks somewhere nearby.