Hawks have moved into our backyards. And many people seem to find their new neighbors terrifying.

I recently downloaded the Nextdoor app, the “social network for your neighborhood community,” to keep track of road closures and new developments in my rapidly growing community. It served that purpose, but it also gives me sometimes-startling insights into my neighbors’ concerns.

Chief among those concerns is wildlife: Coyotes, bobcats (or bobcats misidentified as mountain lions), deer, and, lately, hawks. Yes, hawks.

Hawks show up a lot in suburban and urban environments this time of year. They are feasting on the bounty of songbirds that are drawn to bird feeders. Many see those large, stealthy predators and worry about their pets.

Recently, there have been a number of hawk photos posted, often with warnings: These birds are in our neighborhood! Watch your pets!

The comments often feature stories of beloved cats and small dogs being carried off by hawks and owls.

Should this really be a concern? Does it happen often, or at all? Let’s look at the reality of birds of prey and pets.

Your friend (or more likely, your friend’s cousin’s coworker) sits on the back patio, enjoying a cold beer or six. But there’s one problem: a yapping poodle (always a poodle) just won’t shut up.

But suddenly the annoying dog gives out a yelp in alarm, as a ginormous hawk drifts overhead. The poodle sprints towards its home, but it’s too late. The hawk snatches Fifi in its talons and lifts her into the sky. The poodle’s yips are replaced by the owner’s anguished howls.

I’ve heard and read countless variations of these stories. They often follow a standard plot. Such tales almost always involve secondhand source material and copious consumption of alcohol (by the storyteller, not the hawk or the poodle).

Let’s put this to rest: these stories are urban (or rural) legends. They are simply not true.

A hawk cannot fly while carrying more than its body weight. The wings are not that strong and it’s physically impossible.

Let’s look at this further. Hollow bones and fluffy feathers make birds look like they weigh more than they actually do. The biggest North American hawk you’re likely to see in your backyard is the red-tailed hawk.

A red-tailed hawk weighs, at most, 3 pounds. A miniature poodle weighs in around 12 to 15 pounds. Even carrying a smallish Chihuaha would require a significant feat of strength.

I have observed many red-tailed hawks and other raptors hunting over the years. They are powerful birds, but I’m routinely struck by just how small their prey is. Rodents, snakes and nestlings are all lightweight dinners. When a hawk does catch something larger, it might struggle with flight for a short time, but ultimately it likely consume larger items on the ground. A mallard, weighing in at around 3 pounds, is usually far too unwieldy and heavy for a redtail to handle.

This brings up an important point. A redtail is not going to carry off your dog. But if you have a small pet, a large hawk could injure or kill your pet. It’s unlikely, but it could happen.

How about other raptors? The species that most likely hunt around your birdfeeders, like the Cooper’s hawk and sharp-shinned hawk, barely weigh a pound. They hunt prey like quail, songbirds and squirrels. These birds admittedly look fierce. It’s easy to ascribe human attributes to them.

Looks aside, but Cooper’s hawks are not going to carry off or kill your dog or cat.

Many birds, including raptors, may swoop at you or your pet if you get too close to their nests. I suspect that many observations of “attempted predation” are simply a Cooper’s hawk trying to chase a cat or dog away from its young.

On Owls and Eagles

Great-horned owls are common in many different habitats of North America, and this time of year you can often hear them hooting. These birds are also large and adaptable predators. Many media sources repeat the claim the great-horned owl is the “weight lifter” of the avian world, capable of flying with a prey animal several times heavier than its own body weight. There is no evidence to back up this claim.

Again, the confusion may reside in the fact that a great-horned owl can kill prey much larger than it is. It will then gulp parts of it and return to the carcass for more. Great-horned owls eat a lot of small rodents, as picking through their owl pellets readily demonstrates. But they survive among humans by being generalists. They famously are one of the few predators to hunt and eat skunks. There is really no reason why they wouldn’t eat house cats, although actual documented occurrences are quite rare.

In any case, if a large bird is going to take your small pet, a great-horned owl is probably the most likely culprit.

Bald eagles are an incredible conservation success story, and these beautiful birds are now common in many parts of the continent. As eagle populations grow, so does folklore about them. In many places, bald eagles eat primarily fish. But they are adaptable, too. In Iowa, I often see them feeding on carrion like dead pigs disposed by confined farms and gut piles left by deer hunters. An eagle is a powerful bird, though, so could it take a dog or cat?

You can find a lot of information on eagle strength. Anecdotally, many established wildlife biologists and field naturalists have witnessed bald eagles lifting heavy prey. But, in most instances, even bald eagles struggle to lift heavy prey for very far.

The Alaska Department of Fish and Game published an excellent story exploring this topic in depth. Alaska has the largest population of bald eagles, and the biologists quoted in the story note that these birds are capable of nabbing a pet, but unlikely to do so.

As biologist Ron Clarke explains in the story:

“On a wide-open beach, I have no doubt that an eagle with a full head of steam could pick up a six- or eight-pound dog and just keep on going. If it landed to kill a ten-pounder, and then tried to pick up and fly from a dead stop, could it get off the ground? Probably not…They can pick up and carry four or five pounds, maximum, and actually fly off with it. They can lift a little more and hop it along, but they can’t carry it off.”

The story also notes that bald eagles are very wary of human activity. As such, they probably aren’t going to be hunting for a puppy snack in your backyard.

Golden eagles are even more legendary in their toughness. These eagles have been trained by falconers in Europe and Mongolia to hunt wolves and roe deer. There are stunning videos of them knocking ibexes off cliffs.

A golden eagle certainly has the strength to catch your dog, but these birds simply are not backyard birds. If you do see a golden eagle around, though, it’s best to keep your beloved pet indoors.

Losing your pet to a raptor is extremely unlikely. But I understand the concern. Even if the odds are minuscule, the thought of one’s friendly pug or poodle being dismembered by a red-tailed hawk may be too much to bear.

Fortunately, the solution to this is quite simple: don’t let your pet roam freely.

There are many good reasons for following this advice, and have nothing to do with birds of prey. It is dangerous world out there, with roads, poisons, urban coyotes, other dogs and cats and many other perils. Native predators are often blamed for pet disappearances despite a frequent lack of evidence. The fact is, if your cat went missing, it is more likely it got run over by a car than nabbed by a hawk. 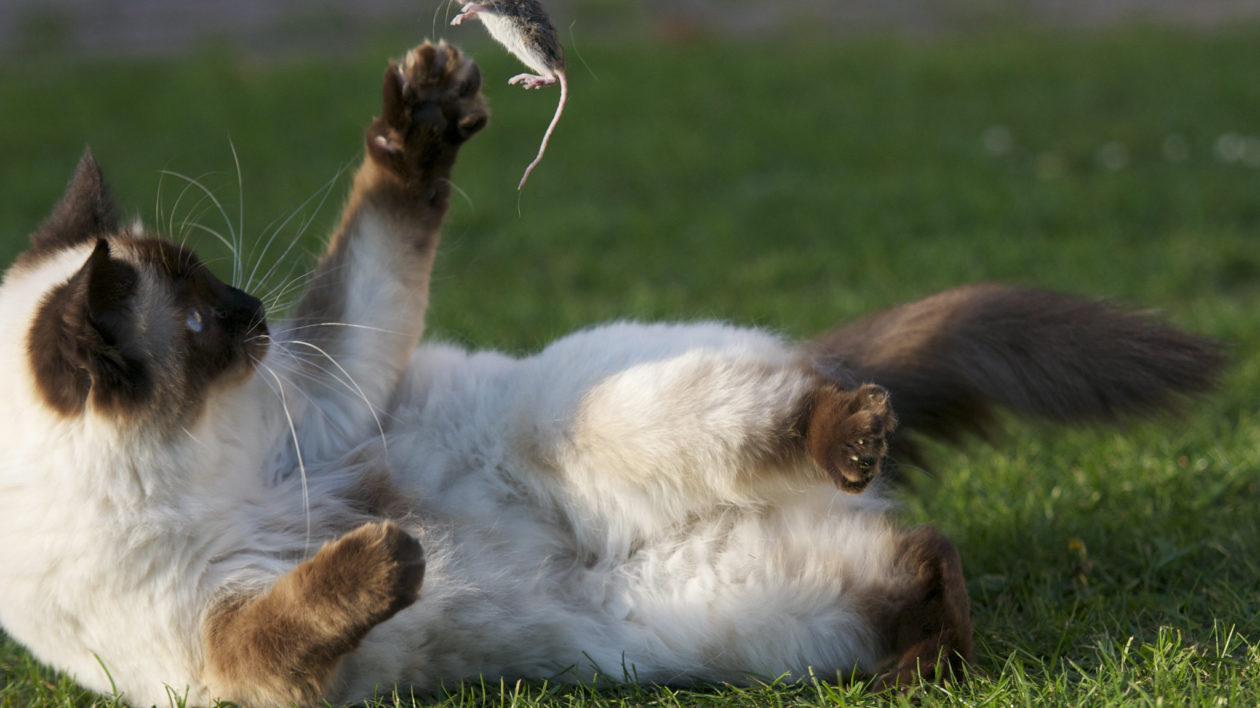 And then there is this inconvenient truth: Wild animals have far more reason to fear your pets than pets have to fear wild animals.

The American Bird Conservatory states that free-roaming cats are the biggest threat to birds in North America. Researchers estimate that these cats kill a staggering 2.4 billion birds a year. Keep your cat inside.

If you do enough searching, you can find instances where a hawk nabbed a cat or a Chihuahua. These dramatic stories may nab the headlines, but they are exceedingly rare occurrences. A pet cat killing songbirds happens every single day.

If you follow social media, you’d get the idea that sharing space with wildlife neighbors is very challenging. However, living with backyard wildlife is quite easy, especially if we learn some basic natural history. As is so often the case, the real problem is not them. It’s us…and our pets.

Where Did Pigeons Come From?

To Protect Nature, Cities Matter in the Urban Century

Why Do Flickers Knock on Your House?

Should You Provide Water for Birds in Winter?