As a Nature Conservancy forester in Pennsylvania, Mike Eckley spends a lot of time assessing the health of woodlands. That means he spends as much time thinking about white-tailed deer as he does trees.

Many conservation biologists consider over-abundant deer to be an even bigger threat to eastern forests than climate change. Deer can fundamentally change the forest ecosystem, threatening everything from rare wildflowers to migratory songbirds. These deer also can cause deadly vehicle collisions, increase risk of Lyme disease, and cause significant agricultural and property damage.

Eckley educates hunting clubs and landowners on deer management issues, and recently co-edited a book on the topic. He also works to make sure the deer herd is healthy on Conservancy projects like the West Branch Forest Preserve, a 3,000-acre preserve in northcentral Pennsylvania.

Beginning in 2008, Eckley set out trail cameras to monitor white-tailed deer, including their health and buck to doe ratios.

As with any camera trapping, he captured images of many other interesting creatures that roam the “Pennsylvania Wilds.”

And yes, there were plenty of white-tailed deer. The cameras provide a glimpse of deer behavior. In this photo, two deer are “boxing” with each other. As with many creatures, deer will spar over food and to establish their dominance.

A healthy white-tailed deer herd has a low buck: doe ratio. Decades of deer management in Pennsylvania emphasized a heavy buck harvest coupled with conservative doe hunting. Many bucks were killed at very young ages, and the number of does proliferated.

Pennsylvania now has antler restrictions of bucks, allowing the males a higher chance to reach maturity. For many of us who grew up hunting deer in the state (including me), seeing bucks this size was once a notable event, but it’s becoming more common thanks to better management. 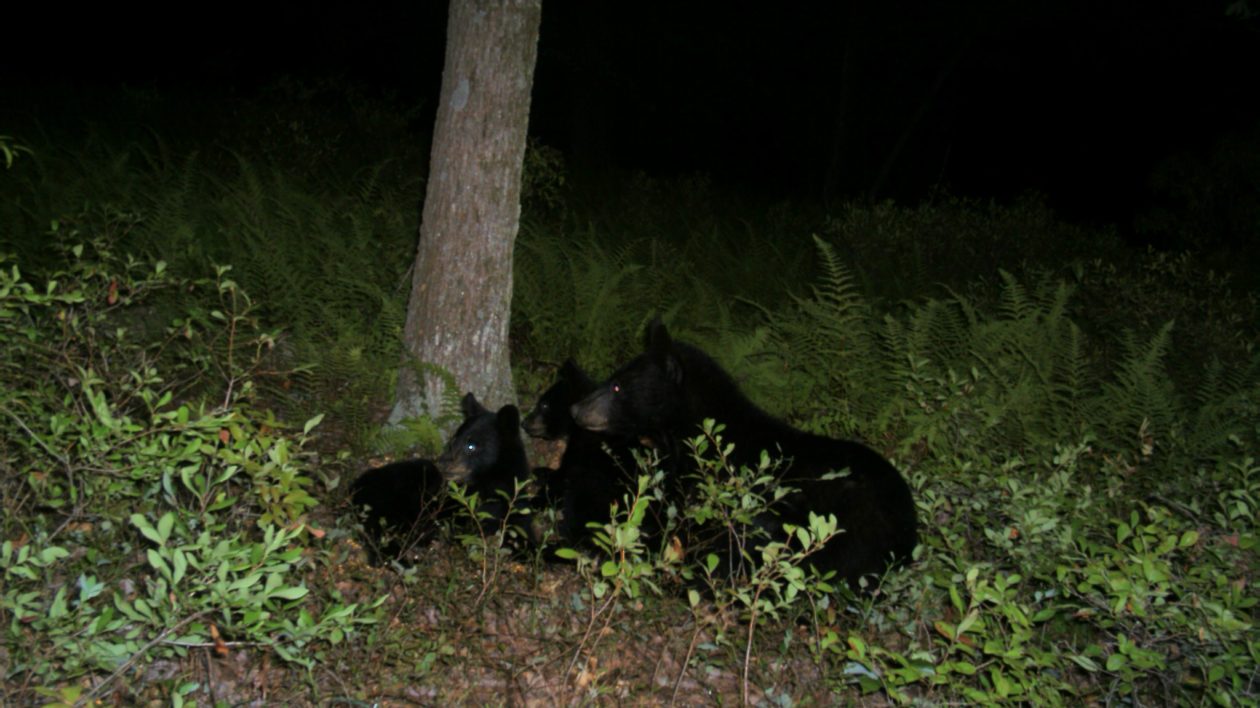 Here, cubs tussle over a stillborn fawn that was found on the preserve. Bears are omnivorous and do feed heavily on fawns in the spring.

Many people associate “pack rats” with the arid Western United States, but the Allegheny woodrat (another name for a pack rat) lives in Pennsylvania. These secretive creatures are not common in most of the state, but they are thriving on the preserve.

Camera traps helped researchers census the woodrat population without using more invasive methods like trapping. Woodrats live in rocky areas of the preserve, and trail cameras provide another glimpse of their presence. The census provided information so that the Pennsylvania Game Commission allocated conservation funds to perform habitat enhancements within the preserve for the benefit of woodrats.

The fisher, a large member of the weasel family, was reintroduced to Pennsylvania in the 1990s. At the time, some pundits claimed that fishers needed larger wilderness than the Keystone State offers. That proved not to be the case; fishers thrived and now can be found in most of the forested areas of the state.

While fishers live on the West Branch Forest Preserve, Eckley has not captured any image of them. This image was taken at another Conservancy project in northcentral Pennsylvania.

For many years, the gray fox was the most common wild canid that outdoor enthusiasts would encounter in eastern woodlands. They remain relatively common but secretive.

Over the past few decades, however, coyotes have become increasingly common. These coyotes actually are part eastern wolf (a species similar to the red wolf). The eastern coyote is larger and at times has a distinctly wolf-like appearance – as this one demonstrates.

There are a lot of mountain lion sightings in Pennsylvania, many of them by “barstool biologists.” No doubt an increasing number of bobcats contributes to the rumors.

In the early 1900s, much of Pennsylvania was cleared of its forests. Those forests have regenerated, benefiting many of the creatures you see in this blog, including bobcats.

“It’s amazing how sensitive these cameras have become,” Eckley says. “They even pick up birds flying by.”

Like this flicker. Just in the past 10 years, trail cameras have gotten less expensive, with longer battery life and higher image quality.

To photograph the elusive predators found on the preserve, Eckley often digs a small hole and places an unusual scent or bait in it, like the gland of a beaver. This is a trick used by fur trappers and now has been modified by camera trapping enthusiasts.

“Many creatures will investigate just out of curiosity,” Eckley says.

Finally, not all trail camera captures are welcome. “Monitoring illegal activities on the preserve early on became a use for these cameras,” Eckley says.

One of the most common unlawful activities is unauthorized ATV use. By documenting the trespassing, Conservancy staff can better block illegal access routes and protect the forest.