A Not-So-Simple Cabin in the Woods

Ever since Henry David Thoreau went to the woods to live deliberately, the cabin has loomed large in nature and outdoor literature. Countless would-be philosophers have journeyed to their little places in the forest, and returned to write about it – with varying degrees of success.

The ideal of the cabin – of a place to escape from a fast-paced modern life – still appeals to many of us. There is still the idea that staying in a cabin allows us to “front only the essential facts of life,” as Thoreau put it. We imagine ourselves staring at warblers, sitting around the campfire, far away from a world gone mad.

From the Nature Bookshelf

However, there are two essential facts of life confronting any cabin owner, facts often concealed in nature literature. The first is that a cabin is a building in the woods, and as with any building, requires considerable maintenance to keep it functioning and livable.

It becomes very easy for the simple task of cabin cleaning to become all consuming. Soon, you spend your cabin days repairing the roof rather than fishing. Instead of  deep contemplation of nature, you devote all your energy to keeping nature out of the cabin.

Our Little House on the Prairie

I recall a year my wife and I spent renting a little house on the prairie. I could tell you about the bobcat in the front yard, the blooming wildflowers in the spring, the epic battles between large white-tailed bucks. That would all be true. But my most vivid memories involve endless numbers of mice. Mice waking us from sleep, mice crapping on the kitchen counter.

The second reality is that going to a cabin does not allow you to escape the problems of the 21st century. Not really. Not if you have your eyes open. Look outside that pretty window and you will soon notice invasive weeds, forest pests and degraded stream.

And this is why Stephen Sautner’s new book, A Cast in the Woods, is, well, a breath of fresh air. His account of cabin ownership is blessedly void of the navel gazing apparent in much of the genre. Instead, it thoughtfully connects conservation, outdoor sport and the pleasures and perils of cabin life. And it does so with an entertaining and frequently humorous style.

Sautner, communications director for the Wildlife Conservation Society, bought a cabin in the New York’s Catskills region because he wanted a place to fish. Stuck in traffic, he found himself dreaming of a retreat where he could cast to wild trout with a warm campfire and cold drink waiting at the end of the day.

And he found that with his Catskills cabin, but ultimately cabin living proved a bit less simple than he perhaps imagined. This book is at its funniest when Sautner details some of the perils and pains of cabin ownership, from annual cleaning to outhouse installation. With a lesser writer – or a less passionate angler – these tasks could become tedious and all consuming.

But Sautner’s refrain throughout the book – something the previous cabin owner told him – was “It’s just a cabin.” He embraced the tasks, even the unpleasant ones, but never lost sight of the fact that he bought the place for fishing and birding.

There are Always Mice

And I found myself nodding (and laughing) in recognition as Sautner dealt with a rodent invasion. In everything he did, he tried to coexist peacefully with the local wildlife. And he understood those who wished to extend that spirit of coexistence even with rodents. But, as he writes, “Get back to me after a mouse sh—- on your wife’s pillow.” 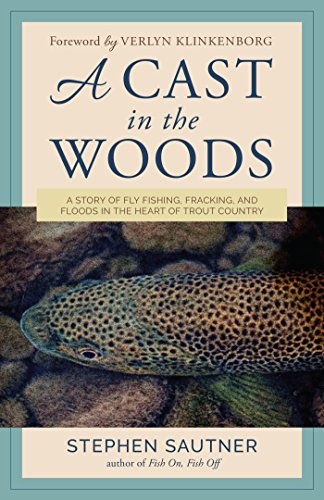 There are bigger challenges, of course, than mice and outhouses. Sautner quickly finds himself embroiled in conservation issues small and large. Not long after he moves, he finds energy companies scouting his property and the surrounding area for potential fracking sites. He becomes an advocate, a role complicated by the differing views his neighbors hold on energy development.

And then a “700-year-flood” scours the precious trout stream that runs through his property, wiping out streamside vegetation and enabling invasive plants to sprout in their place. Sautner embarks on a project to restore the stream and habitat on his property.

While it may not have been why he purchased the cabin, restoration offers its own rewards. Caring and advocating for your own land, your own neighborhood, is ultimately the most important work in conservation. Sautner is never gloomy, instead approaching this work with enthusiasm and hard work – knowing that the reward will be seen in the birds. And the fish.

This is more than a fishing book, but I’d be remiss if I didn’t note that Sautner is perhaps the best writer on this sport today. I don’t make this claim lightly; my collection of hunting and fishing books long ago passed from being a passion to sheer lunacy. Sautner gets it. He gets why we fish, the beauty of running water and native fish, the joy of the pursuit. And, blessedly, his writing is free of the gear marketing that plagues so much fishing prose.

Sautner is serious about fishing without taking himself too seriously. This, in itself, is a rare treat in outdoor writing. His collection of fishing stories, Fish On, Fish Off, is one of the very few outdoor books that has ever made me laugh out loud. The writing in A Cast in the Woods on fish and fishing is every bit as good. Perhaps because he’s not a fishing gear marketer, I don’t often see his name promoted as heavily as certain fishing scribes. But if you cast to trout (or, really, anything), do yourself a favor and check out his books. You won’t be disappointed.

Sautner also writes well of birds and natural history, of the pleasures of sharing time outdoors with family and friends, of joys like taking walks with neighbors.

There’s a wealth of great writing in this relatively slim volume. Ultimately it’s not easy to characterize. It’s nature writing, it’s outdoor writing, it’s environmental writing. And, somehow, A Cast in the Woods, succeeds at all three.

It’s a great cabin tale for the 21st century, a thoughtful tale that’s never dreary, and a story that shows that, warts and all, time in the woods is ultimately one of life’s great joys.