A Bull Fight for Conservation

Clearly agitated, the bull bellows again, then begins urinating, spraying himself frenetically. He rolls in a patch of bare earth, finally rising—covered in an aromatic blend of excrement and prairie dust.

He looks around for challengers. None seem ready to take him on—this time. For the past several weeks, though, the prairie has been alive with bison bulls bluffing, sparring and head-butting their way to be the dominant male.

All that battling is tough, exhausting work for a bison bull. But new research being conducted at The Nature Conservancy’s Samuel H. Ordway Prairie Preserve suggests this fighting – and lots of it – is key to maintaining the genetic health of bison.

Jon Grinnell, professor of biology at Gustavus Adolphus College, has been leading student research on bison at the Ordway Prairie for six years. The effort started as animal behavior research on rutting bulls, but the scientists found that bull competition could even help ensure the long-term survival of the species.

Wait: Haven’t bison already been rescued from the brink of extinction? Do we really need to worry about them as a species?

After all, the story of the bison’s near-demise and then subsequent recovery is well known in conservation circles. From a low of less than a thousand animals, they’ve rebounded to a population of more than 500,000.

The catch: Most of those bison lived on fenced preserves and ranches, with herds numbering fewer than 400 animals. Since one bison bull can breed with lots of cows, herd managers have often stocked as few bulls as possible. But that limited genetic pool is the species equivalent of placing all your money in one high-risk investment opportunity. It can lead to what biologists call genetic drift, the loss of important traits in the population over time.

A genetically diverse population is the well-rounded portfolio: it can better weather the bad times and is less likely to lose valuable assets necessary for future survival.

“Bison ranching is based on a production model,” says Mary Miller, conservation manager at Ordway Prairie. “As conservationists, we can’t just look at the number of animals produced. We have to consider the number of breeding individuals in each gender and age class, and how those animals are selected. This all impacts behavior and genetics of the herd. We are trying to figure out how to best manage small herds of bison in a way that retains valuable genetic traits.”

But what does that have to do with battling bulls?

By human standards, bull bison are cantankerous, ill-tempered beasts. They run through fences, charge people or vehicles and cause headaches for ranch managers. As such, managers often itnentionally or unintentionally select for docility when managing a herd.

Docile herds of bison, with just a few bulls, might begin to behave an awful lot like domestic cattle. Conservationists are concerned that selecting for specific characteristics might select against other valuable traits: the ability to adapt to a changing climate, survive a harsh winter, calve on their own or protect themselves from predators.

But is it possible to have genetically diverse bison that behave like wild animals on small, fenced preserves?

I’m sitting in the back of a pick-up with two Gustavus Adolphus University students, intently observing bull bison fight, bellow, wallow and taste cow urine – all part of their annual mating ritual.

At the 7,800-acre Ordway Prairie, the researchers have documented a pattern to the annual fights for dominance.

Early in the season, a variety of bulls compete for cows that come into heat. Fighting can be intense. Dominant bulls at this time breed most of the cows. Exhausted from fighting, they eventually leave the herd to rest, heal their battle wounds and replenish the fat stores they need to get through the coming winter.

When the second wave of cows comes into heat, new dominant bulls will emerge and breed the cows. Late in the season, lower-ranking bulls are competing for the few remaining available cows.

The researchers at Ordway Prairie have found that mature bulls, ages six and older, tend to dominate breeding. In some years, as few as four bulls successfully bred the majority of cows. Limiting mature bulls in the herd, the common practice on bison ranches, could limit the genetic diversity of the herd.

The emerging research finding thus comes simply to this: More mature bulls in the herd means more bulls passing on their genes.

But that does shift from the usual model of stocking as few mature bulls as possible.

Grinnell also suggests that managers should introduce bulls as a group and allow them to reach maturity. This way, there are groups of bulls in the same age class, increasing competition and the number of bulls that successfully breed.

More study will be needed, but preliminary results on paternity of bison calves support these recommendations.

“It may be more complicated than just having more bulls,” says conservation manager Mary Miller. “We are trying to find out how and when it’s best to introduce and remove animals from the herd. In the wild, a bull might breed with a cow herd, and then wander off and never encounter them again. Here on the preserve, year after year, a bull will repeatedly encounter the same cows. If left in the herd, he may even encounter his own offspring.”

Conservancy preserves offer the perfect outdoor laboratory to test this idea, and to try other experiments in bison management. More than 5000 bison roam on 12 Conservancy preserves (located in seven states, Canada and Mexico), collectively constituting one of the largest “conservation herds” in the country.

“We could start looking at the Conservancy’s bison as one large but separated population,” says Miller. “One possibility would be to move bison bulls around to help preserve the genetic integrity of the species. But it’s a balancing act. We don’t want to haphazardly ship bison around the countryside. We need to do it in a way that’s beneficial to bison conservation. This and other research is giving us the information we need to make educated decisions.” 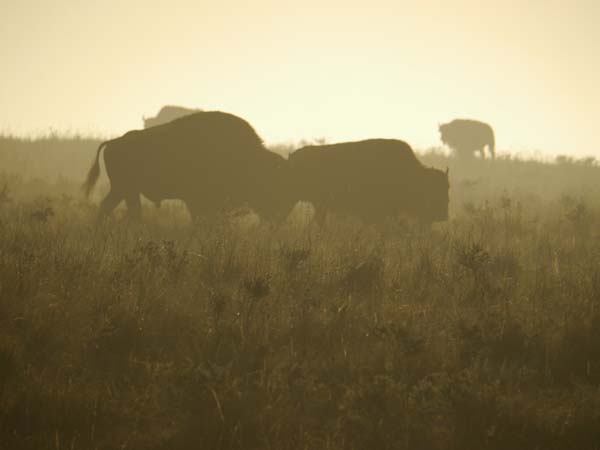