How the Fallow Deer Took Over the World

I spotted movement in the brush as my eyes picked up the forms of three large mammals. I focused intently. I was in South Africa, and you never know what interesting creature might appear. I live for moments like this.

Then the animals stepped into a clearing. I saw hoofed mammals with spots and large, palmated antlers. Wait. Antlers?

Southern Africa is home to a long list of hoofed mammals. But members of the deer family – the only mammals with antlers that are shed each year – are not native here. And still. Here, indisputably, were deer. Fallow deer.

I should not have been surprised. After all, humans have been moving fallow deer around for at least 8,000 years. Fallow deer are now found roaming free on every continent except Antarctica.

They have been moved in so many ways, for so many reasons, that the real story can be difficult to decipher. Recent research provides some answers but much about the fallow deer’s spread remains unknown.

To someone from North America, the first impression of a typical European fallow deer (Dama dama) if of an adult deer that looks like a fawn. That’s because many fallow deer are covered in spots at all stages of life. However, their coloration is highly variable. Fallow deer can be white, black, dark brown and a variation of these colors.

The other thing you notice is the palmated antlers of the males, like a moose crossed with a whitetail.

This is the point in a nature story where I am supposed to tell you about the fallow deer’s natural history, its native range and habits. The fallow deer is a common large mammal, so this should be easy. But it’s not, because the fallow deer is an animal shaped by humanity and humanity’s ever-shifting movements, politics and priorities.

In fact, some experts believe the only current native, wild population of fallow deer is now found in an isolated herd in Turkey. This would make native fallow deer an extremely endangered mammal.

And yet, fallow deer also now roam in large herds in England and in many parts of continental Europe. You can find them in Australia and Argentina and Fiji and Madagascar and many other places. How did the fallow deer go from a range-restricted species to one of the most widespread large mammals on the planet?

I own a large collection of deer books, and many tell of the fallow deer’s spread across Europe. But I noticed that many repeat similar stories, even though it’s difficult to track down primary sources. In fact, much about the fallow deer’s history is based on folkore passed down and recycled.

A recent research effort, The Fallow Deer Project, began to look at the actual evidence (including archaeology, deer genetics and other information) to trace the human history of the fallow deer. Because the fallow deer’s spread is a human history. The animal’s presence in Europe and beyond is due to deliberate movement by people which began 8,000 to 9,000 years ago.

While info on early introductions is sparse, we know Romans transported deer across Europe and to the British Isles. But these animals disappeared soon after the Roman Empire ended. A thousand years later, fallow deer were again introduced to Britain, this time by the Normans.

It’s often suggested that the Norman army brought the deer, but that might not have been the case.

As researcher Naomi Sykes, of the University of Nottingham, said in an article for the UK Arts and Humanities Research Council: “Rather than an invading army it could actually just be one person, one anonymous person who went traveling, saw some beautiful deer and decided to transport some back as a gift. It could be as straightforward as that.”

Whatever the reason, fallow deer would become important animals in medieval Britain.  Royalty kept them in large herds on enclosed estates – often called deer parks – for viewing and hunting. Venison made up a significant portion of the diet. Formalized hunts were hugely popular cultural events among the elite. Evidence published by The Fallow Deer Project suggests the deer were carefully nurtured; in fact, many animals reached very old ages.

Notably, these deer were off-limits to people outside the estates, with significant penalties (sometimes including death) for anyone caught “poaching.”

The formalized hunts of the deer park fell out of favor, of course. But today, fallow deer are still very common in the English countryside and many other parts of Europe. You will often see herds on English manors, but they also roam freely in several forest areas. The deer park model also helps understand the fallow deer’s spread around the globe.

Fallow deer are now established in many places – like Australia, New Zealand, Fiji and several Caribbean islands – due to British colonialism. Often, the pat answer for why the colonizers introduced deer is to provide meat to local populations, as well as so that the colonizers would have game to hunt.

This may be part of the reason. But, as several recent (and more academically rigorous) sources have pointed out, there were easier ways to raise meat animals than dealing with the high cost and uncertainties associated with shipping animals thousands of miles across rough seas.

Given the animal’s affiliation with royal estates, its presence carried heavy symbolic (and imperialistic) value. It was a deer that, even in England, was off limits to the locals. The presence of deer indicated the presence of power.

An article in the journal Environmental Archaeology does an excellent job of unpacking the fallow deer’s introduction to the Caribbean island of Barbuda. The article notes that the deer’s stocking was clearly a sign of power and privilege by the British imperialists.

The deer were introduced to a British “estate” in the 1700s, and the animals prospered. Charles Darwin collected feral fallow deer on Barbuda in the 1800s. But the deer were not allowed to be pursued by the enslaved Africans who lived on the island, despite the fact that one of the often-reported reasons for the deer’s introduction was as a meat source.

However, the article also notes how perceptions of the deer changed over time. While the deer was at one point a “symbol of empire,” it became entwined in local culture. Despite prohibitions, enslaved people did hunt the deer, and this became an important way to defy colonizers and show independence. Today, the fallow deer is the national animal of Barbuda and Antigua, and deer hunting remains an important cultural activity on the island. 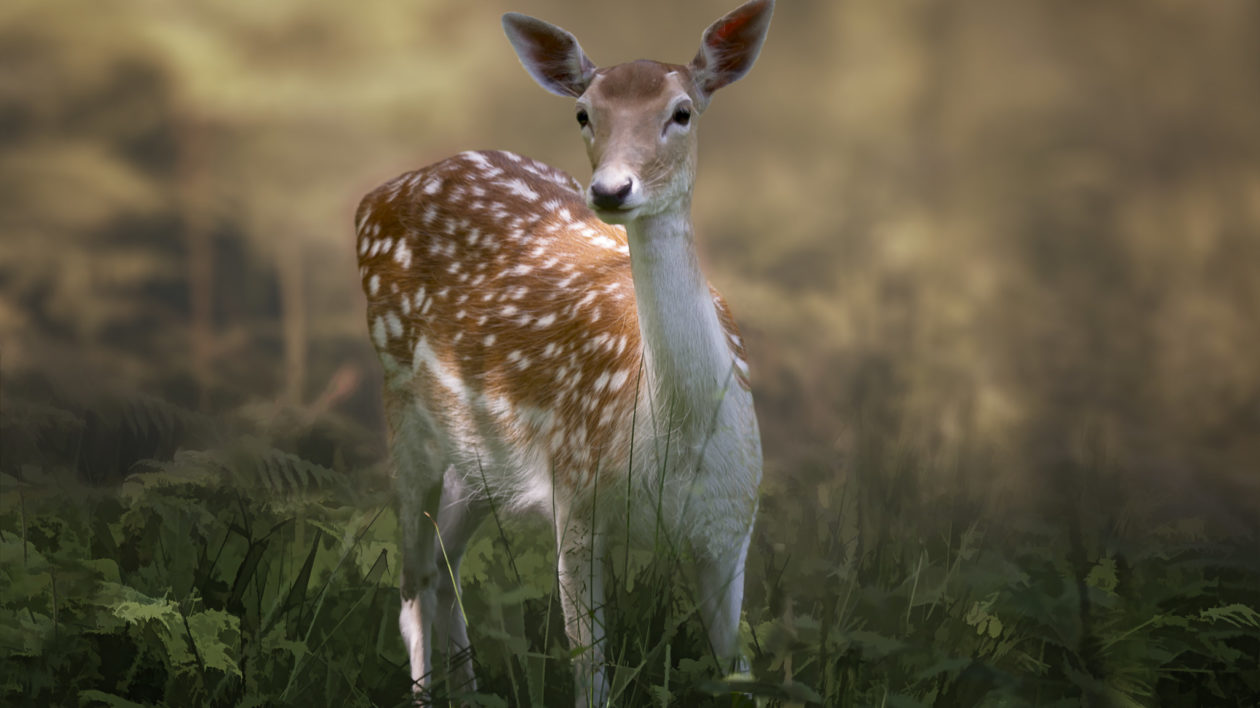 Fallow Deer in the United States

Fallow deer are a more recent introduction to the United States. Like so much associated with this species, tracing introductions and even current populations can be difficult.

My own introduction to the fallow deer came as a kid, when we visited what could euphemistically be called “animal attractions”: those roadside zoos and collections that featured various exotic animals. Fallow deer were a mainstay, in part because they were quite docile and bred readily in captivity.

As an aside, this in itself is an interesting question of fallow deer history: were the fallow deer selected because they were more docile than other deer species? Perhaps. But whatever the case, centuries of breeding for enclosed deer parks undoubtedly made them more tolerant of humans.

So fallow deer are frequently featured in petting zoos and private animal collections. Even as a kid, I noted these establishments often were, well, less than reputable. This includes poor shelters and bad fences. Occasionally a few fallow deer escaped. Some of these escapees bred and formed feral herds.

My deer books are filled with references to herds in states like Nebraska, Colorado and Maryland. But these populations seem to come and go. There are still fallow deer in the United States, with herds in the Land Between the Lakes in Kentucky and on a Georgia barrier island. There’s a population in Alabama that formed from escaped animals; it once numbered in the hundreds. Today there are an estimated 40 animals, and they are decreasing.

Perhaps the best-known example, from a conservation perspective, is the herd at Point Reyes National Seashore in California. Fallow deer were stocked there and their population grew, as they overgrazed the habitat and spread disease to native black-tailed deer and Tule elk.

The National Park Service, despite an outcry from animal rights activists, began a program to eliminate these invasive deer. They began with a culling program and transitioned to contraceptives once the herd was reduced.

Today, a small herd of old female fallow deer still can be found on Point Reyes, left to live out their days. When they die, the park will be free of invasive deer.

And then there’s Texas. There, the fallow deer was introduced for today’s answer to the deer park – the “hunting ranch.” A variety of exotic animals are stocked on Texas ranches, from addax to zebras, for wealthy trophy hunters to shoot. Fallow deer are often on the hunting menu. They have spent centuries living on the semi-wild hunting estates of Europe, so they are well suited to today’s high-fenced ranch. Wherever hunting ranches are common – like Argentina and South Africa – you’ll find fallow deer.

Good fences may make good neighbors, but sooner or later they’re bad at keep wild animals enclosed. So where there are hunting ranches, there are also free-ranging populations of fallow deer.

Still, there seems to be a limit to the fallow deer’s spread. They aren’t like some other invasive mammals. Give a feral hog an inch – or a hole in a fence – and it will overtake the region. Fallow deer live on the edge of the wild and domestic. Left to their own devices, many populations simply disappear.

The Deer in Africa

The three fallow deer I saw in South Africa were on Robben Island, the notorious prison that was used during the apartheid era to house political prisoners, including Nelson Mandela. I’m not going too far out on a limb to suggest that stocking European animals on an island then dedicated to upholding white, European supremacy can be a coincidence.

Robben Island’s fallow deer were stocked in 1963, the same year Mandela began his prison sentence there.

Today, Robben Island is a living museum, with tours conducted by former political prisoners. Our guide told of his own torture and the endless hours of hard labor on the island. He also told of evenings spent with the other exhausted prisoners, as they discussed and debated what a free South Africa would look like. In that horrific environment, ideas of reconciliation and forgiveness were hashed.

The deer are still there. Whatever the purpose of the original introduction, they are now part of the island’s fauna. They have to be periodically culled as they are prone to overgrazing the native habitat. But, constantly, the relationship between fallow deer and people is being renegotiated. Perhaps they are a fitting animal to live in a place with an ugly history that is now a symbol of hope.

The Once and Future Fallow Deer

There is still so much we don’t know about this animal, but archaeology, genetics and other academic fields can help us understand it better. In so doing, we can perhaps better learn our own history and surprising connections to wild animals.

One thing is certain: our relationship with this deer will continually shift. In some places, the deer will be protected for its historic or cultural value. Other populations will be considered invasive. Some populations will disappear and new ones will be established. Always, it will be a large mammal that is no longer fully wild but that was never fully tame. A perfect animal, as it were, for the Anthropocene.

Black Deer: Have You Seen This Rare Color of a Common Animal?

Real Reindeer Are More Amazing Than You Ever Imagined

A Breakthrough for Chronic Wasting Disease?