I really wanted to title this blog, “Sea-Going Scorpions on the Half-Shell,” because the first time I ever saw the underside of a horseshoe crab I thought it looked like nothing so much as a gigantic scorpion lurking beneath half of a plain brown shell. But sadly for me, while that title is certainly catchy, it’s not exactly accurate.

For one thing, while they are related, horseshoe crabs aren’t scorpions. Of course, they aren’t exactly crabs either. It’s complicated. And that’s just their natural history. Wait until you hear about their modern issues, which essentially boil down to this question: can an animal that has survived largely unchanged for 450 million years continue its remarkable record of longevity in a world dominated by humans?

The answer might be clearer if the crab’s meat weren’t so delicious to conch and eels, its eggs so necessary for migratory shorebirds, and its blood considered so important for human health. But it’s exactly these economic, environmental and social dependencies along with climate change and habitat loss, that make the horseshoe crab’s future simultaneously so vital and so potentially uncertain.

Right now, the demands on horseshoe crabs stand out in especially sharp relief as the world searches frantically for a cure for COVID-19. More than 30 different companies are expected to use horseshoe crab blood for testing during vaccine development.

“It’s a challenge and it’s not just an issue for the crabs,” says Barbara Brummer, The Nature Conservancy’s New Jersey state director. “But also for all of the species and industries that currently depend on horseshoe crabs for survival.”

A New Jersey native, Dr. Brummer has been at the epicenter of horseshoe crab conservation in the Delaware Bay for more than 16 years. I recently caught up with her for a quick conversation about her hopes and concerns for this remarkable animal, and its role in the health and survival of so many other species, including our own. 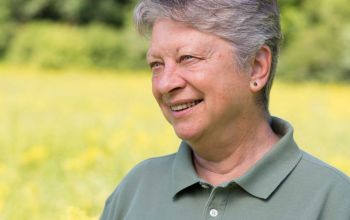 As State Director of The Nature Conservancy in New Jersey, Barbara Brummer heads a team of scientists, conservation practitioners, policy experts and fundraisers addressing the key challenges facing nature and people in the nation’s most densely populated state. As the world moves rapidly towards a population of 9 billion people, she has focused the Chapter on demonstrating the critical role that nature plays in the health of both people and nature – through the forested lands and great rivers that provide freshwater, marshes that protect the state’s extraordinary coast and support a bounty of  marine life, and natural expanses that help mitigate the impacts of climate change.

Q: So. Horseshoe crabs. I was terrified of them as a child walking the beaches of the Narragansett Bay in Rhode Island, but it turns out that, though they look fierce and scary beneath their shells, they’re harmless?

Completely harmless, unless you’re algae, or a clam or worm or something small that they eat. They don’t have jaws or teeth so can’t bite you. They crush their food with their legs, and like birds, have a gizzard for grinding food before it hits their stomachs. Their tails do look sharp, but they’re for flipping themselves back over if they get upended by a wave, or turned on their backs by the crowds of other horseshoes during mating. Flipped over horseshoe crabs don’t last long on a beach once the birds spot them.

They live most of their lives offshore, out of sight, but come up on beaches [in the U.S.] every year to breed on sandy beaches. In the Delaware Bay especially, where spawning takes place every May and June, you can’t talk about horseshoe crab breeding – and it is a spectacle – without also talking about the migratory shorebirds, like red knots and ruddy turnstones that depend on the eggs laid by the millions every year.

Q: They also have a fascinating natural history beginning with the fact that, despite their name, horseshoe crabs aren’t exactly crabs. What are they?

They are arthropods, part of the group that includes crustaceans, arachnids and insects [the three major classes of arthropods], but horseshoe crabs aren’t crustaceans. They’re actually in a class by themselves. Literally. It’s called Merostomata, which means, also literally, “legs attached to the mouth.” It’s an inelegant, but accurate description.

They’re amazingly hardy animals. According to the fossil record, they’ve survived – with very little change — all of Earth’s five great extinction events, including the Permian extinction. That’s the one that scientists believe killed as much as 95 percent of all marine species. They’re all gone. Horseshoe crabs – in their modern form – are still here.

Q: Before this terrible pandemic, I’m not sure many people knew just how dependent human health – through the pharmaceutical industry – is on the blood of one primitive creature. What’s so special about horseshoe crabs?

So many things. When it comes to pharma, it’s all about horseshoe crab blood. One of the reasons these animals have survived – again, largely unchanged according to the fossil record – is because their blood has some amazing properties that protect them from infection. Their blood is copper-based, not iron-based like ours. That’s what gives it that unusual blue color, but the thing that matters most for people in terms of human health is that inside every horseshoe crab blood cell (called an amebocyte) are proteins that are highly sensitive to Gram negative bacteria.

The short version is: horseshoe crab blood is used to create a test (called the Limulus Amebocyte Lysate or LAL test) that pharmaceutical companies use to test the sterility of their products. I just think it’s amazing that every pharmaceutical company in the world relies on this primitive creature. That means every person who has ever had a medical implant or an injectable drug owes these crabs a debt. [There’s also a similar quality test made from the blood of Asian horseshoe crabs called TAL, for Tachypleus Amebocyte Lysate.]

Each year about 500,000 American horseshoe crabs are collected, bled in a laboratory for medical use to create LAL tests, and then released back to the water. You’ve probably seen the pictures. Most of those crabs come directly from the Delaware Bay. 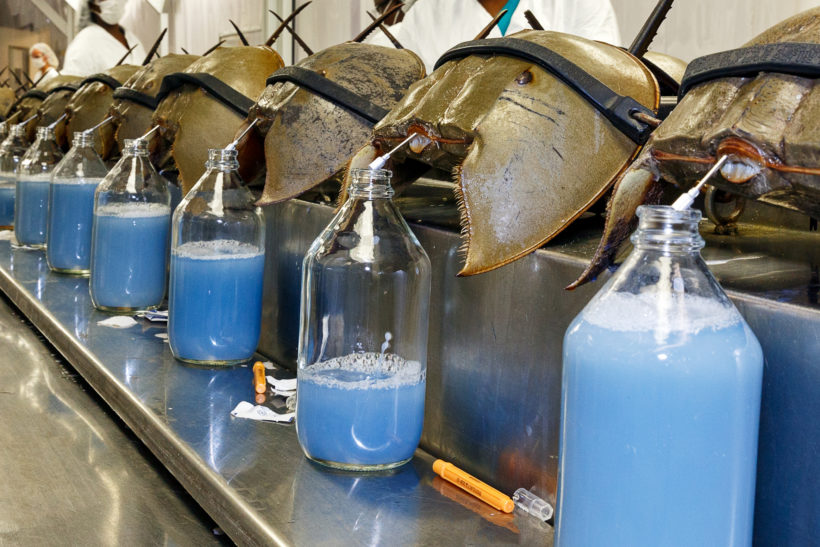 Horseshoe crabs being bled in a lab. (Their blood is blue, but the liquid in the bottles is not just blood. It also includes a surfactant to prevent coagulation.) © Photography by Ariane Mueller

Q: I have seen those pictures. I always think they should be captioned “Alien Abduction: Horseshoe Crabs.”

It is a startling image. The good news is, the majority of the crabs (about 85 percent) do survive the bleeding process for the LAL test – which takes about 30 percent of each animal’s blood. They live to be released back into the ocean. The bad news is, we don’t exactly know what happens to them after that. How long do they survive once they’re released? There is some evidence that the crabs are disoriented and lethargic after release. Some may not breed again.

Fortunately, there is an alternative that may alleviate pressure, at least on the American horseshoe crab. An alternative LAL test that was developed around 2016. It doesn’t require horseshoe blood. Instead, it relies (and this is something of an oversimplification) cloned DNA from one of the horseshoe crab clotting factors. This synthetic test has been approved by the FDA for use in the U.S., and by the FDA equivalent in Europe for use there, but still isn’t widely used because it’s going through some more regulatory hoops in the U.S. Hopefully it will be fully approved and adopted soon and take a little more pressure off the horseshoe crab population.

Q: This isn’t really a question, but it seems amazing that in 2020, a billion-dollar global industry is so dependent on such a primitive creature.

It’s true and there’s also the bait industry to consider – eels and conch seem to be very attracted to horseshoe crabs. Especially when they’re cut up and used as bait. So, the harvest of crabs for that use puts additional pressure on the horseshoe population, which is listed as vulnerable in the U.S. by the IUCN Red List, and at least one species in Asia is listed as endangered.

Q: Which brings us back to the Delaware Bay?

It does. In the Delaware Bay, migratory shore birds time their travels to arrive just as the horseshoe crabs start to emerge from the water to lay their eggs on full moon nights in May and June. The Bay is a prime – if not THE prime — refueling station for the rufa Red Knot, a legendary frequent flyer that migrates from the high artic to the tip of South American and back every year. [One Red Knot, ‘B95’, made the round trip so many times, he earned the nickname “moonbird,” having flown the distance to the moon and back in 16+ years of migration.]

The birds fatten up on the lipid-rich eggs for a couple of weeks before heading north to breeding grounds in the Arctic tundra. The survival of red knots, ruddy turnstones and a host of other shorebird species is inextricably tied to the abundance of horseshoe crab eggs in the Bay.

Q: What’s TNC’s stake in this?

Same as it always is. Doing everything we can to protect nature and preserve life. For horseshoe crabs in the Delaware Bay, they’ve been on our radar for a long, long time and we’ve focused on protecting and restoring coastal habitats that sustain spawning crabs. We conserved one of New Jersey’s major spawning beaches [Sunray] in 1997, and at Gandy’s Beach built an erosion-mitigating oyster reef that is, in part, building up shoreline for the crabs.

TNC has also been a contributor to the annual horseshoe crab census, the top volunteer event for us every year (sadly, cancelled due to COVID this year). Our data is combined with that of other organizations collecting information on 24 beaches in NJ and DE, and the results set the Delaware Bay horseshoe crab population estimate each year.

We also are a partner in Return the Favor which trains the general public to flip any horseshoe crabs they find struggling upside down to their upright position. This is positioned as a “favor” to give them a better chance at survival in exchange for all they give us for medical testing purposes.

Q: Are you hopeful for the future of horseshoe crabs?

I am. They’re obviously extremely hardy creatures with a knack for survival. But they’re facing a long list of challenges that are only exacerbated by climate change and habitat loss. We need horseshoe crabs and it seems anything we can do to relieve pressure on their population is worth the effort of change.

Note from Cara: For more information on the amazing horseshoe crab, how you and help, and how you can participate in a (hopefully COVID-free) horseshoe crab count next year, please visit nature.org/newjersey.