It sounds like a modern twist on an old cliché: if a tree dies in the city, does it matter? The short answer (of course) is, yes. And it’s a yes that only becomes more emphatic as science continually adds to the large and rapidly growing body of evidence documenting the wide range of benefits trees provide to urban dwellers, from people to wildlife.

The list is long and varied and includes streetscape beautification and improved aesthetics, opportunities for outdoor recreation, reduced stormwater runoff, and reduced air pollution, as well as summer heat mitigation.

So, if trees are such heroes of our urban landscapes, why do their numbers continue to fall in cities around the world? One reason for this apparent Urban Forest Paradox, says Conservancy economist Timm Kroeger, is that “maintaining urban trees is not cost free, and in times of tight municipal budgets, tree maintenance and replacement rarely take priority.”

And the key to solving such a paradox? Like all things that come down to understanding costs and benefits, it’s all about knowing how to calculate the ROI, or return on investment. 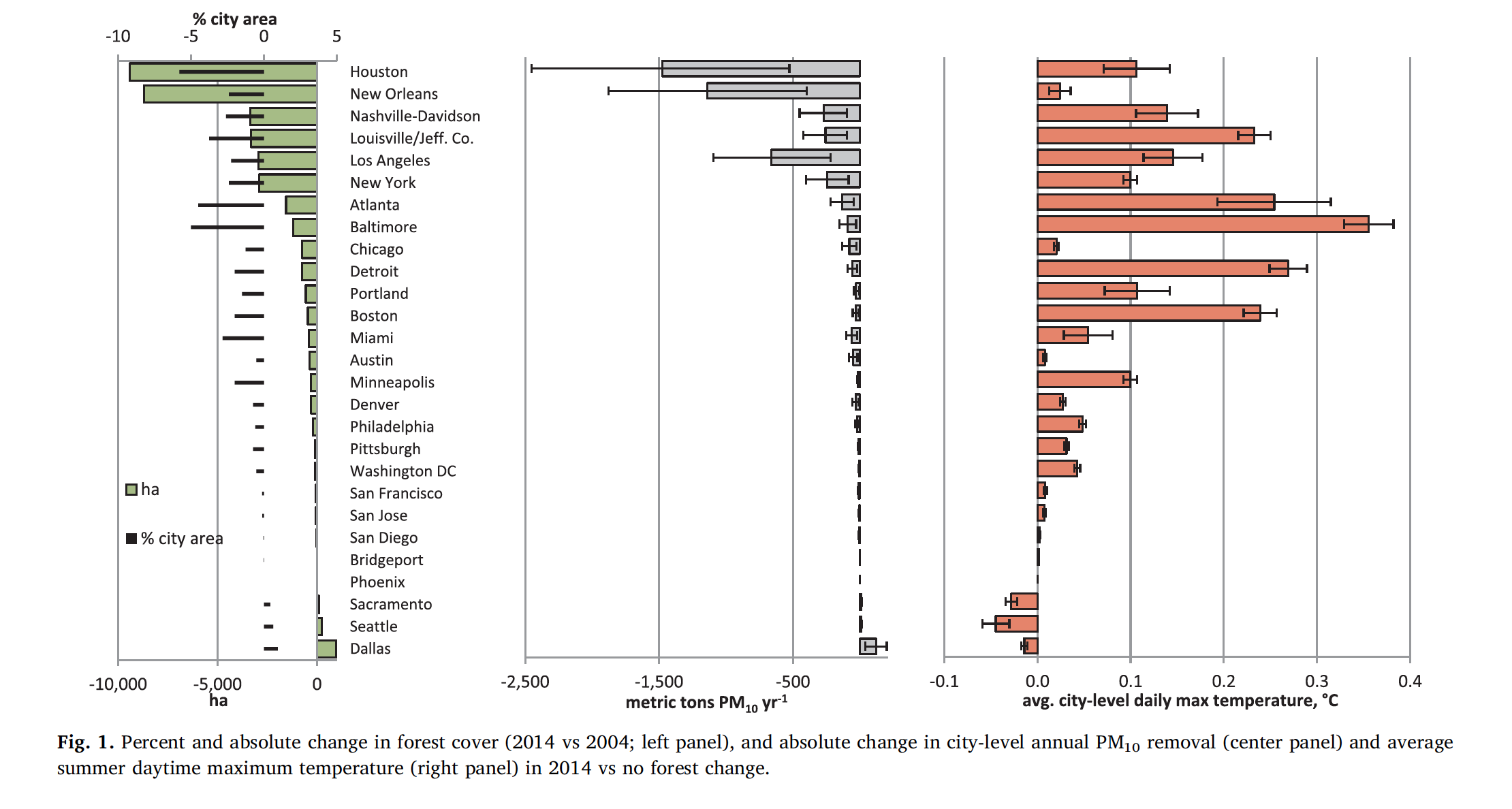 To calculate the ROI of tree cover, Kroeger and colleagues from the Conservancy and NASA, set out to identify where it would provide the largest health benefits – the greatest reduction of respirable particulate matter and heat for the highest number of people — and then measure how those benefits compare to the costs of the trees.

Their paper, “Where the people are: Current trends and future potential targeted investments in urban trees for PM10 and temperature mitigation in 27 U.S. Cities,” recently published in Landscape and Urban Planning, examined how much respirable particulate matter (PM10) and summer heat mitigation was lost over a recent ten-year period due to tree cover change in 27 U.S. cities, and, perhaps more importantly, how much additional mitigation could be achieved by increasing tree cover in those cities.

“We focused on summer heat and air pollution,” says Conservancy scientist and contributing author Rob McDonald, “because these are big concerns in many cities, with heat especially likely to become even more so due to climate change, urban expansion and vegetation loss.”

The team then identified potential tree planting sites in each city (nearly 1.9 million sites in total) using the highest-spatial resolution publicly available urban tree cover and land use data. Using published studies, they estimated the size and reach of the heat and PM10 mitigation produced by each prospective planting site, and overlaid these estimates with U.S. Census population data to map the number of people that would receive heat and PM mitigation from each planting site.

“Combining our estimates of mitigation effect, affected number of people, and tree planting and management cost,” notes Kroeger, “we calculated how much heat and PM10 mitigation could be achieved for how many people for given annual investments in urban reforestation.”

The results? They’re pretty exciting because the team found that targeted urban reforestation in 27 U.S. cities could lower average annual particulate concentrations in each city by about 10 percent for 3.4 to 11.4 million people.

Additionally, such targeted reforestation efforts could also lower average maximum daytime summer temperatures by more than 2 ˚C (3.6 °F) for 1.7 to 12.7 million people, at a combined annual cost of $102 million.

If you skipped over all the numbers to get to the bottomline, here it is: “Research shows,” says McDonald, “that the effects of such targeted urban reforestation efforts are large enough to provide meaningful public health benefits in terms of reduced mortality and morbidity.”

It’s also important to note that ROI in tree cover for reducing heat and PM exposure varies by over 10,000-fold among potential planting sites within each city. This means that there is enormous potential for targeting investments in additional tree cover at sites where they deliver the highest heat and PM reduction for the most people.

“For example,” notes Kroeger, “while planting trees on each possible site would be very expensive and would deliver successively smaller gains in mitigation, efficient targeting could achieve 80 percent of the heat and PM mitigation benefits of the maximum reforestation scenario at only half the cost, or half of maximum benefits at one-tenth the cost.”

Kroeger, McDonald and their colleagues are now working on a follow-up study a much larger number of cities in the U.S. and carry the analysis beyond exposure reduction through to health impacts. To do that, they are using published, city-specific dose-response functions for heat-related mortality and morbidity.

Having this kind of detailed information is important because it shows the quantifiable values – in terms of dollars and cents – that trees provide their cities. These kinds of valuations continue to show just how much value nature adds to the plus side of the equation when people are deciding where to allocate their limited public health and city management budgets.

Where Did Pigeons Come From?

To Protect Nature, Cities Matter in the Urban Century

Why Do Flickers Knock on Your House?

Should You Provide Water for Birds in Winter?