For those of us who love the outdoors, one of nature’s best qualities is one that we can’t see — silence. Or rather, the absence of running engines, honking cars, and blaring stereos.

But unfortunately, noise pollution is encroaching on wild places, harming both human enjoyment and wildlife. New research shows that a majority of protected areas in the United States are threatened with significant noise pollution at levels high enough to cause harm to wildlife, ecosystems, and human visitors.

Every wild place has a soundscape — a characteristic assemblage of sounds unique to that location. Wind rushing through mountain passes, rain pattering on leaves, elk bugling, spring frogs chirping; each of these sounds adds up to a soundscape. But increasingly, those soundscapes are being polluted with other sounds: roar of a jet flying overhead, passing cars, or other anthropogenic noise.

We’ve long known that traditional pollution sources — chemicals in the water, particulates in the air — harm wild ecosystems and threaten human health. Now, scientists are just beginning to understand the effects that noise pollution can have on wild places, too. And one of the first steps is figuring out just how many wild places are affected by anthropogenic noise.

The National Park Service collects acoustic recordings in national parks, yielding a database of 20 years of recordings from 492 sites across the contiguous United States.  “We wanted to use those recordings to create predictions of sound levels across the country,” says Rachel Buxton, a conservation ecologist at Colorado State University and lead author on the research.

Joined by scientists at the National Park Service, Buxton first used those recordings to feed a geospatial sound model of the country that takes into account dozens of sound sources, like distance from a road, airplane flight paths, weather systems, and proximity to rivers.

Based on previous studies, Buxton and her colleagues used sound levels of 3 and 10 decibels above normal as their thresholds for noise pollution. She explains that those figures represent a doubling and 10-fold increase in sound energy. They also equate to a 50 and 90 percent reduction in listening area. 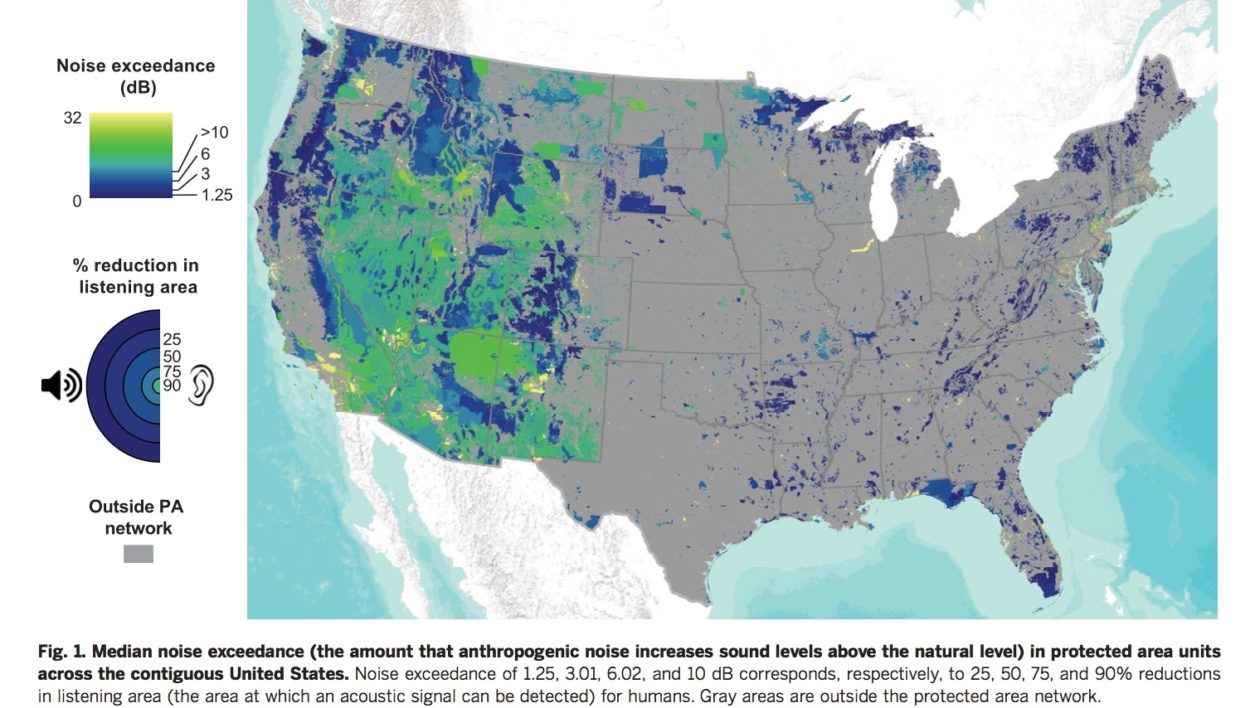 “It was quite a bit more than we were expecting,” says Buxton. “We think of protected as these places we go for respite and to get away from hustle and bustle, and we were really surprised that that didn’t show up more in the data.”

Even though protected areas experience less noise pollution that non-protected areas, anthropogenic noise is still pervasive throughout the majority of these wild places.

Buxton and her colleagues also found that the type of protection influenced levels of noise pollution. They analyzed protected areas against rankings from the International Union for Conservation of Nature that categorize various levels of protection. The more stringent the level of protection, the quieter the protected area. Areas used for resource extraction and other intense land-uses were the loudest, while wilderness areas — the most strict classification — experienced the least noise pollution.

But Buxton says that this relationship isn’t intentional, it’s a by-product of managing for human activity. “In wilderness areas they’re not intentionally managing for noise,” she says. “They just prohibit many sources of noise.”

Wildlife in A Noisy World

Both the spread and severity of noise pollution in our protected areas is concerning, given their role as critical habitat for wildlife as the human footprint spreads.

Anthropogenic sound can affect wildlife in several different ways. First, it can mask natural sounds, making it difficult for species to communicate or hunt for prey. It can also disturb wildlife and cause them to flee an area, creating added stress or jeopardizing their access to needed resources. And finally, noise pollution can act as a distraction, causing animals to ignore more critical needs, like foraging for food.

“All of these things together have real impacts,” says Buxton. “They can lower fecundity or even shift distributions of animals.”

Noise disturbances alter how black-chinned hummingbirds and western scrub jays pollinate and disperse seeds of the pinyon pine. The sounds of airplane flyover and motorcycle engines change the call rate of vocalizing frogs, while traffic noise disrupts the foraging activities of bats.

“The natural sound sources in a park are extremely important and valuable to people,” says Buxton. “Americans take pride in national parks and these beautiful natural sounds are another thing that deserve our appreciation, and our protection.”

What Scientists Can Learn from Sound and Silence