When most people think about alternative energy sources, Pacific giant clams probably do not spring readily to mind. Within their iridescent tissues, however, the world’s largest clams may well hold the missing link to finally enable the efficient (read: commercially viable) large-scale production of clean biofuels from algae.

NatureNet Science Fellows at the University of Pennsylvania

From studying the galactic mysteries of the Milky Way to dissecting Pacific ocean mollusks that can grow to the size of a large Samsonite (at up to about 1.4M, think checked baggage, not carry-on) – it’s definitely not the typical research arc for an astrophysicist with a Ph.D. in physics and an expertise in sophisticated scientific computer modeling.

But for Vahidinia, who is currently working on a Conservancy NatureNet Fellowship in Dr. Alison Sweeney’s Lab at the University of Pennsylvania and using the supercomputing facility at the NASA Ames Research Center in California, it makes perfect sense, both personally and professionally. “I love to connect dots, to see how things relate,” she says. “For me, science is about discovery and solving problems. There’s no bigger problem right now than climate change and to solve that, we need new forms of energy. So: giant clams.”

It’s All About Efficiency

To understand the true significance of giant clams to alternative energy production, you need to understand two things: (1) current roadblocks to cost-efficient algal biofuel production, and (2) how the clam’s unique space-saving system for harvesting energy from algae could solve that problem.

Efficiency is both the watchword for and the obstacle to current clean energy technologies — to be useful, new power sources must be commercially viable, which, in the simplest terms, means they need to produce significantly more energy than they consume in production.

Right now, the key problems with producing clean energy from algae come down to production inefficiencies; primarily because current bioreactors must constantly stir the algae to keep them exposed to sunlight as they grow.

From Around the Web

“It takes a lot of energy to keep stirring those big pools of algae,” says Vahidina. And because algae need to have a lot of exposed surface area, algal biofarms can take up a lot of acreage.

Which brings us to giant clams. “They are really nature’s solar transformers,” explains Vahidinia. “In the nutrient-poor waters of places like Palau, the clams evolved amazing algae farms that convert sunlight into food. But what makes them extra special, though, is the way they create energy in very little space because they make extremely efficient use of sunlight to feed the algae that lives in their tissues.”

The secret seems to be in cells called iridocytes, and the way they scatter sunlight to the symbiotic zooxanthallae algae within the clams’ tissues. (Iridocytes are what give giant clams their startling iridescent coloring — from orange, to blue, purple, green and yellow.) 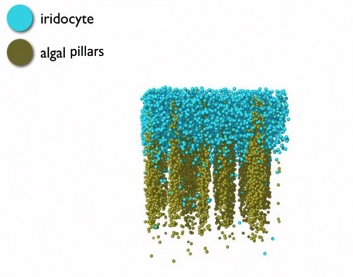 Their space-saving secret? The algae that live within the clam are arranged vertically, instead of horizontally with a layer of iridocytes across the top, like a blanket.

The iridocytes’ role seems to be to diffuse sunlight into the clam’s tissues in the way that is most efficient for the algae. According to light modeling done by Vahidinia and collaborators, iridocytes scatter many different wavelengths in the shape of a cone that sends light deeper into the tissues of the clam. 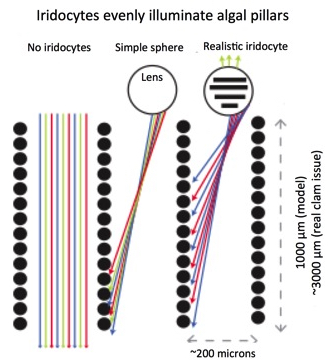 The structure favors the red and blue wavelengths, the most useful to the algae, by spreading them the widest, and enables the light to reach the sides of the pillars in which the algae are essentially “stacked.” This enables the clam to support an extraordinarily large population of active algae in a compact space.

Vahidinia’s NatureNet project is a continuation of work that began with Alison Sweeney and collaborators when Vahidinia was a postdoc at NASA Ames Research Center. Now, she’s continuing this work with Dr. Sweeney’s group and a new team of material scientists at the University of Pennsylvania — to try to build structures in the lab that can mimic the light-scattering efficiency of the clam system.

The materials science group at Penn is fabricating synthetic iridocytes in the lab — using nanoparticles in different shapes and sizes to try to mimic the way iridocytes scatter light vertically. The next step is to see how to combine that with growing algae. The goal is to re-create the iridocytes’ properties so that, ideally, algal biofuels could be produced much more efficiently, using far less energy and space.

“Of course,” Vahidinia says, “the question we’re trying to answer is, ‘will this photobioreactor modeled on giant clams be more efficient than what’s currently commercially available?’ And the answer is, we don’t know yet. It’s a process. We have a back of the envelope calculation of the efficiency of the clam system and its four times higher than U.S. Department of Energy’s target efficiency for 2020.”

R&D for the Future of Conservation

It’s a process with tremendous potential to revolutionize the use of renewable energy from algal biofuels.

For now, the materials scientists continue to fabricate prototypes in the lab and Vahidinia does the modeling to guide their development, along with Dr. Sweeney’s group’s continued effort to further understand the clam system and its photosynthetic efficiency.

“The collaborative nature of the work is really exciting,” says Vahidinia. “We work across disciplines, from marine biologists to physicists and materials scientists in the lab to create something that has potential to improve things far beyond the walls of the university.”

It’s this collaborative view of applied science, the trial and error role of research and development in creating breakthroughs to solve real-world problems that the Conservancy’s NatureNet Science Fellows program was developed to foster and incubate.

For the Conservancy, this kind of research is valuable not just because of its potential to improve renewable energy sources and limit greenhouse gas emissions, but also because anyone who cares about conservation, has to care about land use. To find ways to provide energy for a growing world population, we have to find ways to sustainably intensify our energy production without increasing its footprint.

We have to continue to explore and experiment and see what we can learn — from the rings of Saturn to the cells of Pacific giant clams.

A pursuit of The Nature Conservancy and leading research universities, the NatureNet Science Fellows program is a trans-disciplinary postdoctoral fellowship aimed at bridging academic excellence and conservation practice to confront climate change and create a new generation of conservation leaders who marry the rigor of academic science and analysis to real-world application in the field.