What can light beams tell us about the state of tropical forests?

New research from Nature Conservancy scientists demonstrates that lidar — a way of remotely mapping forests with lasers — is an effective and accurate tool to measure the effects of reduced-impact logging in Indonesia, but it’s still not as cost effective as traditional ground-based monitoring.

Think of lidar as light-based sonar.

“It’s like dolphins flying through the air using light instead of sound searching for trees instead of fish,” says Peter Ellis, a forest carbon scientist at the Conservancy.

A specially equipped airplane flies over a tract of forest, beaming down pulses of light and measuring the amount of time it takes for those pulses to bounce off the vegetation and return to the airplane.

“This is the type of technology that the military uses to understand the exact dimensions of Osama Bin Laden’s compound,” says Ellis, “but for forestry, lidar gives us a very rich, three-dimensional map of forest vegetation that you can slice and dice in all different types of ways.”

The real value to lidar is being able to map all of a forest’s vegetation, even below the treetops. “When you are on the forest floor, you’re never totally in the dark, even if the canopy over your head is really dense.” says Ellis, “Some light always gets through.”

Depending on the strength and frequency of the lidar pulses, some of those beams penetrate through the treetops and bounce off the lower-level vegetation, providing data on the forest structure below the canopy and topographic dimensions of the ground.

And that means it could be possible to pick up on the sub-canopy disturbance of selective logging, perhaps even more cheaply than paying field workers to do the same monitoring by hand.

If a tree falls in the woods, it doesn’t matter if anyone hears it — it still releases carbon dioxide. But previous research from the Conservancy’s forest carbon team demonstrated that loggers can greatly reduce emissions with relatively simple changes, a strategy known as reduced-impact logging for carbon (RIL-C). These simple modifications include reducing the width of skid trails or haul roads, leaving hollow trees standing, or felling trees in a specific direction to create less collateral damage.

“In Indonesia, we think that RIL-C strategies can reduce logging carbon emissions by about 40 percent,” says Ellis. “But then the question becomes how do you detect if someone is actually implementing these techniques and how do you measure if there is a reduction in emissions?”

Ellis and his colleagues developed a field methodology, certified by the Verified Carbon Standard, to monitor the impacts of RIL-C logging on the ground. Ground-based monitoring systems are typical of reduced-impact logging, because while it’s easy to see a clear-cut swath of forest on satellite or other aerial imagery, a missing tree here or there is much more difficult to detect.

“We wanted to see if there is a role for lidar to play in this whole monitoring system,” says Ellis, “and if it was affordable enough to be a realistic option for non-profits and governments.”

Joined by Bronson Griscom, the Conservancy’s director of forest carbon science, Ellis selected five logging concessions in the East Kalimantan region in Indonesia. After the loggers finished, they and their colleagues spent weeks in the field mapping skid trails, logging roads, and the extent of the sub-canopy disturbance from this activity.

“It’s not very glamorous work,” says Ellis, “you’re just climbing up and down really steep, muddy skid trails and sweating profusely while the sweat bees swarm around you.” (He wore soccer cleats as an added measure of slip-protection.)

Ellis and Griscom then commissioned a plane to fly commercial-grade lidar over the same areas, about 17 to 32 months after logging was finished. Ellis then manipulated the three-dimensional lidar data into a two-dimensional image to map the labyrinthine network of skid trails, logging roads, and missing trees.

Finally, Ellis and Griscom partnered with Wayne Walker, Fabio Gonçalves, and Tina Cormier at the Woods Hole Research Center, who are using a new technique to manipulate that same data into a biomass map, which shows the density of vegetation over the same area. This method allowed them to detect spatial variation in carbon density over the same logged areas. 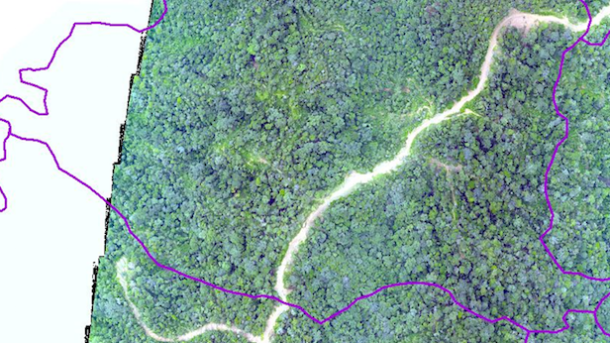 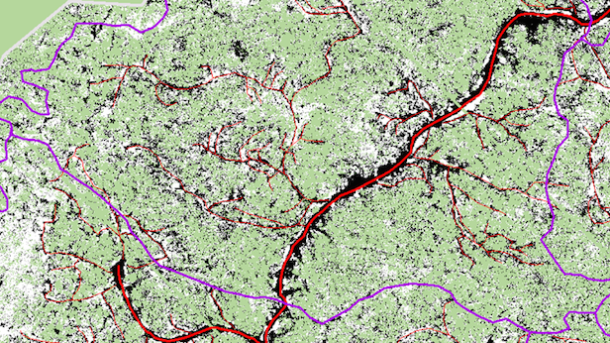 Comparing the three datasets allowed Ellis and Griscom to judge the both effectiveness of lidar as a detection tool and how well their earlier ground-based measurements lined up with the lidar and biomass data.

The short story: their results show that both the two-dimensional impact map and the biomass map derived from the lidar data matched up extremely well with the ground-based measurements, meaning that lidar can effectively pick up on forest degradation.

Ellis then conducted a cost analysis to see which method was cheaper at this scale. “Surprisingly, lidar is not really cheap enough yet to beat out paying a guy on the ground to run around with a GPS,” he says.

Ellis thinks that if the associated costs come down — renting the equipment, chartering the airplane, flight permits — then lidar could be much more competitive than it is now. He also suspects that lidar could be extremely useful in pre-logging planning, helping companies map out the fastest (and least-destructive) route from tree to tree.

The lidar data also helped the team reveal a blind spot in their more limited field-based analysis: like many field-based studies, their prior study didn’t properly sample the extent of logging impacts and missed unlogged locations that constitute approximately 30 percent of the total harvest area. This discovery highlights a large opportunity to reduce impacts through better planning — by avoiding large areas of sensitive habitat, steep slopes, or stream corridors without reducing wood production.

“RIL-C is important because it is one of just a few strategies in forest conservation that can improve forest integrity while maintaining a global commodity and providing jobs,” says Griscom. “It’s important not just because it generates a nice chunk of emissions reductions, but also because it does so in green-development friendly way.”

The first step to implementing RIL-C beyond Indonesia, explains Griscom, will be to have an affordable measurement and verification system in place. And while boots and GPS on the ground are cheaper for now, lidar’s role in forestry is on the rise.

The Carbon Cost of Converting Peatlands to Oil Palm