For Chris Clapp, a marine scientist for The Nature Conservancy in New York, restoring one ecosystem meant looking farther afield at others. He and conservationists throughout the United States and the world are grappling with the fact that in addressing nutrient pollution from wastewater, the culprit is in our own backyards.

This summer’s issue of Nature Conservancy magazine focused on how scientists are addressing the world’s freshwater issues. Read more water stories from the issue. 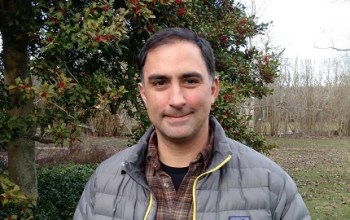 As a scientist initially focused on Marine Habitat restoration, Chris could not ignore the impact of the incoming water quality on those habitats. His focus is on bringing new technology, specifically wastewater treatment and monitoring, to municipalities around Long Island and beyond. Chris’ current work is looking at what policies and funding mechanisms would enable new technologies to be utilized to protect drinking water which some 3 million residents rely upon as well as the surface waters which provide the major economic and ecologic value that drives Long Island’s economy and way of life.

Q: When you first started working for The Nature Conservancy in New York years ago, you ran into a bit of an ecological conundrum off Long Island. What happened?

I was part of a small team brought in to restore hard clams to Great South Bay on the southern side of Long Island. We were monitoring the shellfish, but they just never seemed to be as healthy where we were trying to restore them as in the areas where we were transplanting them from.

Q: So what did the team do?

Around that time, we brought in folks from Woods Hole [Oceanographic Institution] on Cape Cod to do what’s known as a nitrogen-loading model. That was when we learned that close to 70% of the nitrogen coming into Great South Bay—nutrients that were fueling different types of algae—were coming from septic systems and cesspools.

For decades, people here on Long Island were told that our water-quality problems were coming from stormwater runoff, so it was a really big surprise to us and to most regulators. We didn’t know that three quarters of Long Island’s Suffolk County had no municipal sewers. It was all cesspools and septic systems, which are not designed to remove nutrients—or anything else for that matter.

Q: How do those nutrients end up in Great South Bay or even Long Island Sound on the north side of the island?

Well, Long Island is basically a really big sandbar. So everything that goes onto the land here either becomes our drinking water supply because we rely on the aquifers below our feet or it slowly seeps [over years] toward the ocean or one of the estuaries that ring the island.

And sandy soils are not very good at breaking things down. They’re good at removing bacteria and viruses and such but everything else—the nutrients, the pharmaceuticals, personal care products, herbicides, pesticides, the rest of that stuff—just joins in with the groundwater and travels to the shoreline.

Q: Why is that a problem?

If you fertilize your lawn, it turns really green, right? Basically what we’re doing is fertilizing our groundwater and then that nutrient-rich groundwater is seeping into our bays and harbors, fertilizing our bays and harbors. The more opportunistic species—plankton and algae—take advantage of all those excess nutrients [and grow quickly]. They can cause harmful algal blooms; they can cause fishkills; they can cause acidification that far exceeds the ocean acidification that’s driven by too much carbon dioxide in the air.

It’s a whole suite of cascading problems. And some of those harmful algal blooms are toxic to marine life and people. The majority of Long Island’s income is from tourism, and if you can’t swim and play in the water, you lose a part of your economy.

The overall goal is swimmable, fishable, drinkable water. The means to get there can be different based on what type of community you’re in. A few areas might need to be “sewered,” but the big push at the moment is for the use of on-site [wastewater] treatment systems that would replace your cesspool or septic system. It’s like a mini sewage treatment plant in a box that would go in your lawn. They are proven around the country and around the world. It’s just a matter of bringing that industry here and then providing a funding source for people to upgrade to these treatment systems, so that in the future the government could actually require new construction to have them.

Q: That’s a long process. At the moment, how are the transplanted shellfish doing in Great South Bay?

The shellfish are not doing as well as we’d like because the water quality challenges are so large. Great South Bay has an enormous watershed where someone could flush their toilet or fertilize their lawn today and my grandchildren will see it hit the water. So this is a generational challenge. It took us two or three generations to get where we are, and it’s going to take another generation to get out of it.