Every day pipes, electrical cords, cars and more give off heat as they’re used. Haoran Yang, a former Nature Conservancy NatureNet Science Fellow at the University of Pennsylvania, explains how his and others’ research could be used to turn that excess heat into electricity.

A version of this article originally appeared in the December/January 2017 issue of Nature Conservancy magazine. Read more from this issue nature.org/magazine. — NCM 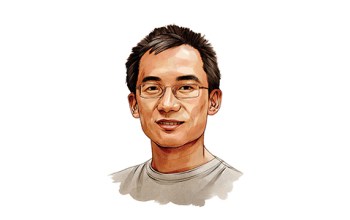 Yang’s research is focused on developing nanostructures for thermoelectric energy conversion. He recently completed a NatureNet Fellowship in Christopher B. Murray’s Lab at the University of Pennsylvania.

Q: Our lives are surrounded by machines that produce waste heat. How big a problem is that?

It’s a huge problem. According to research done by the Lawrence Livermore National Laboratory, in the United States, people waste about 60 percent of the total energy we harvest, and this wasted energy is materially heat loss. That inspired me to study thermoelectric materials so that we can harvest [electricity from] some of this waste heat.

Q: How do thermoelectric materials work?

If you have a thermoelectric material with a temperature difference—so, for example, one side is hot and one side is cold—what happens is that the electrons in this material will migrate from the hot side to the cold side, and this directional movement of electrons is electricity.

What we can do is change the structure of a material at the nanoscale so that its properties can be changed. I’m building materials from the nano building-block level—nanocrystals—and putting them together to construct an artificial structure that does not exist in nature.

The thickness of a hair is about 100,000 nanometers, so you can imagine how small the object we’re working on is. The physical phenomenon of the conversion between heat and electricity happens at the nanoscale.

Q: This research is a work in progress, but if you succeed, how will this improve heat-wasting devices like, say, cars?

Vehicles burn gasoline, but in this process more than 60 percent of the energy is wasted as heat. If we can build an efficient material, we can put a device around the exhaust pipe and convert some of the heat back into electricity. If we can convert 15 percent of the heat, we’re talking about a 15 to 30 percent increase in miles per gallon in a hybrid vehicle. That’s a huge deal.