On a farm in the heart of Illinois, nearly a decade and a half of experiments are unfolding. For six generations, the land’s owners, the Franklin family, have farmed their 250 acres along the Mackinaw River—a tributary to the Illinois River, which itself joins the Mississippi. The Mississippi has long struggled as fertilizer runoff from farms polluted its water and fed dead zones downstream in the Gulf of the Mexico.

Since 2014, the Franklin family has worked with researchers from The Nature Conservancy, the University of Illinois at Champaign-Urbana and elsewhere to test ways to reduce the amount of fertilizer washing into local rivers. Krista Kirkham, an aquatic ecologist for TNC in Illinois, talks about discoveries made there.

A version of this article ran in Nature Conservancy magazine’s Spring 2018 issue, which focused on how food can be produced more sustainably. Read more food and conservation stories here. 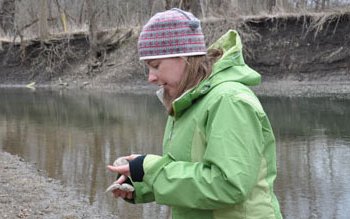 Krista is the assistant aquatic ecologist for the Illinois chapter of The Nature Conservancy. She and her team work with several agricultural agencies, landowners, and universities to implement and study agricultural conservation practices like constructed wetlands and how they can improve water quality in the tributaries to the Mackinaw River in central Illinois.

Q: In the Corn Belt of the Midwest—home to Franklin Farm—water polluted with fertilizer and eroded soil is a big challenge for farmers and conservationists. The Nature Conservancy first tried to address this in an earlier experiment, right?

Yes. For many years, we had worked with landowners in one watershed, about 10,000 acres, and compared water quality and biodiversity in an adjacent watershed where we didn’t put any best management practices.

Q: Practices like planting grasses to prevent soil erosion into creeks. What did you learn?

Well, after doing a lot of water chemistry analysis, we didn’t see any changes in water quality after seven to eight years. We needed a new direction: We had to address tile drainage.

It’s a series of perforated pipes underground meant to facilitate drainage. Historically this area was very, very wet and to make it amenable to farming you have to drain the water out. We’ve now moved on to the idea of using wetlands to intercept that drainage.

Q: In other words, you want to filter the water farmers are draining from fields. How do you study that?

Well, that’s how the farm work got started. We really needed to make sure we had a place to study wetlands—to make sure they’re effective AND TO learn how big they need to be to be effective.

Q: When the experiments at Franklin Farm began, what was the plan?

When we first started this project, the questions were, “Are wetlands good at reducing nitrogen and phosphorus runoff? And, if they are good, how big do they need to be to see any significant reduction?” So, ideally, you don’t want a massive wetland because that takes a lot of ground out of production [and] that’s a tough sell to producers.

Q: At Franklin Farm, you ended up building three sets of wetlands of varying sizes to test the filtering effect. What did you find?

Over the years we’ve been able to monitor the inlets and outlets of all of these different cells that we have on the farm. And to make a long story short: Yes, wetlands are quite effective at reducing nitrate levels and particularly orthophosphorous levels—the biological component of phosphorous.

Q: Which is great, because when those chemicals pollute drinking water they can cause health problems for people, especially kids. How do the wetlands work though?

In the simplest terms, people define wetlands as “nature’s kidneys” and that’s somewhat true. Really, you’re giving water a chance to slow down and interact with the sediment, where bacteria will do the work for you.

Q: And, the Franklin Farm research has shown, the wetlands don’t need to be huge to make a big difference, right? You monitored wetlands the size of 3 percent, 6 percent and 9 percent of nearby farm fields.

Right, we found, regarding nitrate, that even at the smallest wetland, we’re seeing a reduction of 12 to 24 percent. Then, it’s 36 to 44 percent. At 9 percent, we see a little more reduction but it’s a much less of a jump. That told us we don’t even need a big one to see some pretty significant results and that’s really encouraging.

Today the water experiments continue on the farm, joined with efforts to plant cover crops or restore unfarmed areas to native habitats. Researchers give regular tours to other farmers and researchers to share their findings and methods.