In exciting new research published in the journal Nature Food, The Nature Conservancy (TNC) and the Soil Health Partnership (SHP) set out to answer the questions: How do cover crops impact soil health indicators in SHP trials? Do we see evidence of changes in the soil, and how quickly do they show up in the data?

Although it might sound obvious that cover crops benefit soil health, much of the research on how soil health changes with adjustments in management practices is conducted in controlled, experimental settings—and many soil health indicators and processes respond slowly to management. That’s why it’s so exciting that we found evidence of soil health improving in the first few years of cover crop use on farms participating in SHP.

Using data from 96 farms (see map) over 3-5 years, we looked for changes in six key soil health indicators that are part of the Cornell Comprehensive Assessment of Soil Health that reflect the biological and physical properties of the soil: active carbon, soil organic matter, aggregate stability, available water capacity, respiration and soil protein. 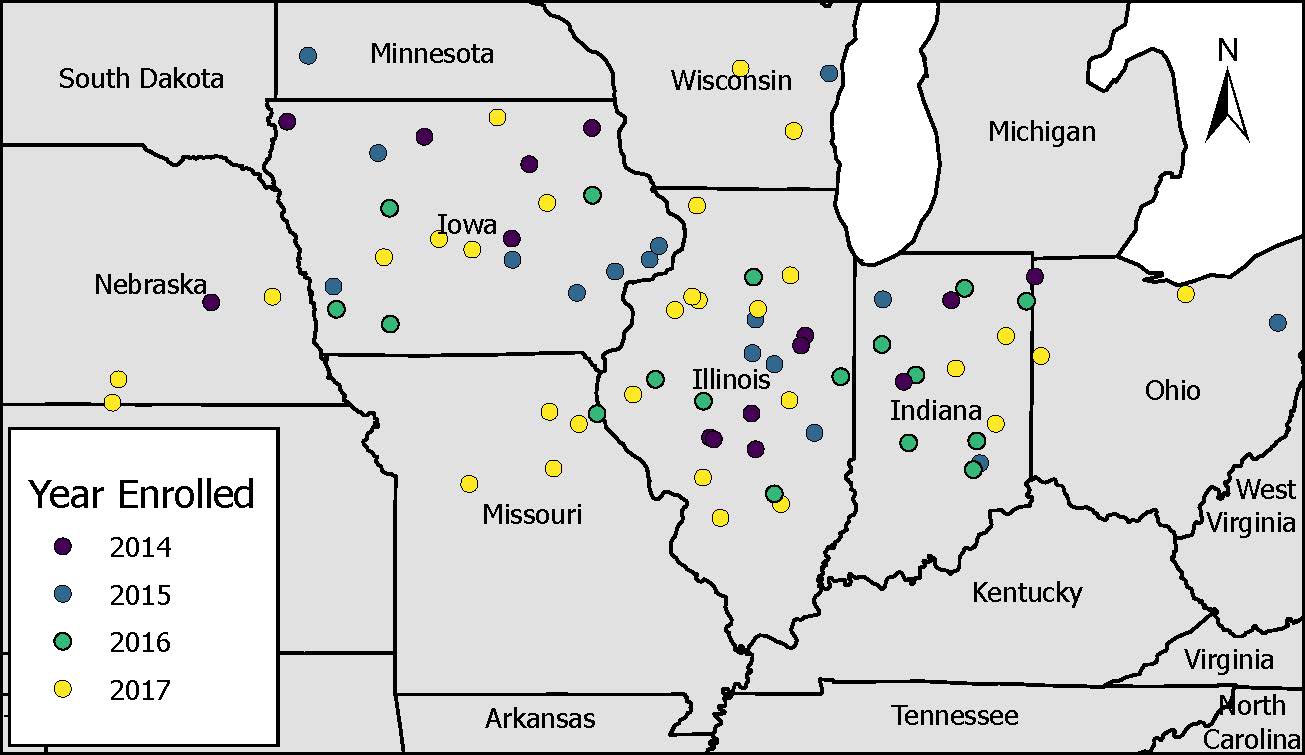 Four of these indicators showed evidence of change with cover crops, and the effect of the cover crop increased with the amount of time cover crops had been used on the field:

These indicators can translate into improvements in soil function around soil nutrient cycling and water management on the field, which can have benefits to farmers ranging from less erosion to fewer wet spots to longer planting/harvest windows thanks to improved field conditions.

Time and experience make a difference for soil health indicators

Similar to other research conducted by SHP, this study found that the benefits of soil health management are amplified with time and experience. With cover crops, we found that all of the soil health indicators mentioned earlier improve the longer this practice is in place (see below). This reinforces our recommendation that cover crops should be approached as a long-term investment and strategy, both to give growers a chance to optimize their system and to recognize the greatest benefits to soil health. 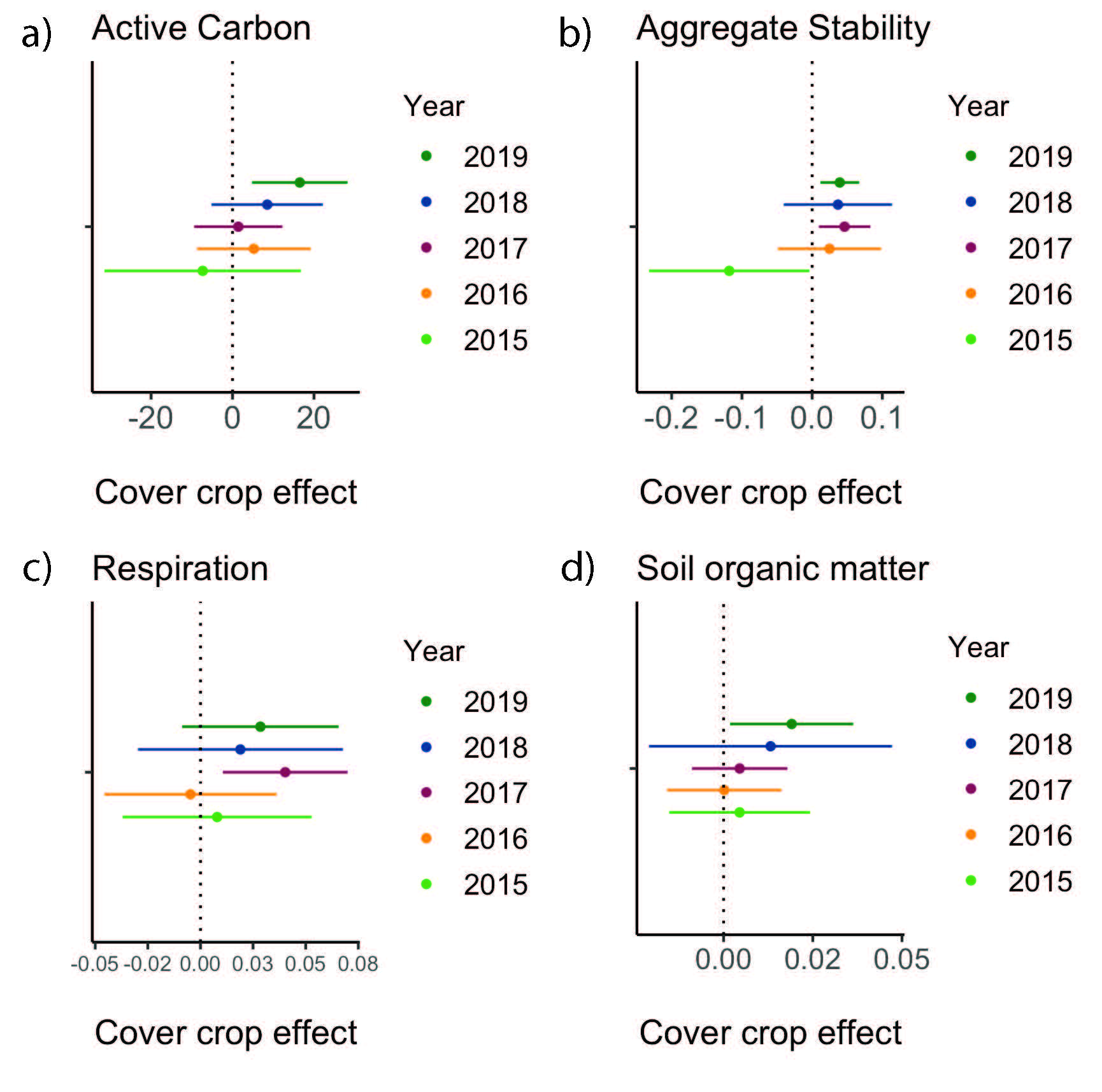 Although our work did show that soil health indicators are responding to cover crops, it’s also important to remember that, in many cases, these changes are small and still happen relatively slowly. For example, in our dataset, aggregate stability increased by 1.02% per year more on cover crop strips than control strips—and soil organic matter by 0.01% more per year. This is a big reason why farmers should not expect to see huge changes in indicators like soil organic matter in the first 3-5 years of cover crop use, or else they might run the risk of being disappointed.

“This isn’t to say that soils aren’t undergoing real changes early on, but just that it is hard to detect small changes with existing methods,” says Stephen Wood, Senior Scientist for Agriculture and Food Systems at The Nature Conservancy and a co-author of the study. “For instance, with organic matter and carbon, there’s a lot of carbon already in the soil, so what we’re trying to detect can be like finding a needle in a haystack early on.”

Laboratory indicators are also somewhat limited in their ability to reflect soil function in the field—so it’s important that farmers pay attention to how indicators like infiltration, soil structure, and compaction are changing over time. Just like taking a child’s temperature doesn’t tell us if they have a cough when they are sick, we can’t expect that laboratory indicators will give us a complete picture of soil health.

Finally, although observable changes in the soil can be an important benefit of cover crops, we know that some of the other benefits cover crops can provide might show up more quickly than changes in the soil—and be just as valuable. For example, cover crops can scavenge excess nitrogen and keep a living root in the soil during winter months when soil is most vulnerable to nutrient loss and erosion—which has proven benefits for water quality. Cover crop residue can also play a role in suppressing weeds that affect cash crop production and controlling the incidence in herbicide resistant weeds.

“When combined with longer-term changes in soil health, these short-term benefits add up – and can contribute to making cover crops part of a resilient and profitable soil health management system,” Bowman said. “With partners like TNC, we look forward to continuing to evaluate the impacts of soil health practices on agronomic, environmental, and soil health outcomes.”

Scenario Planning: Imagining a Healthy Future for Fisheries and Oceans

It’s a Trap: Managing Cowbirds to Save Songbirds