No Caribou for Christmas: A Disappearing Herd Now Down To One

The highway message board doesn’t quite capture the gravity of the situation. At the Kootenay Pass, on Highway 3 in British Columbia, it flashes a warning: “Watch for mountain caribou.”

What it really should say is, “Watch for Idaho’s last caribou.”

It’s the last animal standing for what has been the rarest large mammal in the “lower 48” of the United States.

And it is alone. There’s one caribou left in the South Selkirk herd, the only herd left that’s known to use Idaho historically. It’s in the Selkirk Mountains on the U.S.-Canada border. One cow that’s probably not pregnant because there are no bulls. One cow wearing a tracking collar. That’s how researchers know it’s lingering like a hitchhiker near the highway prompting the warning.

The lighted sign over Canada’s core artery is the most anyone can do until the temperature drops and more snow falls. Hopefully that happens before the cow tries crossing.

“Caribou are heat sensitive. They’re made to live in cold weather so they don’t dissipate heat well,” Merz says. “We’re waiting for cold and a lot of light, fluffy snow so when it runs there’s nothing that catches a leg and breaks it.”

And it will run. A decision was made previously that the remaining animals in this herd – back when there were animals plural, and not just one lone caribou – should be relocated so that they could add to the gene pool rather than disappear completely.

A helicopter will be deployed. That chopper carries a netter who will drop a mesh trap on the running caribou. Once netted, the last caribou claiming Idaho territory will solely claim Canada and never come back.

“It’s disheartening,” Merz says. “But I’m looking forward to getting her scooped up and getting her into a herd where she can reproduce and add to the population.” 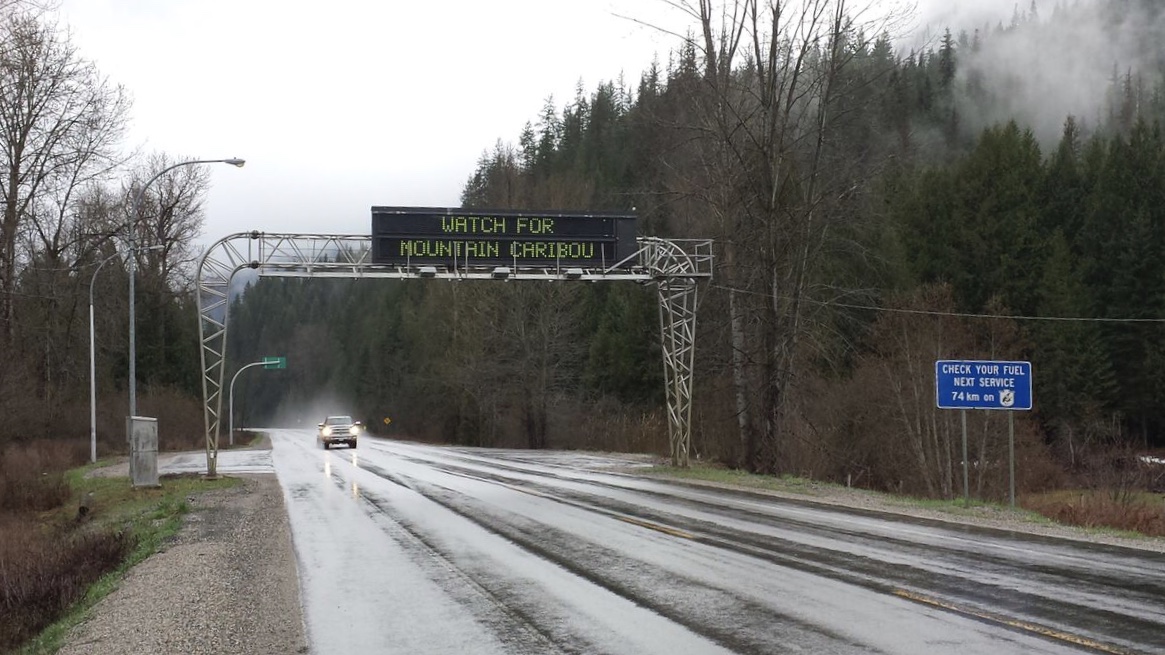 The South Selkirk caribou herd is one of 15 Southern Mountain caribou herds. All 15 live among British Columbia’s inland rainforests but only one, the South Selkirk, is considered transboundary with territory dipping into the U.S. The 15 herds total 1,200 animals, but none of them use the U.S. anymore.

“We tried,” Merz says. “There were a lot of people working hard, doing a lot of things and we’re still where we’re at.”

The conservation rescue mission came in stages in recent decades. Try less logging. Limit winter recreation. Subtract wolves. Supplement with other caribou. The try worked for a while. The South Selkirk population increased 2002 through 2009 peaking at 46, but in less than a decade, the herd dropped to three in 2018.

Researchers collared those three cows earlier this year. One collar failed, the cow’s fate unknown. A mountain lion killed a cow in August and then there’s the one hanging around Highway 3.

“If things are going well, you forget about it until there’s a problem,” Merz says. “That’s where we were with caribou. We kept an eye on them, but populations go up and down and that’s not a big deal. Then they took a strong downward turn.”

That downward turn is caused by many problems with varying influence. The first major problem is predators, but not a single type. British Columbia started killing wolves in caribou country in 2014. They killed 19 by 2017. There hasn’t been a documented wolf kill of caribou since then, but caribou keep dying.

“Wolves are not the main cause,” Merz says. “But wolves on top of mountain lions on top of bears are added mortality.”

The predators find the hunting easier due to changes in the forest. Abundant prey in the form of white-tailed deer have moved in. But lions, bears and wolves will also kill a caribou while they’re stalking deer.

The second problem is trees. Southern Mountain caribou, like the solo Selkirk cow, seek aged, high-elevation stands. They live among trees that withstand more than 30 feet of snow annually. Selkirk caribou like deep snowpack for two reasons. Predators don’t spend time in snow piled that high and the lichen caribou like is high on those tall trees. Thick snowpack puts them within eat reach of it. Logging old-growth trees levels caribou habitat. Those clearings are a century from being caribou-worthy stands again so caribou move to lower, warmer country where more predators are.

The third problem is lichen. Southern Mountain Caribou eat lichen growing on trees rather than on the ground. Cut the trees, and you’re cutting caribou feed. Other caribou herds paw at lichen on the ground. Moving ground-lichen eaters into tree-eating range doesn’t work.

“We augmented the Selkrik herd with a British Columbia herd in 80s and 90s and it didn’t work well,” Merz says. “If we can rebuild the core herd in Canada, the plan is they’ll expand and get back to Idaho and Washington on their own.”

Plans take time. More time than caribou have, but there is a plan for the South Selkirk herd. The plan, completed in October, calls for 90 caribou. There’s a long list of agencies and funders in both countries supporting that plan. One element of that plan called for moving the remaining South Selkirk caribou to habitat where they could breed and pass on their genes.

In short, the one endangered Selkirk cow that could cross back and forth between Idaho and Canada is now going to be a permanent Canadian resident.

A British Columbia bull and a Selkirk cow can reproduce and chances are high that they will. A caribou’s pregnancy success rate is 95 percent as long as the cow is at least three years old. But at a rate of one calf per cow and less than 20 percent of those calves surviving, it will take decades to rebuild the herd.

“They’re slow to reproduce and have high calf mortality so the adults need to have a long lifespan,” Merz says. “Modify habitat and increase predator contact and that lifespan gets shortened. The population goes south in a hurry.”

To reverse that, the cold needs to hurry and the snow needs to hurry. The last Selkirk caribou is at the Canadian border. It needs to cross safely, preferably by capture, if it’s going to restore the lower 48’s caribou, the undomesticated version of reindeer.

BirdCast: It’s Like a Weather Forecast, But for Birds

8 Bird Migration Myths, From Past to Present

The Sound of Merlin: Like Shazam, but for Birds