It’s not just about cars and smokestacks, nature matters, too.

Do you hear the words “greenhouse gas pollution” and immediately flip through a mental slideshow of billowing smokestacks and endless highways jammed with idling cars? I do. Or at least, I did, until I started digging into the growing body of climate change science that shows just how much nature – and the way people use, manage and conserve habitats around the world – is also part of the greenhouse gas pollution story, for good and for bad.

First the good, in the last year alone, Conservancy scientists, partner institutions and research universities have shown increasingly strong evidence that nature can help mitigate some of the human emissions of greenhouse gases in significant ways.

In the U.S., forests, wetlands and agricultural lands could absorb a little more than 20 percent, or about one-fifth, of the country’s greenhouse gas emissions annually. To put it in that increasingly problematic metaphor we’re all used to, that’s equivalent to removing the emissions from all vehicles on U.S. roads. Every year. 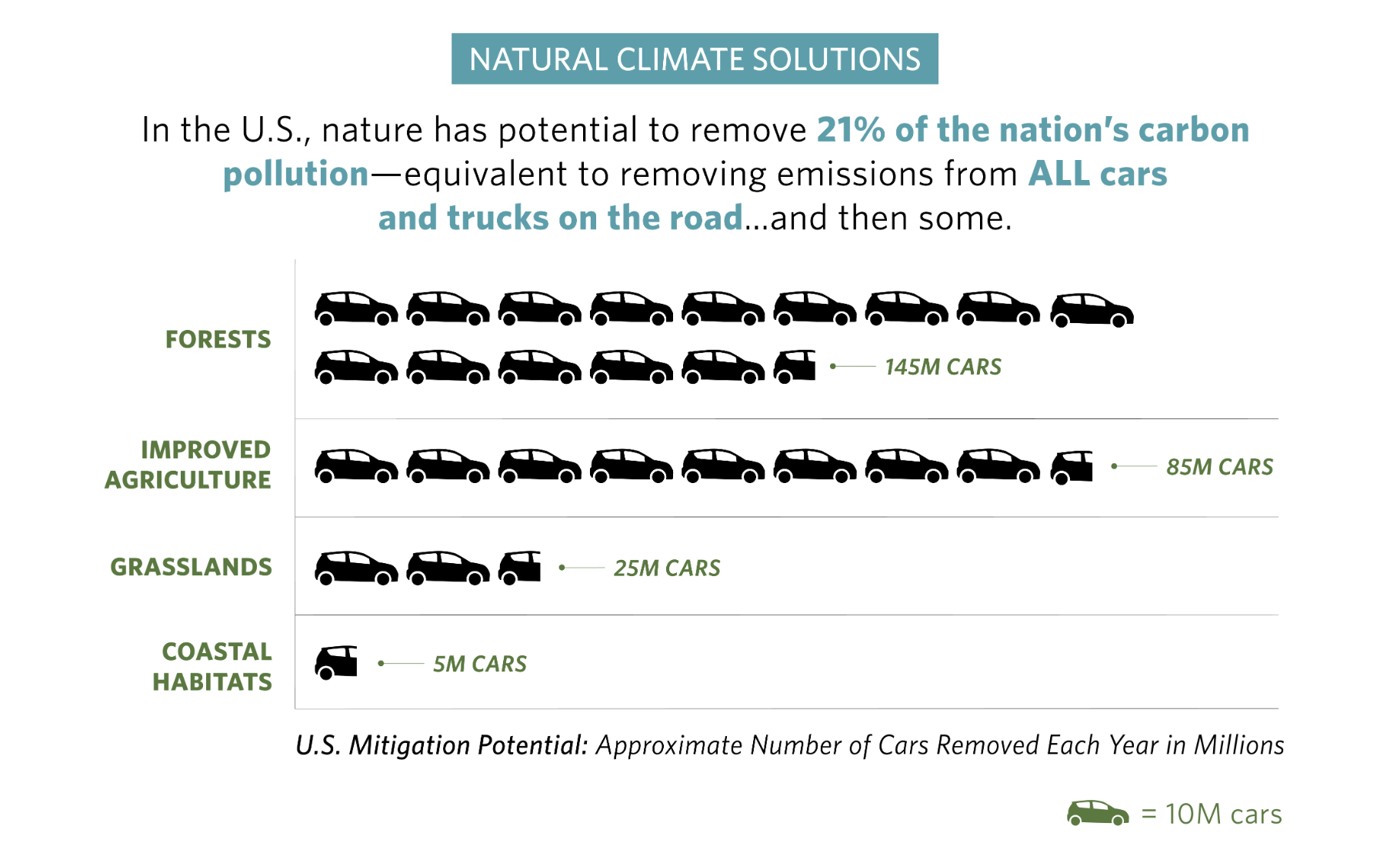 So far, so good. The ability of well-managed and intact forests and farmlands to absorb greenhouse gases, like carbon, has been studied for some time, but the inclusion of wetlands in the greenhouse gas equation is something that’s just come into sharper, quantitative focus recently.

In fact, 2017 was the first year the U.S. included coastal wetlands in its annual Greenhouse Gas Inventory because there were scientific advances and international guidance that enabled scientists to do so.

Nature is an Overlooked Climate Solution

There was good news there, too. According to a recent study published in Nature Climate Change by Conservancy scientists and partners from Florida International University, the U.S. Environmental Protection Agency and others, healthy wetlands (think wetlands covered with plants) are net sinks for greenhouse gases in the U.S. That means, on the whole, the country’s coastal wetlands remove more greenhouse gases – especially CO2 – than they release. For now.

“It’s only been in recent years that we’ve been able to truly recognize the important role wetlands play in sequestering carbon and other greenhouse gases, but we’ve also learned that they need to remain healthy and intact to continue providing that benefit,” said Ariana Sutton-Grier, co-author of the paper, and director of science for the Maryland/DC Chapter of The Nature Conservancy. “That’s why acquiring a widespread assessment of our existing wetlands has become critically important, especially as we’re still losing wetlands on a global scale.”

The key to retaining and increasing the value of coastal wetlands for climate change mitigation can be summed up in three words: conservation, restoration and management. In fact, proper conservation, restoration and management of coastal wetlands provides multiple benefits, from protecting habitat for plants and animals, to providing clean water and flood protection for local communities.

The U.S. has some of the most robust wetlands protections in the world, but still loses large swaths of coastal wetlands every year with the biggest annual losses in the Mississippi Delta. (Louisiana is currently a kind of epicenter of wetlands loss in the Gulf, with estimates putting the pace of destruction at a football field’s worth of land lost every hour.) When coastal wetlands are lost to open water, it not only destroys their visible values as habitat and flood protection, it also releases the carbon that had once been stored in wetland plants and soils.

Of course, the causes of coastal wetland loss are varied, complex and often entwined, but that doesn’t mean they can’t be reversed, overcome and managed.

“Despite wetland losses,” says Sutton-Grier, “our paper shows that a few specific actions – all centered around how we protect, restore and manage our coastal wetlands now and in the future – could increase all of their values including the carbon they are storing.”

“In this study we looked specifically at the connection between coastal wetlands and greenhouse gas emissions and their ability to sequester carbon,” says Sutton-Grier, “but there are no downsides to healthy coastal wetlands.”

The Conservancy has multiple projects on the ground working specifically on conserving, restoring and successfully managing coastal wetlands to protect all of their values, including their value for climate change mitigation. Because the flipside of wetlands’ ability to store carbon, is their potential to release it when they’re cleared and drained for development, lost to erosion, or otherwise damaged. Right now, the U.S.’s wetlands are a carbon sink, but that could change if they aren’t managed carefully.

In Maryland, says Sutton-Grier, “we’re building on work the Conservancy scientists and partners have been working on in New York. We know that nutrient pollution makes wetlands less healthy. Our scientists have determined that excess nutrients (such as nitrogen) entering wetlands from upstream waterways or groundwater resulted in reduced root growth. Reduced root growth means less carbon storage and less healthy wetlands.”

“For Long Island Sound, most of the nutrients were coming from septic systems. In Maryland, we have similar challenges with nutrient run off going through coastal wetlands and into the Chesapeake Bay, but most of our nitrogen comes from agricultural fields.”

The Conservancy works with farmers and agribusinesses on Maryland’s Eastern Shore to accelerate the adoption of new and emerging technologies and best practices, from the precision application of fertilizer on fields to planting natural buffers between the fields and streams to help absorb nutrients before they reach the Chesapeake Bay and its fringing coastal wetlands.

Like everything, it all comes down to choices. The choices we make about how we use our lands – from forests to grasslands, to farmlands to wetlands – matters. Every day it seems there’s new science that shows us just how much our relationship to our lands and waters matters for our ability to mitigate the worst effects of climate change.

Which begs the question, why has nature been so thoroughly overlooked as an important part of the climate change equation? I think it goes back to that convenient mental shorthand – the problematic metaphors — we’ve used for so long: those billowing smokestacks and endless highways jammed with idling cars.

When the truth is, climate change requires both mechanical and industrial solutions, and a wholesale rethink of how we conserve, restore and manage nature — or how we don’t, and what that means for ourselves and for the generations that must live with our choices.