An Unusual Partnership for People and Nature

Standing in front of 200 insurance industry professionals felt strange, but “cool” to Siddharth Narayan. A coastal engineer studying natural coastal protections, such as wetlands and mangroves, he never expected to present his research to a packed room in the historic headquarters of insurance giant Lloyd’s of London.

But Narayan and his audience had a common interest – reducing risk – and the research was not just his, but born of an unusual partnership between fellow engineers, ecologists and experts from the likes of the audience themselves, the insurance industry. Their work is uncovering untapped, yet promising opportunities to safeguard coastal communities from storms and floods – through the marriage of insurance policies and habitat conservation.

Amid growing interest in leveraging nature-based solutions to mitigate the intensities of climate change, this unconventional alliance has endeavored to determine the true (dollar) value of coastal habitats as natural defenses and to translate that value into risk-reduction incentives for conservation or restoration efforts. By linking the unique knowledge and resources of these otherwise disconnected sectors, they are creating a win-win-win for insurance companies, communities and nature.

“The fact that we’re actually working with the insurance industry to do this is a sign of how far we’ve come in being able to recognize and measure the value of natural ecosystems,” says Narayan, who began this work as a postdoctoral researcher at NCEAS and is now at the University of California, Santa Cruz.

The genesis of this partnership stretches back to 2013, when it was one of the first working groups within the Science for Nature and People Partnership (SNAPP), a collaborative initiative between NCEAS, The Nature Conservancy and Wildlife Conservation Society that convenes teams of diverse experts to find science-based solutions that allow humans and nature to thrive. While the team’s tenure with SNAPP has ended, their work together continues – and they’re on a roll.

In August, they published a paper with uncanny timing and promising findings. Using risk assessment models that are practically the standard in the insurance industry, their study found that coastal wetlands prevented $625 million in damages during 2012’s Hurricane Sandy, and it came out right as two of this summer’s hurricanes, Harvey and Irma, were making headlines.

According to co-author and ecologist Michael Beck, this paper, which was funded by Lloyd’s, was the first done in partnership with the insurance industry to put a tangible dollar value on wetlands using “the highest rigor out there” – the insurance industry’s own terms and tools – a subtlety he says is far from trivial.

“We’re no longer talking about little ecological indices and then trying to convince the markets or someone else that ecosystems should matter. We’re using [industry] models, not anything else,” said Beck, a scientist at The Nature Conservancy and one of the co-principal investigators of the original SNAPP working group.

But connecting conservation and insurance wasn’t part of the group’s original pursuits. At their start, the team consisted of mostly engineers and ecologists – still a novel combination – who came together to synthesize the engineering evidence on the benefits of natural habitats as coastal protection.

As they began uncovering the mounds of data, however, a new question began to crystalize: what about the economic evidence? 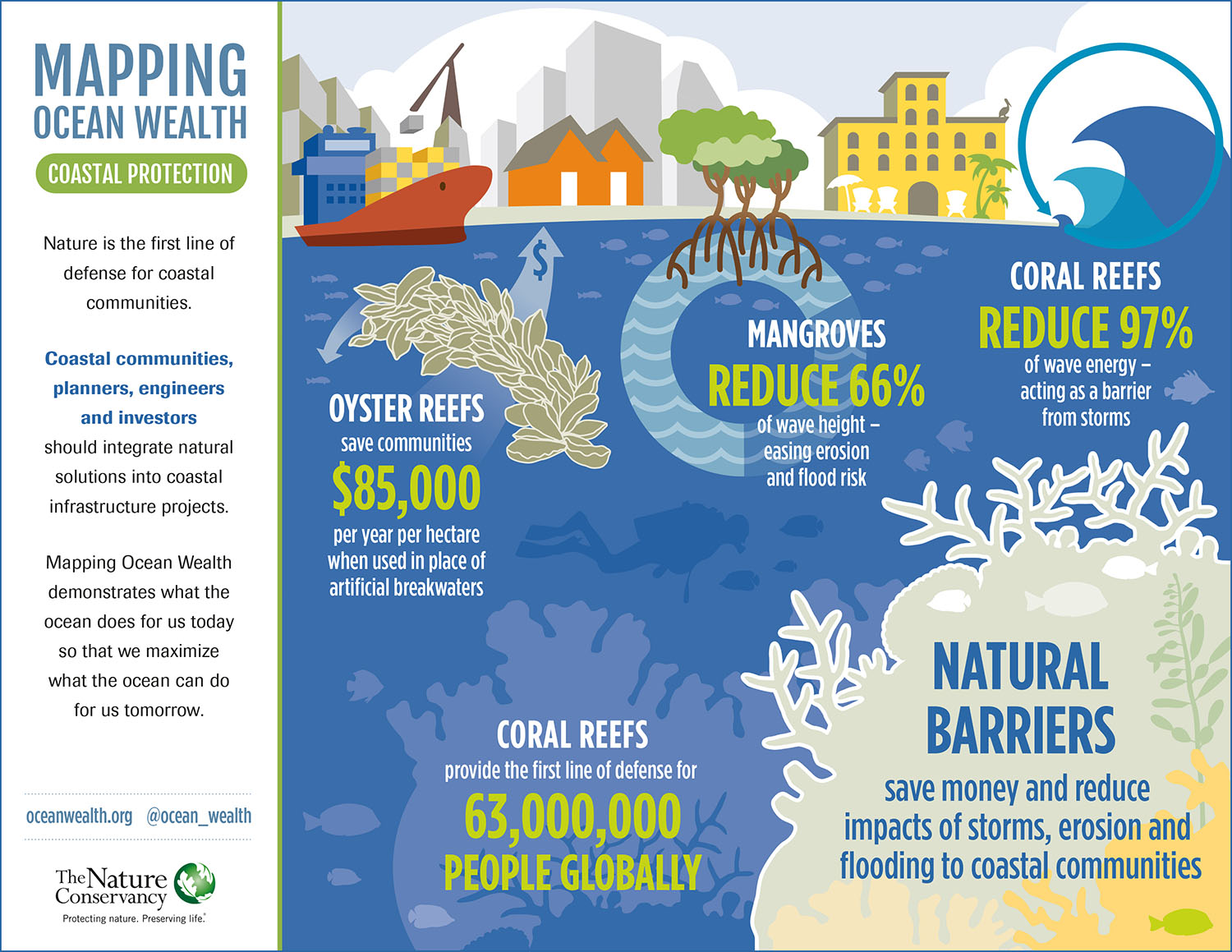 “We didn’t find much linking these benefits to costs, such as where these habitats would provide the most economic value,” said Narayan.

Knowing the dollar value of coastal habitats, in terms of how much loss they can prevent, could give decision-makers apples-to-apples comparisons with the costs of grey infrastructure, like sea walls, thereby showing them the cost effectiveness of conservation. As Narayan explained, no one is going to build a sea wall without understanding its risk-reduction benefits, so recognizing the value of ecosystems is an important first step.

With this new question, but without the people who could help answer it, the team’s other co-principal investigator, Jane Carter Ingram of Wildlife Conservation Society, invited former fellow Columbia University postdoc Guillermo Franco, now a managing director at reinsurance broker Guy Carpenter, to be the team’s insurance industry advisor. Franco, whose job is to help insurance companies understand risk assessment models, subsequently pulled in Paul Wilson, a chief modeler at one of the world’s largest risk modeling firms, Risk Management Solutions (RMS), who brought in the models the team ultimately would use.

In fact, the models became the centerpiece and veritable Rosetta stone for the collaboration, which initially stumbled over a hurdle all too familiar in interdisciplinary research – language barriers. Narayan, for example, chuckled as he admitted his reliance on Wikipedia to understand basic insurance lingo – he had an easier time with the models, since they were reminiscent of his own engineering tools.

Modeling collaborations between scientists and insurance are not actually new – think earthquakes and the science it takes to model what they can do to buildings. But, as Franco explained, conservation is a new frontier for insurance, the exploration of which has been stymied in part by budgetary priorities that can limit companies’ resources for research and in part by preconceived notions that make both the insurance and conservation worlds a bit standoffish toward one another.

“You can find a lot of expertise in the sciences among the companies that develop these tools, but knowledge about natural ecosystems is so specialized that it is rare or completely absent. So, to make it available to them, that’s already a big step forward,” said Franco.

As a case in point, one of the key questions that had surfaced in early conversations was whether the models even included wetlands in the risk-reduction equation – even Wilson and Franco weren’t sure. Indeed, they discovered the models did include them, but no client had ever asked RMS about their value as hazard protection.

“In making these models, we make a lot of assumptions – about the depth of the water, the roughness of the coast, etcetera,” explained Franco. “By helping these [modelers] make better assumptions on those parameters, we are improving the risk assessment tools. And by improving the risk assessment tools, we’re providing the industry with better mechanisms to price [products].”

In other words, if the models show wetlands, mangroves and other coastal ecosystems do indeed reduce monetary losses from natural disasters, the insurance companies can translate those results into lower premiums for property owners who conserve or restore these habitats or direct investments in conservation through reinsurance purchases, for example.

By connecting ecosystem researchers and risk reduction modelers, Franco believes the team is helping to raise awareness that conservation should be embedded within the industry. In turn, by using risk industry models, the conservation message gets a boost in credibility, visibility and uptake.

“When we talk about the fact that we can quantitatively value these benefits in ways that could show up in insurance reductions and in investments that pay for themselves, it matters,” said Beck, noting that the funds currently spent on “green” infrastructure are “paltry” compared to the billions – even trillions – spent, in particular, on rebuilding grey infrastructure post storm.

Hurricane Sandy alone caused $70.2 billion in losses and cost the US federal government $56 billion in relief spending. About one percent of those funds, or around $500 million, went to green infrastructure.

“I actually think that, because of this work, we can do a ton of good. It’s sort of trite but true to say it really could be benefitting people and nature at large magnitudes,” said Beck.

As testament, when the team released their initial report to Lloyds in October 2016, the precursor to their journal publication, by December its abstract had appeared in a White House policy document. Beck explained the White House didn’t credit The Nature Conservancy or SNAPP – rather, it referenced it as a “study by Lloyds,” which, to him, said it all, implying the extra muscle that is in a message from a global insurance company, compared to that of a conservation organization.

To Franco, who was instrumental in helping the team initially catch Lloyd’s attention, their efforts to provide the risk sector with data they can incorporate into their models is the “right approach” to building bridges and a common language between insurance and conservation.

“I hope that, in the next phase of our collaboration, we end up developing some strong datasets that we can apply on a standard basis in our tools, so this knowledge becomes standard within our processes,” said Franco. “That is critical to make sure we bridge this gap fully.”

Indeed, the team is pursuing more funding to move into that next phase, to supplement risk models with more data on the financial benefits of other coastal ecosystems in other geographic locations, like mangroves in Florida, and ultimately make assessing their specific value standard in risk reduction modeling.

And as communities rebuild from this summer’s storms, Narayan hopes their research can galvanize such efforts, broadening the options for reducing risks to include wetlands and other habitats as frontline defenses against the next storm. Before he began this work, thinking of nature as a form of protection was as new to him as the idea of financing its conservation through insurance.

“There are so many different ways we can approach the problems of both conservation and risk reduction. It’s been eye-opening to realize what those approaches can be,” he said.

Can We Save the Olympia Oyster by Eating It?