To create a shoreline that reduces erosion while providing habitat for everything from shorebirds to horseshoe crabs, sometimes nature could use a helping hand. Enter engineers and conservationists.

During a raging spring downpour, scientists from the Conservancy, ecologists and engineers from CH2M, and wildlife refuge managers from the U.S. Fish and Wildlife Service (USFWS) assessed the Narrow River’s degrading shoreline.

Shorebirds, marsh wrens, and horseshoe crabs carried on as though it were any other day, unaware that the boatload of humans working their way through the estuary—despite the weather—were on a serious mission: to figure out a way to give nature a chance. By installing natural infrastructure, they hoped to limit accelerated marsh erosion caused by boat wakes, sea level rise, and other factors. 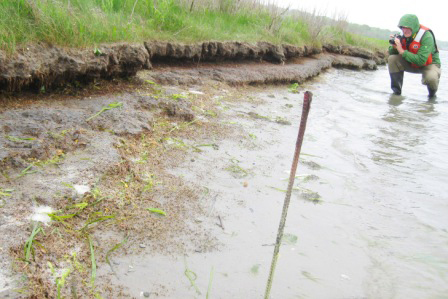 In comes the Conservancy’s Jeff DeQuattro, Director of Restoration for the Gulf of Mexico Program, who manages multiple shoreline and oyster restoration projects in Alabama, including the $3 million Recovery Act project to restore 1.5 mile of oyster reef at Mobile Bay. After working with CH2M engineers and scientists on an 8-mile living shoreline project in Pensacola Bay, Florida, DeQuattro encouraged Scott Comings, Associate State Director for the Conservancy’s Rhode Island chapter, along with his Narrow River team, to engage engineering ingenuity. CH2M also recently helped the Conservancy protect the Gulf of Mexico coastline by designing and installing precast oyster castle reef units in Arlington Cove. Using hybrid green infrastructure solutions that are built to last while reducing wave energy, the project encourages marsh regrowth and beach stability, while providing sea life habitat. In addition to helping design the reef, CH2M engineers and scientists helped coordinate the five volunteer teams who built the structure. 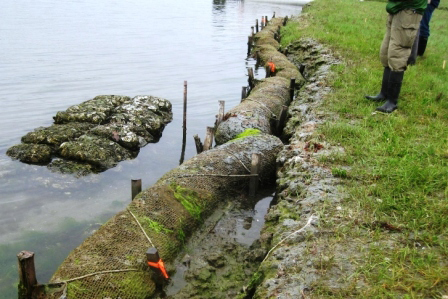 Fortunately, the collaborative agreement between the Conservancy and CH2M made it easy to tap into an engineering brain trust. It all started with a few phone calls. Then, understanding the project’s budget limitations, CH2M and vendor personnel visited the area on a Sunday, off work hours. Next, the scientists, engineers, and agency stakeholders met onsite on June 1, 2015 to consider new possibilities. After the site visit, the CH2M team facilitated a workshop to identify what success means for this site and for the Conservancy, USFWS, and the regulatory community. This is what all of the team members have learned in the process: 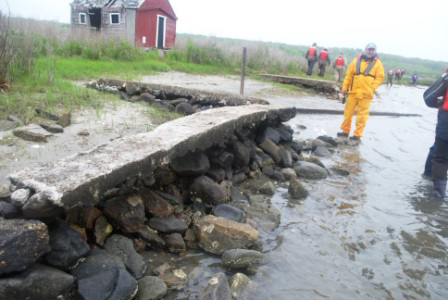 During the workshop with agency partners, permitting agencies, vendors, and interested parties, everyone had an opportunity to weigh in on what success looks like. After looking at examples of green, grey, and hybrid projects, the group rolled up their sleeves and worked through a list of a dozen criteria, from durability and habitat creation to ongoing maintenance.

For example, if project success is defined by durability in the face of hurricanes, the approach would involve robust, hard-engineered solutions that require heavy equipment for installation. However, if the success is defined in terms of resiliency, or the ability to easily recover after a disturbance, the door opens to a more natural hybrid solution using human-scale labor. Similar to Arlington Cove, a project can be designed with volunteers in mind. In the case of Narrow River, if the project is designed to be enhanced and maintained over time by people who care deeply about the estuary, then the project could be implemented incrementally as funding allows. It could create a platform for engaging and educating the community on the health and protection of their living shoreline.

“That workshop was so important because it pulled all the rats out of the woodpile,” said Comings. “We set the parameters for what can and can’t be done. Although there were not a lot of huge surprises, we got it all on the table.”

While the stakeholders discussed their values and outcomes through the lens of the criteria for success, they had some “aha moments” about what is a sustainable solution. For example, one vendor suggested a plastic mesh cage that could contain the oyster shells and last two decades, but most preferred natural shell bags that last only a few years. This led to a fruitful discussion of what is sustainable. Is it durability, or biodegradability? As Jaworski said, “Given the constraints, goals, and opportunities, our goal isn’t to find the one ‘right’ solution, but rather to rethink things in a way to emphasize resiliency yet incorporate flexibility.”

This collaboration between scientists and engineers is helping the team develop the best whole systems solution for Narrow River’s ecosystem. As the team develops a list of possible solutions at different locations in the estuary that could deliver the outcomes needed, they are inspired by the synergy that results from combining these two different cultures and approaches. Jaworski commented, “Since we’ve been up there, everyone, including USFWS, has been pulling together with all the right ingredients—excellent knowledge, great science and engineering, and most of all, people who care.”

Scott Comings agreed, “Both of our site visits took place in pouring rain. That sticks in my mind because they were among the few days of rain we’ve had. But the bad weather did not matter. It speaks to how strongly we believe in this work. All three of us—the Conservancy, USFWS, and CH2M—will deliver together no matter what the conditions are.”