Ming and the Nanoscavengers sounds like it might be the title of the latest runaway summer sci fi hit at the neighborhood multiplex. And in a way, the story of NatureNet Science Fellow Mingliang Zhang has all the elements of a potential blockbuster featuring a brilliant, engaging protagonist who uses advanced science and engineering in a quest to save the world.

Of course, the great thing about the story of Ming and the Nanoscavengers is that every word of it is true, and the special effects, courtesy of nanotechnology, are real.

And in a world facing unprecedented challenges from climate change, as well as ever increasing demands for food, water and energy, we need all the real, effective science we can get. For Ming, who is working on his NatureNet Fellowship at the University of Pennsylvania, his quest to revolutionize water purification has life or death stakes that play out on a global scale every day.

The numbers, he says, paint a pretty clear picture of the problem: 1.2 billion people lack access to safe drinking water, and nearly 4,000 children die from water-related diseases every day. It’s a problem with many causes and no easy solutions.

In terms of access to safe drinking water, “some areas,” Ming notes, “lack water treatment facilities altogether either because of cost or other economic challenges. Some areas have water, but it is unhealthy” for human consumption – usually because of contamination from things like heavy metals, nutrients, bacteria, parasites and other contaminants.

One potential solution: a portable, inexpensive, reusable and highly effective way for people to purify water and make it safe at the point of use.

A Reusable Water Bottle with a Star Trek Twist

Ming is using his NatureNet Science Fellowship to continue development of a project he started with colleagues during his Ph.D. work in materials science and engineering at Stanford: “a point-of-use system [like a water bottle] that uses nanotechnology to remove contaminants from the water, so each person [could] carry their own system for water purification.”

It might help to think of it as a kind of reusable water bottle with a Star Trek twist.

Put simply, Ming’s point-of-use water purification system uses magnetic nanoparticles that, when dispersed, essentially move through water to “scavenge” for targeted contaminants. Once the nanoscavengers have done their work, says Ming, “we use a magnet to collect [them].” Then, he explains, “we have clean, safe drinking water” in one part of the bottle; and in another part, the bottle stores “the recollected [nanoscavengers] that have been removed from the water so they can be used over and over again.”

“The recyclability of the [nanoscavengers] not only greatly reduces the cost of the system,” notes Ming. “They also cause no secondary contamination to the environment, making the system sustainable.”

Right now, Ming’s prototype uses nanoscavengers coated in silver (Ag) to kill bacteria. But, he says, “we still need to incorporate different materials to treat different types of contaminants [like heavy metals, nutrients, and parasites] and there’s a long way to go to achieve the goal of treating all kinds of different micropollutants in the same [bottle] at the same time and finish the process in a fairly short amount of time. We also need to be able to make it affordable.”

But given the speed with which nanotechnology is evolving – a field he himself is helping to advance with his work on nanoscavengers, Ming is hopeful these challenges will be met within a few short years.

In addition to its benefits for improving health for individuals, one of the exciting things about Ming’s work is also its potential to contribute to the development of future nanotechnologies that could possibly purify water at larger and larger scales. As many of the world’s rivers and lakes suffer from nutrient runoff and our oceans bloom with Dead Zones, finding ways to remove contaminants is an urgent conservation need. 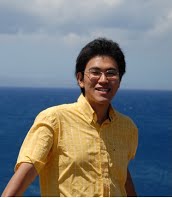 For Ming, finding opportunities to use nanotechnology to solve environmental challenges is important to him both professionally and personally.

One of the reasons he sought a NatureNet Science Fellowship, he says, was because of its emphasis on applied science to solve real world problems. “I’m a technology person,” he says, “so I definitely [want those connections] to environmental people to find out what they care about, and what I can offer to tackle their problems. Working with The Nature Conservancy is a perfect match for that.”

He also wanted his work to solve problems close to home. “I’m from China,” he says, “and right now China is developing really fast, but the problem that comes with the fast development is the consumption of the environment, like the pollution of water, rivers and lakes. The problem is getting more and more serious. And people [are taking] much more care about those water issues, like my family and my friends, and I want to spend my time solving these problems, too.”

Our world faces unprecedented demands for food, water and energy — and meeting these demands without exacerbating climate change and degrading natural systems is the human challenge of our generation. That’s why the Conservancy has established the NatureNet Science Fellows Program in partnership with six of the world’s leading universities — Columbia, Cornell, Princeton, Stanford, the University of Pennsylvania, and Yale — to create a reservoir of new interdisciplinary science talent that will carry out the new work of conservation, from rainforests to storm drains to laboratories, and everywhere in between.