A popular trend in nonfiction books is to take a plant (say, a crop like the potato) or an animal and use it to illustrate larger themes of human history.

This can be an interesting approach with, say, corn or cod. But cormorants?

Cormorants are a family of aquatic birds found around the globe. In North America, their numbers have been growing – making them an easy bird for observe along coasts and lakeshores. But, at best, people ignore them.

Often, people find them ugly and gluttonous. Their long necks are described as “snake like.” Many find their common pose – dead still, with wings outstretched – to symbolize something dark and ominous.

So, one wonders, what can such a bird teach us about human relationships with the natural world.

Plenty, author Richard J. King argues in his book, The Devil’s Cormorant. Despite the subtitle, this is a work as much about human history and values, as it is about nature.

King explores the ways the lives of cormorants and humans have intersected through history.

Consider the cormorant as commodity: Its guano once fueled economies.

Or the cormorant as hunting partner: In Japan, an ancient tradition involves training cormorants to catch fish for human consumption. It may be an obscure interaction, all the more so because it is one of the few instances where humans revere the birds.

And even conservationists often view the cormorant with ambivalence: In some instances, cormorants are killed to save another species, like salmon.

King spends time with the people and cormorants in all these situations, and more. What he finds often has very little to do with science and very much to do with human values, prejudice and desires.

We seldom see cormorants. We see instead symbols, myths, projections of ourselves.

When King visits a fishing guide who has taken the (illegal) action of destroying a cormorant colony, the man describes a bird that is to real cormorants what Winnie-the-Pooh is to real bears.

While this is undoubtedly a specialized book – more appealing to birders and bird conservationists – King does an exemplary job of exploring how human notions impact how we see wild things.

This is true of cormorants. It is equally true of bison and zebra mussels, sage grouse and rhinos, wolves and white-tailed deer. And many more.

These are real, breathing creatures. Their realities, though, are often lost amidst human projections, politics and ideologies. We lose the creature and substitute a symbol.

King sees past the symbol and presents the real cormorant, living amidst real people. And one is left with this conclusion: Surely we need animals as symbols. But let’s not allow it to obscure the real, complicated, beautiful creatures among us. 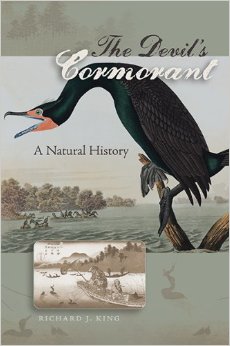