Review: Relicts of a Beautiful Sea

Relicts of a Beautiful Sea: Survival, Extinction and Conservation in a Desert World. By Christopher Norment. The University of North Carolina Press, 2014. 271 pages.

Consider the pupfish: A “freshwater” species that survives in Death Valley, one of the harshest environments on the planet.

A creature that has seen its lake home dry up into tiny pockets, and still manages to survive and even thrive.

A fish that swims in water so hot and salty that it would turn even a carp belly up in minutes.

I peer into Salt River and see these beautiful little fish darting around, and I’m an instant pupfish fan. How couldn’t you love such a creature, such a survivor?

Not everyone shares my enthusiasm, as certain cable news commentators are quick to remind me, as they rant about “worthless” endangered species. Like the pupfish.

I know well the rhetorical questions those commentators will pose to viewers: Why should a tiny, obscure, unknown animal that no one will ever see stop economic development? Shouldn’t we care more about farmers than fish? Families than fish? Would anyone notice if a knuckle-sized fish living in the desert disappeared? Don’t we have more important issues to worry about?

I’m at first tempted to laugh at the ridiculous simplicity of their arguments. Then I realize that such commentary – even when delivered by someone with the charisma of a rabid badger – resonates with most folks more than anything I can offer.

A knuckle-sized fish? Who cares?

Christopher Norment’s Relicts of a Beautiful Sea is a lyrical attempt to answer that question, and more.

Norment, a professor of environmental science and at the College of Brockport, State University of New York, travels to the Great Basin to encounter the desert’s most unusual survivors, including four species of pupfish and two amphibians.

He delves deep into the area’s geologic history and the species’ evolutionary history to tell a remarkable story of survival against the odds. Once, this harsh desert was covered by water.

When those waters receded and eventually disappeared, aquatic creatures were isolated into little springs and creeks – essentially watery islands in the desert. And as with any island, species evolve rapidly to fit the new conditions.

As the Conservancy’s Dave Livermore tells the author, the desert spring complex is “in its own way as magnificent as the Galapagos Islands, in terms of its biodiversity and importance for understanding evolutionary processes.”

On one level, this is  an entertaining book of biological exploration. Norment snorkels into Devil’s Hole to encounter the Devil’s Hole pupfish, the vertebrate species with the most limited range on earth. He camps and hikes and sticks his face in the water, encountering rare critters up close and personal. It’s perfect for wildlife nerds like me.

But it’s more. Many of these animals are in serious trouble. When species are isolated on small islands, it makes them very vulnerable to disturbance. In this case, dramatic human disturbance.

At first glance, the desert may be only slightly more inviting to people than pupfish. But people move there anyway, building cities and casinos and farms. And using water. Lots of water.

All that development and water use brought a wave of biological loss; Norment meticulously details species that have evolved over hundreds of millions of years only to be wiped out by an ill-considered development.

Other creatures, though, are rescued from almost certain doom, thanks to last-second heroics by visionary individuals and organizations (including The Nature Conservancy).

Norment bring a scientist’s observational skills and attention to detail to the topic, but conveys that information with a creative writer’s grasp of language.

I first became familiar with his work in Return to Warden’s Grove, a narrative about Norment’s research on nesting sparrows in the Arctic.

Conducting wildlife studies in a remote locale is an interesting subject in its own right, but Norment went farther afield: he takes on bigger themes like solitude and movement and even killing creatures in the name of science. It makes Warden’s Grove one of the most compelling accounts of field research I’ve read.

Relicts of a Beautiful Sea is even better, in part because Norment openly wrestles with that looming question about pupfish and other obscure creatures: What good are they?

Among conservationists, the debate between “nature for its own sake” and “nature for people” has become tiring, if not tiresome. It’s difficult to find fresh perspectives in arguments that can be so acrimonious. So often, it’s a needless argument — we’re all trying to find the best way to protect nature. But what about those small, overlooked, inconvenient creatures?

In Relicts, Norment offers a fresh take on the subject, using pupfish and desert amphibians as a focal point. Any economic or “ecosystems services” argument for these animals feels, at best, contrived.

So why care? Norment finds many people who don’t, like the waitress at a hot spring that was once home to an extinct fish species. When he asks her about them, she answers, “’I think they were pretty tiny, not good for much of anything. You couldn’t eat them. Not like trout.”

Norment listens to those who with similar opinions, as he attempts a response. His goal with the book:

“I have read the technical papers and taken what stories I could from their numbers. I believe, passionately, that it is possible to use the particulars of metabolic rates, premaxillary bones, dehydration tolerance, osmotic regulation, mitochondrial DNA, and growth rates – mostly the adaptive outcomes of evolutionary processes – to help craft an aesthetic and ethical argument for the conservation and appreciation (or say it: love) of rare and beleaguered species everywhere.”

Norment looks to the perseverance of desert creatures as a source of inspiration and strength in the face of human tragedy. He ponders the isolation of pupfish against his own feelings of loneliness.

It’s a beautiful, thoughtful argument for why these creatures matter to us, and matter deeply. I’m tempted to quote numerous passages, and even whole pages, but here’s a taste:

“For all of us, at some time or another, this can be a dogsh** world, unbelieveably cruel and sorrowful and painful. I do not pretend to know much about dealing with the adversity that strikes us all, sometimes with a force that dwarfs anything I have experienced. I have nothing to suggest by way of easy pop-psychology remedies; I would never be so arrogant or condescending. But I will say this: that in my own life I have been consoled and heartened by the strength of pupfish and salamanders, in spite of their otherness, and the 300 million years or more of time that separates my evolutionary lineage from theirs. I value these creatures for their own sake, but also for the ways in which they reassure and comfort me.”

Read this book for its biology – it’s field science writing at its best. But read it too for the conservation argument – of how science and values and story can help us better defend wild places and wildlife.

Even when that wildlife is a knuckle-sized fish in a tiny desert pool. 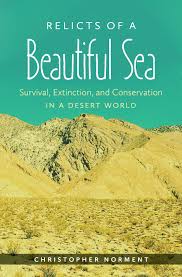