An Indomitable Beast: The Remarkable Journey of the Jaguar. By Alan Rabinowitz. Island Press, 2014. 241 pages.

I admit that when I booked a trip to search for wild jaguars, I came with low expectations. I figured I’d see capybaras and caimans and birds, and that would be more than good enough.

That proved not to be the case, as the accompanying photo – of a wild jaguar from that trip – attests. In the right place, at the right time, you can actually spot a jaguar. I did, and it wasn’t all that difficult.

But even when you see a jaguar, the big cat gives off an aura: of secrecy, of stealth, of elusiveness. As if it is capable of disappearing into the background at any moment. As it often does.

Perhaps that’s why jaguars have fared much better into the 21st century than lions and tigers. While the jaguar faces daunting challenges, those challenges still seem quite solvable compared to the issues facing many other large species.

This is the animal that Alan Rabinowitz, CEO of the conservation organization Panthera and a former biologist with the Wildlife Conservation Society,  ponders in his highly readable new release, An Indomitable Beast. The story of the animal is indeed remarkable, but equally so is the author’s own scientific and intellectually journey.

As a child, Alan Rabinowitz suffered a debilitating stutter, leaving him frustrated as he failed to express himself to others.

Unable to converse openly, he turned to the pets he kept in his bedroom closet – and to a jaguar in the Big Cat House at the Bronx Zoo.

These encounters propelled Rabinowitz to a career as a biologist. While working in the Smoky Mountains, a meeting with legendary conservationist George Schaller led to an assignment in Belize, where Rabinowitz set up the world’s first jaguar reserve.

That experience is chronicled in his 1986 book Jaguar. From there, he moved on to study cats and create reserves on other continents, and chronicled his adventures in popular books like Chasing the Dragon’s Tail and Beyond the Last Village.

Reading these excellent books I felt inspired by his consuming drive to conserve wildlife in remote, difficult places. Always, in the background, was this sense that here was a man who had worked relentlessly hard to overcome past demons, and was putting this energy to a noble cause.

On the other hand, Rabinowitz was brutally honest in these books. This was not Indiana Jones, cheerfully facing all obstacles. He could be impatient, irritable and unyielding. While I admired his passion and accomplishments, I also admit that he probably wouldn’t be someone I’d invite along on a camping trip.

It’s tempting to say that An Indomitable Beast presents a kinder, gentler Rabinowitz. But that’s not right. Not quite. What we have here is a portrait of a dedicated scientist – one who can admit when he’s wrong.

With his usual vigor, he presents a compelling tale of how the jaguar has survived through almost unimaginably harsh conditions over time. This includes migrating from Asia into North America, and working its way south.

It survived the Pleistocene extinctions. It seems to survive better than other big cats in the face of humanity.

Why? Rabinowitz looks closely at the threats facing jaguars and also what factors might aid in its conservation. He admits that he viewed humans as enemies of the jaguar. Period.

“In Belize, where I first worked closely with the jaguar, I viewed people who lived among the jaguars mostly as antagonists to the animal’s survival and my own conservation efforts. At best, I thought, humans took away the jaguar’s land and consumed its needed prey. At worst, they hunted the jaguar for trophies, for sport, or out of fear that the animal threatened them or their livelihoods.”

Rabinowitz’s latest large-scale conservation project, called the Jaguar Corridor Initiative, set out on an ambitious path to link jaguar populations in protected areas. Rabinowitz believed that jaguars were currently isolated here and there in reserves and parks.

But genetic research revealed a different story. “I was confronted with a scenario that completely contradicted my assumptions,” writes Rabinowitz.

The research revealed that jaguars were already using corridors – working ranches, small patches of forest, riversides that ran near cities. The jaguar was much more resilient than even Rabinowitz believed. That stealth, that secrecy, had served it well.

The threats remain significant, but conserving the Jaguar Corridor now means working with people, not viewing them as antagonists.

“The jaguar corridor, if handled properly, demonstrated how people and predators, development and conservation, could for the most part coexist,” he writes.

And he believed listing would endanger the livelihoods of area ranchers, many of them key figures in protecting both open space and the existing jaguars. It’s this rigor, in biology and conservation, that makes Rabinowitz such an important conservation biologist.

This book does so many things well. It is full of adventure and cool biology and human history, but it also succeeds as a scientific memoir and journey of intellectual growth.

I read everything Rabinowitz writes – he is a gifted storyteller and accomplished researcher. I recommend all his books. This is his best.

It’s hard to read this book and not reach the conclusion that the jaguar is flat-out one of the coolest animals to walk this planet. And there’s no one better to tell its story than Alan Rabinowitz. 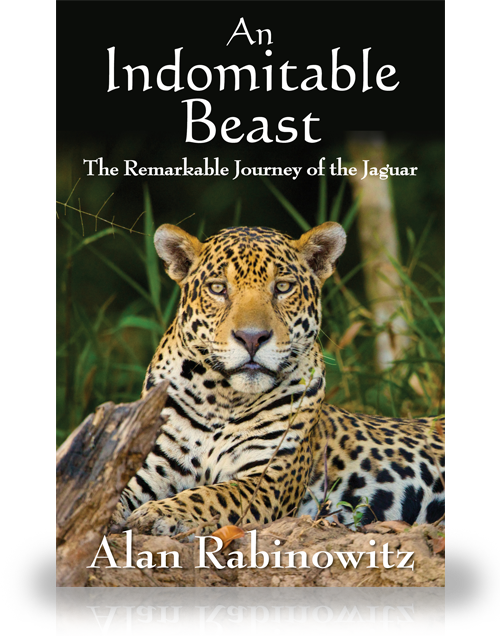