Through the lens of a the famous 1980 wager between ecologist Paul Ehrlich and economist Julian Simon, Paul Sabin projects the successes and the foibles of the 20th century environmental movement onto the screen of the larger political culture.

He covers a half century of prescient cautions mixed with overwrought doomsaying; naïve faith in technological progress tempered with uncommon empathy for the disadvantaged.

If you’re looking for a careful analysis of the bet itself, you’ll have to be patient. It doesn’t appear until the last quarter of the book.

The $1000 wager between Ehrlich (of Population Bomb fame) and Simon, a professor of business administration and economics — on the price of five commodity metals over the decade from 1980-1990 — was intended to resolve a smoldering debate about the importance of physical resource limits for human well-being.

If prices went up, it was evidence of scarcity at work.

If they went down, it would represent the power of technological ingenuity and markets to find substitutes.

As it turned out, prices went down, but the outcome proved little. Most other starting points they could have chosen would have yielded a different outcome.

The bet, it’s clear, is merely a device to focus Sabin’s exhaustive research on the personalities and issues involved. Stubbornness, ego, and unwavering commitment take center stage as Sabin recounts many incidents in which political theater and personal obstinacy buried any opportunity to reconcile the two views.

Whether the reader is more sympathetic to the views of Ehrlich or Simon, it is hard to read the book without mourning the decades of potential progress lost to what comes across as rigid posturing.

Sabin sets up this kind of rivalry as a symptom — if not the cause — of our deeply polarized political culture. There’s truth in that linkage, of course, but it also pays to remember how far we’ve come from the days of burning rivers, sulfurous smog, and unquestioning acceptance of DDT. 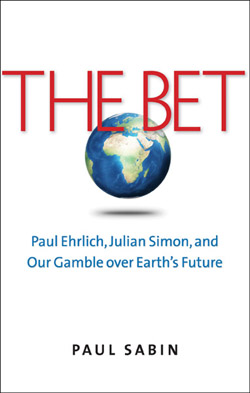 Outrage and political theater are not, themselves, solutions. But we can see that far better in hindsight than in the 60’s and 70’s when we seemed to be racing heedlessly toward annihilation.

The book (which I listened to, rather than read) left me looking backwards with a sense of embarrassment mixed with affection – as when recalling some cocky young version of myself.

And it gave me far greater sympathy for the view that climate predictions are just the latest in a series of dire environmental warnings. The frequency of such warnings doesn’t make them less true or valid — but it’s easier to see how it could feel that way.