Yesterday, a moose made an appearance along a popular biking and running path near my home in Boise, Idaho.

I would have guessed that this would not be a huge surprise to my Idaho neighbors. After all, many of us cite “abundant wildlife” as one of the reasons we live here. Deer are a regular sight along this path, as are coyotes and beavers and even elk.

But not moose. And the breathless accounts in local media might lead one to believe that the city was under assault by Moose-zilla. The path was closed. Warnings issued. Businesses closed. The moose tranquilized and moved to the less-populated foothills.

If we can’t rationally deal with a wandering moose, what hope do we really have of living with large, wide-ranging carnivores? After all, wolves and grizzlies eat livestock and pets, and, sometimes, yes, people.

Unfortunately, the topic of large predators can draw plenty of passion and emotion, but that often leaves little room for clear thinking. That’s why Cristina Eisenberg’s The Carnivore Way is so refreshing. It brings science and rational thought to the issue and shows that we can indeed coexist with large, carnivorous animals – and that most of the issue is with us, not them.

Eisenberg is the perfect scientist to write this book. She lives in a Montana cabin where she encounters the predators of which she writes: wolves, mountain lions, grizzly bears, lynx. In fact, it was a chance encounter with wolves on her newly-purchased property that led her to graduate school.

She studied the trophic cascades – the top-down effects exerted by wolves on the environment – and has written a book on that complex subject, The Wolf’s Tooth.

Her own research and review of the literature leave her convinced that large predators are essential for landscape health, and vital for our own values of wildness and wonder. She knows that these animals also need large, wild, remote lands – and that a series of such lands exists in western North America from Mexico to the Arctic, with the Rocky Mountains serving as the centerpiece.

She lays out a blueprint for how we can keep these lands wild and connected. She addresses the challenge faced by each species – roads, climate change, poor management – and uses the science to argue for better conservation. Through it all, she weaves her personal story, making for a compelling narrative.

Most importantly, she takes into account the human element. If people can’t learn to live with grizzlies or recognize the need for wolverines, these animals have little hope. How to survive with animals that are big and sometimes troublesome?

It’s easy to tell people how to live from afar, after all. This becomes painfully obvious to me as I advocate for wolves while at the same time feeling rage when raccoons kill my pet chickens, as happened last week. How can I expect a rancher to live with predators killing his stock if I can’t tolerate some neighborhood raccoons?

Fortunately, Eisenberg is up to the task here. She has compassion for the people who live and work in predator country. She’s a hunter. She’s lived and worked on ranches. And she has read and studied and put miles on her boots. She shows that we can adapt to living with the predators. 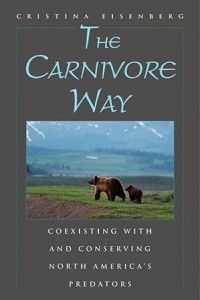 Will it require us to alter our ways? Of course. Will there still be messy edges, and will we sometimes have to make tough decisions? Undoubtedly.

But minor modifications could ensure that jaguars and lynx and grizzlies and other awesome beasts remain a part of our wildlands –and our culture – for generations to come. Overcoming our prejudices and hysteria may not be easy – witness the business-closing moose – but it’s a worthwhile effort. And Eisenberg is a level-headed guide – passionate about predators but with her eyes firmly on the science.