Two years ago, a colleague and I — like many other scientists and policymakers — were trying to understand how something like climate change might affect municipal water supplies globally. But without a consistent global database of urban water sources, we couldn’t get very far. No such database existed at the time and — after complaining about that for a while — we decided we should just build it ourselves.

We’ve recently finished assembling the first version of what we came to call the City Water Map (CWM, incidentally, is also a real word, one of my favorites). With financial help from the Socio-Environmental Synthesis Center (SESYNC), the Moore Foundation, and advice from our TNC-California colleagues, our international team of scientists mapped the water sources of more than 500 cities globally, providing the first global look at the water infrastructure that serves the world’s large cities.

Water Travels Long Distances to Get to Cities

That infrastructure is staggeringly large. We estimate that globally cities move 504 billion liters a distance of 27,000 kilometers every day. Laid end to end, all those canals and pipes would stretch halfway around the world (and that’s not counting the many small pipes that move water within cities).

Many cities move water a surprisingly large distance, crossing watershed boundaries. My favorite quirky example is Johannesburg, South Africa, which ultimately gets water from another country — Lesotho, moves it through a tunnel under the mountains, dumps it in the Vaal River, and then eventually extracts it for use in the city.

Many analyses are in the works using the CWM, including a study of climate change impacts and a quantification of how source watershed protection can reduce the costs of water treatment for cities globally. Our first paper was just released today in the journal Global Environmental Change [insert link], and provides the first global picture of urban water scarcity that takes water infrastructure into account.

We combined the CWM with three global hydrologic models that estimated water use and availability for surface groundwater. We found — perhaps not surprisingly — that infrastructure often matters to whether a city experiences water scarcity or not. Cities often build themselves out of water scarcity, and previous global studies (including some of my own) that ignored long distance water transfers were overestimating urban water scarcity.

Nevertheless, even with urban infrastructure accounted for, we find that one in four cities, containing $4.8±0.7 trillion in economic activity, remain water stressed — defined here as using at least 40% of the available water. The top 20 biggest cities in water scarcity (see Table 1 below) span the globe, and a variety of contexts. Some are in developed countries (Los Angeles) and some are in developing countries (Delhi). Some use surface water sources (Tokyo) and some use groundwater sources (Mexico City). 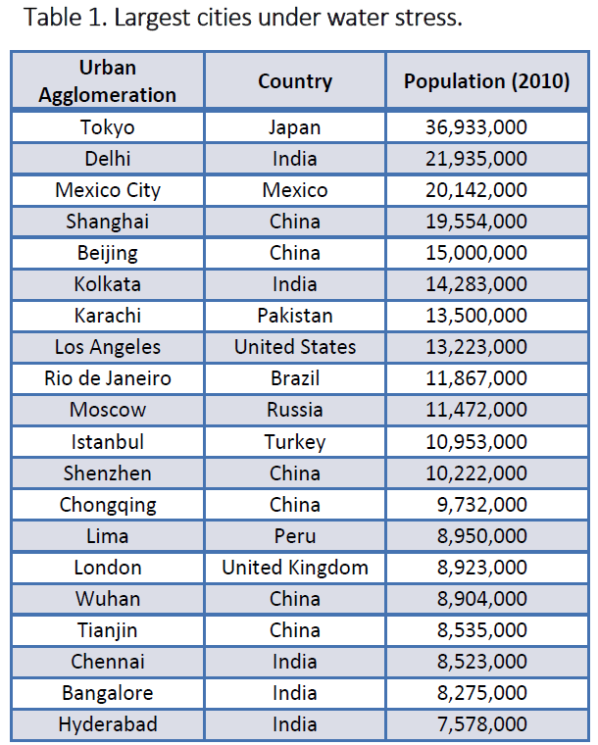 Despite this variety, two main risk factors are clear in the data. First, some drier parts of the world simply have very little water relative to human demands. This geographical limitation puts cities more at risk for water scarcity, which they often try to overcome by transporting water even longer distances.

Second, poorer cities are more likely to be water stressed because they don’t go out as far for water, presumably because their finances limit infrastructure construction.

Some cities are unlucky enough to have both risk factors, and get stuck in a low-resources trap. They would have to go out quite far to get sufficient quantities of surface water (or resort to something expensive like desalination), and yet they don’t have the resources to do it. Sana’a, Yemen is probably the most extreme example of this trend — an extremely poor city, in an extremely arid climate, with political instability to boot. Cities stuck in this low-resource trap may need significant aid from the international community to build sufficient water infrastructure to serve their citizens.

Our research also shows the great race that the fast-growing cities of the least developed countries are in. The poorest cities have the least water infrastructure and thus significant problems with water scarcity. The poorest cities also have, statistically, the fastest population growth.

Urban growth and the concentration of people in cities has tended throughout history to be associated with industrial development. Rapid growth in developing countries will likely also bring with it economic development, and thus create new wealth that can help finance the construction of water infrastructure. But population growth and economic development both increase demand for water. The poorest cities find themselves in a real race to build water infrastructure to keep up with the demands of their rapidly growing citizenry.

Rebalancing Water and Land Use for Nature and People in California