The Atchafalaya River Basin: The Future of Nature?

Louisiana’s Atchafalaya River Basin (ARB) — home of the reality TV show “Swamp People,” safety valve for the swollen Mississippi River, and one of the richest and most fascinating natural places in North America — might finally have met its match…in Conservancy scientist Bryan Piazza’s new book about it.

The Atchafalaya River Basin: History and Ecology of an American Wetland (Texas A&M Press) is Piazza’s beautiful new synthesis of more than 300 contemporary and historic scientific studies of the ARB. Beautiful as science, and as a book — bursting with dozens of maps, graphics and photos that capture the astonishing biodiversity, from alligators to river shrimp.

And equally compelling is the story that emerges of the Basin as a dynamic avatar of the future — a nexus of human and natural systems that’s both managed and wild at once.

I called up Piazza, the director of freshwater and marine science for The Nature Conservancy’s Louisiana program, to talk with him about his 20-year-long love affair with the ARB, what the Basin can teach the rest of us — and to find out once and for all if it’s pronounced “crawfish” or “crayfish.”  (And read more on what Piazza loves about the Basin on our sister blog, Conservancy Talk.) 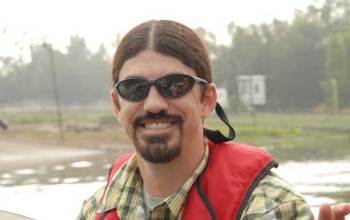 Bryan’s work focuses on developing and implementing freshwater and coastal science to support conservation and restoration both in Louisiana and in collaboration with other Conservancy programs (Gulf of Mexico, Global Marine Team, Great Rivers Partnership). He also enjoys engaging graduate students in conservation issues.  Bryan serves as adjunct assistant professor in the School of Renewable Natural Resources at Louisiana State University, where he teaches a course on environmental decision making.

South-central Louisiana, where the Atchafalaya River starts at the confluence of the Red River and the Mississippi River. At that location is the Old River Control Structure, which a lot of people know of, because it’s sort of an engineering marvel. The basin is about 1 million acres now — it used to be about 3 million. It’s got about 850,000 acres of forested wetlands and about 150,000 acres of delta marsh.

Some days we’ll put the boat in, and we’ll drive 3, 4 hours in a boat and never see a person, not another boat — or maybe one.

When I was working on my master’s degree here in 1993, I’d just drive my boat 40 minutes out into the middle of the wetlands, and then I’d just live there, working on my project — which was studying the nesting dynamics of colonial wading birds. I’d also help my buddies on fish projects — we’d spend all night tracking spotted gar when the river would rise, and they would go into the woods and we’d try to find them with radio telemetry. I’d stay out there until I absolutely had to come back to Baton Rouge.

I feel like it’s one of my oldest friends. It never gets old to me, even after 20 years working here. Every time I get in my boat and I get out in that system, it keys me down. No matter how much I got going on at work or at home or whatever I’ve got on my mind — I say my anxiety is going in the opposite direction of my tachometer, because my tach is going forward, and my anxiety is coming down. I love it.

Q: What surprised me about your book is that this place is such a nature hybrid — it’s like the future of nature. It’s one of the most biodiverse places in North America. But it’s also one of the most engineered landscapes in the world — canals, levees, the Old River Control Structure, not to mention it’s an incredibly important floodway for the Mississippi River. And you’ve got all sorts of human activity, hunting and fishing and the Gulf Intercoastal Waterway — not to mention “Swamp People.” How did it get this way?

It started after the disastrous Mississippi River flood of 1927, when the U.S. Congress said “this will not happen again.” That’s when the Mississippi River began being leveed in earnest, all the way from Cairo, Illinois to the Gulf of Mexico.

But what’s unique is that, in spite of all the engineering that’s gone on in the system — all the oil and gas exploration, all the logging that’s gone on in here, all the canal building, all the levees and things — this place is still 1 million acres of continuous, unbroken wetland habitat. It’s so engineered, but yet at the same time so wild.

Not only do we have viable commercial fishing, but people still live off the land here. “Swamp People” has made it popular — I think there are three different reality shows that take place in the Atchafalaya Basin. But there aren’t many places in the United States where a person can still live off of hunting, trapping, frogging, crawfishing and fishing, and this is one of those places. And it’s the heartbeat of Acadiana. There are several great books written about Cajun culture’s roots in the Basin.

Q: It’s really wild. The sheer numbers and diversity of species you document in the book — everything from river shrimp to warblers, paddlefish to Louisiana black bear — are jaw-dropping. Why is this system so immensely productive?

It’s driven by this river/floodplain interaction. Think about what ends up down here every spring. Every spring the Mississippi and its tributaries all rise, taking all that snowmelt from 31 United States and two Canadian provinces. Then you add in the Red River, an important mid-continental drainage. All those nutrients, all that sediment and water coming down the Mississippi. And when it rises, it all spills over onto the floodplain into these forested wetlands, into these delta marshes, and that interaction is incredibly important for fertilizing trees, getting those marshes growing, putting all that nutrients into the plants and everything.

You get this food web that’s just unbelievable. Over 100 hundred species of fish and crustaceans. Over 300-some species of wildlife, about 250 of those are birds. It boggles my mind. That’s what’s driving this culture and this economy — wildlife watching, ecotourism, fishing, hunting.

Q: Why did you write this book?

I wanted to tell the Basin’s story through the lens of science. I reviewed somewhere over 300 studies of the Basin, going back all the way to the 1920s and going all the way to 2013 — fisheries, forestry, ecology, geology, social science. Nobody had ever told the story of the Basin that way — and there were general themes, no matter what the scientific discipline. If you look at other books on the Basin, they tell a very similar story.

Q: Without giving too much away, what is that story?

First, it’s about the Mississippi River, and the intimate link between the Mississippi and the Atchafalaya Basin that’s existed for the last 7,000 years. By that relationship and its very geological history, this place was destined to be biologically rich, if not richer. The geology of the basin is not only beautiful, but just amazing. I can’t even summarize it.

Second, the science shows that this system is not on a good trajectory. Stakeholders know that and they’re concerned about it, and they know something needs to be done differently.

And then the science presents definite opportunities to do restore the Basin. There are specific opportunities, prescribed by science, and people here are in agreement about what needs to be done. So it’s not all bad news.

Q: You say towards the end of the book: "The prevailing water management model in the ARB is damaging its living resources." Why is that? What's the alternative?

But that 70-30 split is an artifact. It wasn’t set by science — by looking at the system, the ecology, the fisheries, none of that. And discharges into the Mississippi and thus the Atchafalaya River have increased from the 1960s, so we see water levels rising in the Basin, which means we’re putting too much water into the system at certain times of the year and keeping it there for too long, so it can’t drain.

That problem is compounded by all the canals and levees and things that have been built for timber and oil extraction access. We have more water coming in, and that water has more difficulty getting out. And when water stays on land, particularly when it’s really hot out, all the oxygen gets used up in it and we develop mini dead zones inside the Basin. We’re seeing more and more of these, and they’re creating problems for the forests, fish, crawfish and other species that depend on them.

Q: OK, so what’s the solution?

The good news is that the science makes some definite prescriptions about what could be done at Old River to help.  And the state’s restoration program also has some good science-based projects designed and vetted by experts to address local flow barriers.  So we’ve got a great foundation. Now we all need to work together to get some of these things done on the ground. I’m excited by these opportunities — it’s going to be hard work, but I’m optimistic.”

Q: This is a gorgeous book — beautifully designed, with amazing photos and maps, and of course a lot of scientific synthesis. Who did you write this for?

First, I want this book to be on the shelf of every wetlands scientist and resource manager working in Louisiana and on the Gulf Coast, because I think it can help them in their jobs. If somebody goes, “Oh, I need to know about growth rates on the Wax Lake Delta. Let me find that.  Oh, yeah, here it is,” now they have a place to get it.

I also wrote it to help us move conservation and restoration forward in the Atchafalaya Basin.  That’s a very important reason. I wanted to summarize the science.  I wanted to get us on the same page.

Finally, I wanted to write this so that anyone who really loves knowledge and loves wetlands and loves rivers could appreciate this wonderful place. They don’t have to be scientists. They could love birds. To write something they could get into that told the story of the Basin with beautiful photos, so somebody could just pick this book up and look at it and just say, “God, those are beautiful photos, and maybe I’m going to read something about it and get interested in it.”

I got a note from a woman who bought this book for her husband. He’s a dentist, but he loves knowledge, and he loves the Atchafalaya Basin, and she said he hasn’t put the thing down since she brought it home last weekend. That made me really happy, because he’s not an ecology guy or anything, but he just loves to learn, and he’s into it.

You know me, Bob. I want to be putting ideas on the ground. I want to educate people so we can get the support we need to conserve and restore these kinds of systems.

Well, “crawfish.” Some will argue, but they are both accepted scientifically.  This book is about Louisiana, written about the heart of crawfish production, and it’s “crawfish” here, and so that’s why it’s “crawfish” in my book. It’s really very simple.

The other thing is just how much I appreciate and the gratitude I have to the great team of people around me at The Nature Conservancy that made this possible. While my name is on that book, this was a team effort. I could not have done it without all of you that have helped me throughout this process.