In 2010, I led an expedition to survey the biodiversity and forest use of the Mathews Mountains in northern Kenya (part of the Northern Rangelands Trust).

Among all the great things we found, some of the most exciting were from the camera traps that we installed on trails and overlooking clearings. These cameras operate autonomously – tie the trap to a tree, set it to video or still, adjust the sensitivity (amount of heat or movement detected) and leave it for the night.

These marvelous cameras give us a window into a world we normally never see: the animals that roam in the dark.

It was great fun to collect the cameras and download the photos. The results quite often disappointed. We’d “captured” a big insect, a blurry image, or nothing at all.

Occasionally we were rewarded with a stunner that evoked cries of joy or amazement from the crowd. The cameras gave us an insight into mostly nocturnal mammals that occur in the Mathews Mountains.

Here are some of my favorites:

A female bushbuck (Tragelaphus scriptus) creeping through a clearing (one of the few photos taken during the day). They are very seldom seen during the day and a very shy antelope.

Our cameras also captured video of a bushbuck at night.

This is a crested porcupine (Hystrix cristata) at a waterhole. It’s a very large nocturnal rodent (up to 60 pounds in weight), and has defensive quills that are very sharp and strong – to ward off carnivores that like to eat them.

What is interesting in the video, is that you can see the second porcupine sniffing the scent we left deliberately on the stone (to attract animals), and then rubbing its own scent glands on the stone.

Here’s an African civet (Civettictis civetta) on a trail. Civets are part of a unique mammal family called Viverridae and are closely related to cats; they are found throughout Africa and Asia.

Civets are nocturnal (sleeping in thick bushes during the day), and weight up to 40 pounds. They find prey with a super sensitive sense of smell and eat almost anything, including from small vertebrates, eggs, carrion,  poisonous insects (including millipedes) and snakes.

Spotted hyenas (Crocuta crocuta) are commonly found in the nearby savannas, but also range into the forests. They love carrion, and have incredibly powerful jaws that can break open and shatter bones, which performs a critical function of helping to recycle nutrients in African ecosystems. This hyena even sniffed around the video!

A leopard (Panthera pardus) also passed by a waterhole — close to where we were sleeping! This was one of a few leopards we caught on the cameras – they are usually very shy, solitary and nocturnal hunters (and very dangerous). We were fortunate to capture the same leopard on video.

And finally, an African lion (Panthera leo) peers at the camera! This was one of two lions captured in quick succession by the camera – and they had just destroyed another camera! The two lions were most likely brothers, prowling their forested territory, as reported by my colleague Sanjayan. 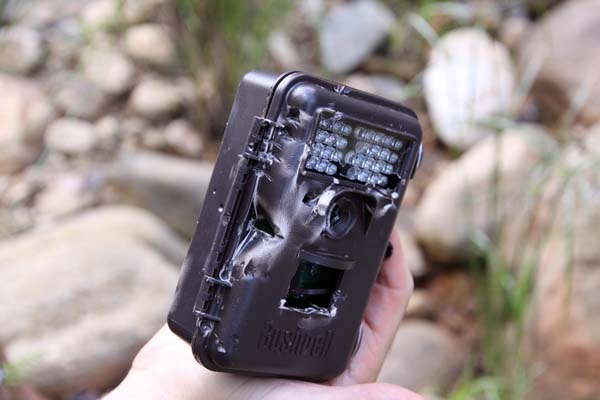 Here is the destroyed camera; it only took one or two bites to inflict massive damage. And didn’t make sleeping that night any easier (we camped on the same trail!).

Check out more photos from the expedition.