For millennia, Atlantic salmon made an annual appearance in Maine’s Penobscot River, swimming into its mouth from the ocean, surging as a crowd up its main-stem, and then scattering throughout its thickly forested basin to spawn in the cold gravels of its rivers and streams.

Then, 100 years ago, a series of hydropower dams were built on the river that blocked the salmon migration; their annual appearance nearly sputtered out. The salmon could make it past one dam — sometimes, when the flow was right — and maybe two. But three, four, and more dams proved too much.

And so, while a remnant population of salmon would return to the lower river, most of the basin had lost these magnificent visitors — culturally as well as ecologically important.

But recently, another creature has begun to make annual appearances in the Penobscot. And in a surprising example of symbiosis, their presence and activities appear likely to rejuvenate the Penobscot’s historic salmon run.

Each summer, they emerge from the forest, large and yellow. And with a shuffling, halting gait they work their way out into the river. With long swinging necks and a powerful head, they chip away and eventually tear apart the dams that have blocked the salmon.

No, brontosaurs along the Penobscot aren’t the latest Lazarus taxon to be discovered. But last summer, huge demolition machines rolled into the river and removed the Great Works Dam. And starting a few weeks ago, the machines began to take bites out of the Veazie Dam.

Upstream, two other dams will remain. But their antiquated (and generally ineffective) fish passage structures will be replaced with state-of-the-art solutions — one of which will be essentially a tumbling stream that meanders around the dam, connecting the river above and below.

After all of these projects are complete, salmon will have access to approximately 1,000 more miles of river and stream to spawn. Fish biologists predict that the Atlantic salmon run in the Penobscot — still the largest in the United States, which says a lot about the status of wild Atlantic salmon in this country — will increase from a few thousand to 12,000.

And not just salmon will benefit. The Penobscot is home to 11 additional species of migratory fish, including sturgeon, eel, and alewife. Atlantic shad are projected to increase from a few thousand to a few million.

In other words, from the perspective of fish, the basin will be transformed.

The basin will also be transformed from the perspective of those people who care about the fish, who depended on them in the past and may be able to intertwine their lives and livelihoods with the fish once again — the Penobscot Indian Nation, along with commercial and recreational fishers, guides and businesses that cater to anglers, and anyone who thrills to the knowledge that salmon and other wild fish are again surging up the river.

The Penobscot had witnessed decades of battles over individual dams between hydropower companies and those advocating for the fish (the Penobscot Indian Nation, government agencies and conservation organizations) — battles that were never resolved to anyone’s satisfaction and left the parties entrenched in their positions.

Last decade, PPL Corporation purchased most of the dams on the river, setting the stage for another confrontation about the dams and salmon.

But this time around, the parties agreed to look for solutions at the scale of the whole system.

The solution they found — the dramatic restoration of the river for fish — is an amazing story.

Even more amazing is that, even with the removal of three hydropower projects (two dam removals plus the decommissioning of one powerhouse), the forecasted energy generation from the basin will remain at least the same, and could potentially even increase.

The scope of this win-win solution could never have emerged from a debate centered on a single dam. But by moving to the scale of the overall system, a broader set of potential solutions became possible.

In this case, the dams that were most problematic for fish migration were removed or bypassed, while the dams that remained — which have lower impacts on fish — will see an increase in generation due to capacity upgrades and operational changes.

Much of the coverage of the Penobscot (for instance, see the The New York Times story) has not mentioned the energy generation part of the story. The restoration component is so impressive that the Penobscot dam removal story can stand on its own.

And for developed countries such as the United States, the lesson of the Penobscot shouldn’t be that dam removal is only possible if the energy generation is made up elsewhere.  Rivers in the United States have been so thoroughly dammed that there are plenty of places where our society can decide to rebalance a river by removing dams and restoring fish — simply for the value of releasing a river to flow free again.

But the real value of the Penobscot’s example may be for countries that are just now beginning to plan and build dams.

The Penobscot story illustrates a basic principle: within a river basin, there may be multiple ways to achieve a given energy target, and these alternatives can have dramatically different environmental impacts.

Consider the figure below: 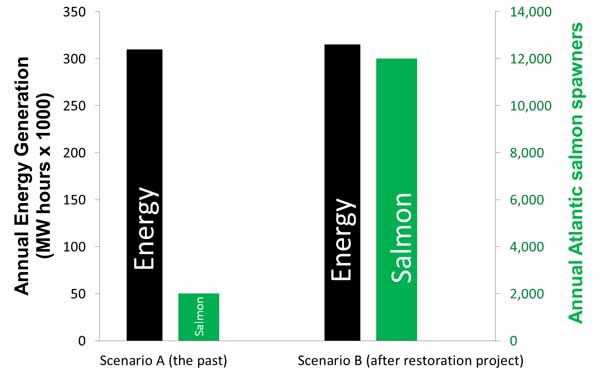 Scenario A represents one way of reaching an energy target, the path that the Penobscot followed for a century. Scenario B represents the recent breakthrough agreement.

The graph tells those countries just now undergoing hydropower development that, within a given river basin, that development can follow multiple pathways.

Through collaborative dialogue and the search for solutions at the scale of whole river basins, these countries have the chance to identify those pathways that provide the best balance across the multiple benefits that rivers provide.

While those choices may rarely be as stark and dramatic as Scenario A vs. B for the Penobscot, there will generally be some options that can provide a healthy balance.

Unlike the Penobscot, these basins have the chance to find the best path the first time around

Make Lithium Extraction in the U.S. “Smart from the Start”

Energy Matters: The Importance of Mitigating the Land Impacts of Energy and Extraction