The Question: Market demand is generally viewed as a negative for the environment — what the consumer wants, the consumer gets, regardless of the impact on natural resources. Just look at how any number of resources have diminished over decades of increasing demand, whether renewable (forests, fish) or non-renewable (oil, minerals).

But can market demand — with a little help from local fishing practices or regulation — give people what they want and have natural resources actually get healthier in the process? That was what researchers found in La Paz, Mexico, where consumer demand for plate-sized Pacific red snapper is transforming a fishery.

Study Nuts and Bolts: In La Paz, increased tourism and local incomes has created a high demand for plate-sized, or medium, fish at restaurants, which has driven the market price for those fish up as much as 13% higher than for other sized fish (see chart below).

The researchers hypothesized that this increased demand for plate-sized fish could actually improve both fish stocks and fishermen’s incomes by shifting fishing pressure away from small and large fish. Small fish are needed to grow up and reproduce, while large fish produce a disproportionate number of offspring for their size. Medium-sized fish may be just right for fishing. To test this, they used daily records of catch from fishermen and information about market prices and then estimated the impact of four different harvest scenarios on both fish stocks and revenues. 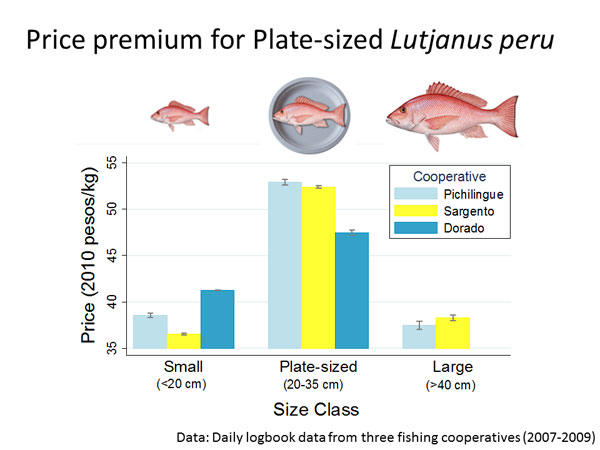 What They Found: Market prices did shift fishing pressure to different sizes of fish: The researchers found a 6% increase in the supply of medium, or plate-sized, fish in the fishery and a 4% decrease in numbers of large fish. This market-driven harvest increased fishermen’s revenues by 14%, but decreased total fish biomass by -3% — making it unsustainable in the long term. Even though fewer medium-sized fish were being harvested, it was not enough to benefit the fish population.

However, by investigating another modeling scenario, the researchers found that encouraging a 5% increase in fishing for plate-sized fish over natural market demand, while proportionally decreasing the amount of small and large fish that could be caught, would result in an increase in fish biomass by 28% and fishermen’s revenues by 22%. Some fishing cooperatives in the area already encourage this sort of selectivity and government regulations could also be used to complement these efforts. The researchers recommend piloting this approach in the La Paz Pacific red snapper fishery.

What Does It All Mean? Catch of red snapper in La Paz has increased 100-fold since the 1950s, and plate-sized red snapper is the preferred fish at restaurants and hotels in La Paz’s tourist zone. A sustainable approach to fishing is needed to prevent fishery collapse as has happened in other areas, such as New England cod fisheries.

The novel approach developed by the researchers — integrating natural market forces with institutional regulations — could result in a sustainably managed red snapper fishery in La Paz, and be a model for other fisheries or resource areas.

“Most studies of how market forces impact the environment focus on reducing consumption — it’s rarely been shown that economic growth can be positive for both nature and people,” explains lead author Sheila Walsh Reddy, a sustainability economist with The Nature Conservancy. “This study shows that natural market demand can be a force for good, if necessary institutional conditions are present.”